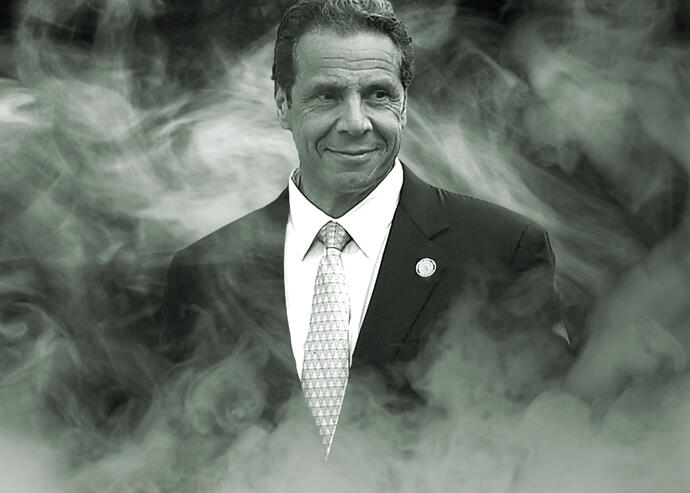 How legal cannabis will shake up NY’s retail landscape Somewhere in the East Village, a pizza joint slings cannabis-infused pies in a speakeasy-like environment.

Stoned Gourmet Cannabis Pizza — the brainchild of the so-called “Pizza Pusha” Chris Barrett — has operated in a sort of gray area since it opened last October. Reservations are made by direct messaging with a private Instagram account, which captures photos of guests lighting joints and dining on THC-infused pepperoni pizza and “Ganja” (Garlic) Knots. On one wall is a red neon sign that reads “Either light up or leave me alone.” And police have, thus far, looked the other way.

The establishment is one of an unknown number of underground marijuana speakeasies in the city. But with recreational marijuana now legal in New York, those businesses may be able to emerge from the darkness — and enter a retail landscape that’s desperate for business.

State lawmakers recently passed a bill, which was quickly signed by Gov. Andrew Cuomo, that legalizes cannabis usage and sales. Dispensaries and “consumption sites” — i.e., pot cafes — are now allowed, along with changes like the loosening of medical marijuana restrictions.

But there’s more than just smoke in the air; a framework for what this might look like is still being hashed out by a newly formed Office of Cannabis Management will be tasked with overseeing licensing, public health, equity and regulation. Some things — like smoking in public — are legal now, but bigger changes may take years to implement.

Here’s what pot purveyors may be facing as they seek to enter the New York market.

Dispensaries and lounges are still a ways off from getting up and running; it’s estimated that they would be able to open by 2022 at the earliest. But the injection of legal cannabis into New York’s retail market may have landlords seeing green.

By 2023, the market for cannabis in New York state is estimated to be worth $4.6 billion a year, with about 350 retail licenses expected to be issued, according to a report by MPG Consulting prepared for the New York Medical Cannabis Industry Association.

But by 2027, the report estimates the number of licenses will balloon to 900, with market size expected to grow to $5.8 billion. The total economic impact by 2027 could be upwards of $10 billion.

“Those landlords have a desired commodity, as opposed to the landlords that are close to a school, close to a house of worship or in a community [with a] board that goes ‘Not in my backyard,’” Delsack said.

With pandemic-spurred storefront vacancies increasingly prevalent in New York City, the legal cannabis industry will present a new option for retail landlords, many of whom have seen rent revenue fall during the past year.

Greg Tannor, a principal and executive managing director at commercial real estate brokerage Lee & Associates, has been looking for landlords willing to rent to cannabis retailers. So far, he has vetted 150 property owners across Manhattan and Brooklyn.

Legalization is “really going to help some of the mom-and-pop landlords out there that have been struggling for years and years with vacancy,” Tannor said.

“It’s a feeding frenzy right now because of the vacancy rate in the city, and this is just a great program to absorb that,” he added.

New York law reserves a portion of the business licenses for minority applicants, and those affected by marijuana-related policing. Still, there’s an expectation that larger corporations will be attracted to New York.

“Unfortunately, I think the trend away from these smaller businesses with character could well continue,” said Joseph Bondy, a criminal defense and cannabis business attorney of an eponymous law firm.

But there may be challenges. Opening a dispensary or lounge requires flexibility from a landlord; applicants must show that they have possession of the premises 30 days after having their license approved, either through a lease or through owning a property.

And not all landlords can house marijuana retailers. Because federal law still prohibits the sale of marijuana, properties with federally chartered loans and mortgages can’t rent to dispensaries.

Openings may also have an impact on surrounding businesses, attracting some while repelling others.

“That’ll be something interesting to see in New York that we don’t necessarily see in more suburban-type markets,” said Barry Wolfe, the senior managing director of investments at Marcus & Millichap, who has worked with marijuana retailers and investors in other states.

Like tobacco stores, marijuana retailers cannot be within 500 feet of a school or church, per the legislation. No other locations are forbidden.

But cities and towns can use their zoning authorities to determine where dispensaries and other retailers can be. That could involve placing dispensaries on the outskirts of towns, as adult businesses often are, or spreading the retailers out to avoid a cluster of businesses in one or several locations.

“You may want to look at site plan issues, traffic control, parking. You may want to look at buffering, what should and shouldn’t be seen from the road,” said Patricia Salkin, a professor of law at Touro College’s Jacob D. Fuchsberg Law Center and an expert in zoning. “It just depends upon how welcoming the community is.”

Localities can also choose not to allow dispensaries and sites for consumption altogether — the legislation has a provision allowing municipalities to opt out of retail sites by Dec. 31, though they may later reverse that decision. Some Long Island towns have debated opting out, while others have said they will examine new zoning laws concerning where retailers could set up shop.

Barrett’s cannabis pizza restaurant might lose its clandestine vibe once consumption sites are given the green light to operate in New York City.

Under the approved legislation, dispensaries will need to have a separate license to allow for on-site consumption. Similar to liquor stores and bars, there are separate categories for where consumers can buy the product and where they can consume it. And as of now, laws also prohibit the sale of food and beverages at cannabis lounges, though that could change as the Office of Cannabis Management firms up regulations.

It “is disappointing for the restaurant industry and any existing hospitality industry,” said Robert Bookman, a partner at Pesetsky & Bookman and the general counsel of the New York City Hospitality Alliance.

But Barrett’s restaurant could follow the model of the Coffee Joint in Denver, which bills itself as the city’s first “licensed consumption lounge.” The cafe is located next to a dispensary, where customers can purchase edible cannabis products or THC concentrates, and then consume them at the cafe for a small fee.

Rita Tsalyuk, the Coffee Joint’s CEO, said the establishment does not bring in much profit, unlike the dispensary next door, but she runs it to educate the public by showing that marijuana can be consumed responsibly.

“Sometimes you just do things that don’t bring you money and we think that we were very successful in it because it really accomplished what we wanted to,” Tsalyuk said.