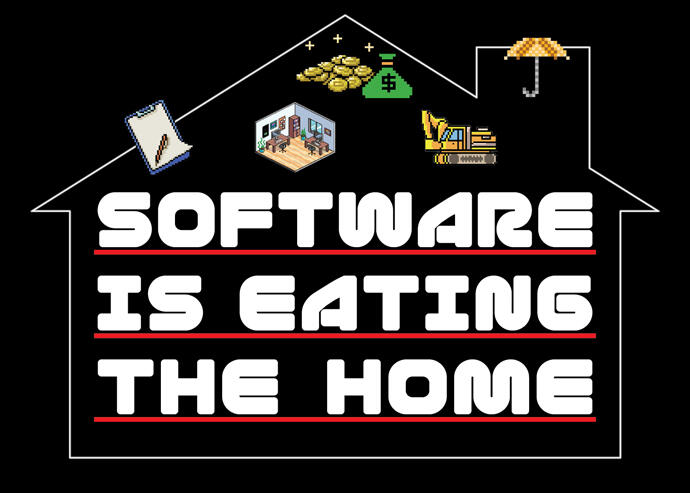 Why software is eating the home Less than a decade ago, startups valued at $1 billion or more were so rare — so mythical even — that the tech world took to calling them unicorns. In 2013, there were just 39 such magical creatures, a number that has since surged to more than 600.

Residential real estate, a longtime tech desert, had but a couple over the years.

But in the last eight months, four proptech startups focused on the residential industry have hit valuations of $1 billion or more. Three others – Airbnb, Compass and Lemonade – have gone public. Another 10 have plans to merge with blank-check firms, in deals valued collectively at $38.5 billion. Investment in technology aimed at streamlining how we buy and sell homes has exploded. Buyers can view homes without stepping foot in the property, get approved for a mortgage online, obtain title insurance in minutes and notarize documents remotely. iBuyers are enticing customers to sell their homes — lock, stock and barrel — with a few clicks.

A decade after the Silicon Valley legend Marc Andreessen proclaimed that “software is eating the world,” software is now eating the home.

“It’s the golden age of real estate tech in many ways,” said Errol Samuelson, chief industry development officer at Zillow Group, which kicked off the first era of residential proptech by putting listings online in 2006.

“If you can disrupt with technology,” he added, “and do it better, faster and cheaper, everyone wins.”

Natural adoption of tech over time was compounded by pandemic-induced forced adoption.

Dave Eisenberg, co-founder of Zigg Capital, said it’s unlikely businesses will keep growing 300 percent year-over-year. But it’s also not likely, he said, that “people who adopted these solutions will go back to a less efficient way of doing things.”

The numbers don’t lie. Investors poured $3.9 billion into 89 U.S. proptech deals during the first quarter of 2021, according to Pitchbook. That’s more than double the $1.7 billion invested through 87 deals in the preceding quarter.

Fifth Wall, the biggest player in the space, has $1.7 billion under management and recently began raising more than $100 million for a European tech fund. Camber Creek, which has backed Latch (smart locks), Notarize (e-notaries) and Darwin (property management), raised $155 million in October for its third and biggest fund to date. And Zigg Capital, which has backed Spruce (title insurance), Kasa (short-term rentals) and Tomo (mortgages), closed a $225 million fund last month after investing its first $100 million fund into 25 startups over three years.

Some of Silicon Valley and Wall Street’s biggest players are also pulling up a seat to the table.

“Sophisticated, fast-moving groups who primarily invest in the public market are crossing over into the private markets,” said Eisenberg, who sold his 3D mapping startup Floored to CBRE in 2017.

In January, Coatue and Tiger Global led a $300 million investment in digital lending startup Blend. A month later, Tiger led a $110 million round in Divvy, a rent-to-own startup. Coatue has since led a $150 million round in Side, a white-label brokerage, valuing the firm at more than $1 billion.

Last month, Notarize raised $130 million at a $760 million valuation after business surged 600 percent year-over-year. The round was led by Canapi, with participation from Alphabet and Wells Fargo.

“The financial industry recognizes that transactions are changing,” said Camber Creek’s Jake Fingert. “They need to be ahead of the curve … otherwise they might get run over by some of these changes that are coming and changes that consumers are demanding.”

The proptech sector notched 80 exits last year, double the number in 2017, according to Camber Creek.

when the iBuyer went public in December. Filings show Khosla invested $40 million starting in 2014; its 8.5 percent stake was worth $1.4 billion after the IPO.

Homebuilder Lennar is poised to reap $1.5 billion from a series of proptech investments and partnerships, the Information reported. During a March 17 earnings call, CEO Stuart Miller said although the gains are “sizeable,” the deals have helped Lennar “re-engineer our own operating platform for improved performance.”

More than 50 blank-check firms are hunting for proptech (or adjacent) deals, according to an analysis of filings by The Real Deal. So far, a dozen have struck deals with companies including Opendoor, Doma (title insurance), Offerpad (iBuyer) and Latch.

Brendan Wallace, co-founder of Fifth Wall, an investor in Opendoor, Doma and SmartRent (home automation), said the availability of high-quality targets is telling.

“Many real estate tech businesses have matured,” he told TRD earlier this year.

High valuations, he said, reflect the size of the opportunity. Real estate makes up 13 percent of the U.S. economy but the sector only spends 0.5 percent on IT.

To that end, some investors are betting on market makers.

That was the case with Airbnb – which has a $110 billion market cap after its 2020 IPO — and Opendoor, whose market cap tripled to $12.4 billion after its merger with Chamath Palihapitiya’s SPAC. (In recent weeks, Opendoor’s stock has dropped 35 percent from its IPO.)

Pacaso, which allows buyers to purchase a fraction of a second home, seems headed in that direction. Founded in October 2020 by former Zillow CEO Spencer Rascoff and Austin Allison, Pacaso raised $75 million at a $1 billion valuation, becoming the fastest startup to achieve unicorn status.

“They’re building a new category,” said Sarra Zayani of Global Founders Capital, which led the round with Greycroft.

Allison said “there’s no question” the funding environment is favorable for high-growth businesses right now. But he said valuations primarily reflect a company’s “prospects for the future.”

“When you look at Pacaso through that lens,” he said, “I don’t think it’s actually that aggressive.”

You’ll hear a lot of how the pandemic forced the real estate industry to adopt technology it long resisted. The reality is more nuanced.

“It’s almost like a tipping point that’s been 10 or 15 years in the making,” said Max Simkoff, CEO of Doma.

Ideas related to mortgage and title, for example, popped up after the 2008 housing crisis. But many took off only after fintech startups paved the way.

Assaf Wand, CEO of insurtech startup Hippo, said he wanted to take on homeowners insurance in 2007, but was stymied by a lack of data and back-end technology. By 2015, he was able to build Hippo using cloud computing via Amazon Web Services (AWS) and Stripe’s payment processing platform.

Hippo now sells direct to consumers, but also works with homebuilders, insurance companies and lenders. “At a certain point in the flow, when [buyers] are asked to upload proof of insurance or get a quote, Hippo is one of those options,” he said. Wand’s company is set to go public through a $5 billion SPAC merger led by LinkedIn co-founder Reid Hoffman and Zynga founder Mark Pincus.

Technology isn’t a “nice to have,” anymore, said Amit Haller, CEO of Veev, a modular building startup. “As an industry, we either innovate or die.”

It’s not all upside, however. AI and automation can lead to some soul-searching about headcount, creating anxiety for many middlemen.

Multifamily landlords, some facing high vacancy rates, are embracing property management tools as a way to tighten their belts. “Then it’s like, ‘I have a maintenance, leasing and property manager?’” said K.P. Reddy, founder of Shadow Ventures. “What are all these people doing?”

Real estate agents, in particular, have been wary of the tech threat ever since Zillow and Trulia started putting listings online. Samuelson said Zillow doesn’t “view it that way,” and believes tech-savvy agents will be able to grow their businesses.

In its latest iteration, dubbed Zillow 2.0, the company hopes to be a one-stop shop for residential transactions. Other startups, such as Opendoor, Compass, and Blend, have similar world-building ambitions.

One startup founder, speaking on the condition of anonymity, questioned the wisdom of funding  such startups, which seem to be building “end-to-end” platforms because their core business is not profitable without added services.

“Everybody can’t be everything to everybody,” the founder said.

Brad Hargreaves, CEO of co-living and property management startup Common, said the cynical take is that it costs nothing to promise investors the moon. Latch’s investor deck, for example, describes a business that extends far beyond smart locks. “Can they grow from being a lock company to owning everything in a renter’s home? Maybe,” he said.

Hargreaves said Apple and Google compete with multifaceted platforms, so there’s no reason it can’t happen in real estate. “The question then,” he said, “is which foundation is the best on which to build these things.”