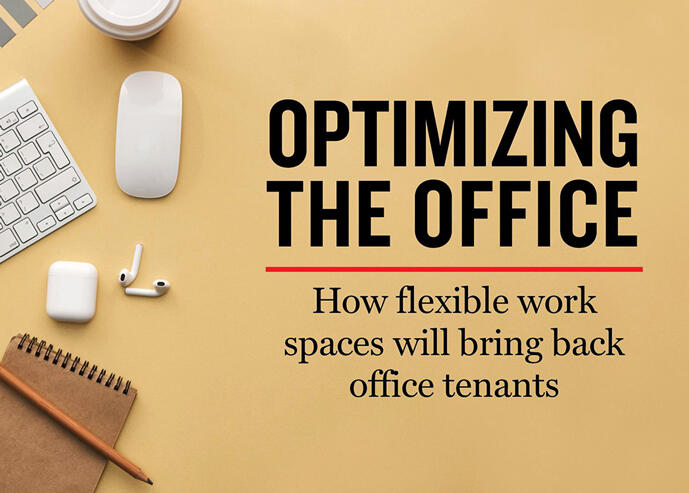 Optimizing the office: How flex workspaces will bring tenants back Companies have accepted that work-from-home is here to stay. Commercial landlords need to stay relevant. Enter the flexible office.

TRD Brand Studio will host its first virtual event, Optimizing the office: How flexible workspaces will bring back office tenants, on Tuesday, May 4 at 2 p.m. EST. This live event will feature executives from Essensys, IWG, Industrious and Studio by Tishman Speyer discussing the challenges and possibilities of the new office normal. Buy your ticket today! Michael Beckerman is the CEO of CREtech, the largest global consulting, media and conference company devoted to technological innovation in real estate. CREtech’s mission is to help the industry future-proof its businesses and inspire the next generation of ideas, processes and people in the world’s largest asset class. Beckerman also leads the CREtech Climate, the firm’s newest initiative to galvanize the industry’s commitment to reducing its carbon footprint. Jeremy Bernard is the CEO of North America at essensys, the world’s leading provider of flexible workspace software. He has over 25 years of experience in real estate and tech. Most recently, Jeremy was global head of real estate for Knotel, where he grew a portfolio of 5.5 million square feet of flexible office space around the world. He previously held C-suite positions at real estate investment firms and launched several proptech companies. He lives in Westport, Connecticut, with his wife, Jamie, daughter, Morgan, and son, Brody. Anna Squires Levine is the chief commercial officer at Industrious where she oversees operations, sales and marketing. Prior to that she was general manager of coworking and head of growth. Before joining Industrious, Levine co-founded Run for America, a bipartisan political consulting firm for the next generation of congressional leaders. She was also the founder and president of Born Free Africa, a private initiative to end pediatric HIV. Wayne Berger is the CEO of global coworking leader IWG plc: North America and Latin America. The company harnesses the power of flexible working through its companies Regus, Spaces, No. 18, Open Office, HQ and Signature by Regus. Wayne has been an advocate for revolutionizing the workspace. With over 20 years in multinational leadership roles, he has helped companies maximize their offices and communities, spearheading the shift from traditional offices to flex workspaces. Michael Caracciolo is the senior director of Studio by Tishman Speyer, an arm of the real estate giant that offers flexible workspaces from flex desks to private offices to customized suites.