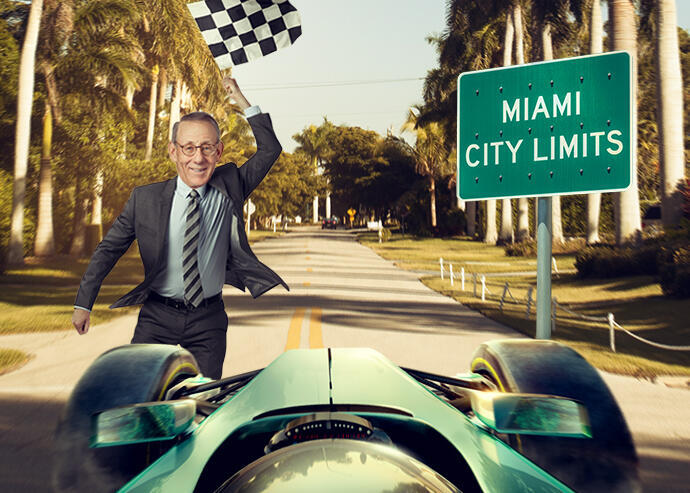 Formula One’s plan to race in Miami starting next year has developers and brokers ready to kick their marketing efforts into high gear to appeal to the fast-driving crowd.

Efforts to bring the elite race to Miami culminated this month with a city vote that clinched a 10-year deal at Hard Rock Stadium with Related Companies’ chairman and founder Stephen Ross. The approval followed years of negotiations and opposition.

Exotic cars are synonymous with high-end Miami real estate and nightlife, and F1’s fan base could bring thousands of new prospective buyers to South Florida. For developers, brokers and hotels, the opportunities for sales, sponsorships, booths, events, partnerships and more seem endless.

“It’s like having a contract for the Super Bowl for 10 years,” said Alicia Cervera, managing partner of Cervera Real Estate, which is handling sales and marketing for the Aston Martin Residences in downtown Miami. “It also brings spectacular clientele that takes millions of dollars in marketing to attract.”

Now, the first Miami Grand Prix is expected to run in the second quarter of next year, following Art Basel in December, the Miami International Boat Show in February, and the Miami Open in March.

“If it’s in that order, that’s a really good cadence of world-class focus on the community,” said Scott Berman, a principal at PricewaterhouseCoopers, who leads the firm’s hospitality and leisure practice. “As we get closer to the June, July and August months, we need demand drivers.”

Berman and others said that F1’s reach around the world – in China, Brazil, the Middle East and Latin America – will attract new tourists and real estate buyers.

“The indirect impacts really born from the media exposure, social and digital marketing campaigns, and television, are far greater than a single day event,” Berman said. “If it becomes an annual ritual, can’t-miss type of weekend, that bodes very well for the hospitality community.”

During last year’s Super Bowl, hotel rates soared, in some cases up to thousands of dollars per night.

Broker Craig Studnicky of Related ISG said the announcement “puts a further exclamation point on the fact that Miami is becoming a world-class city.”

He said it’s not uncommon for developers to tap top tennis players in town for the Miami Open, and he expects the same will happen during the week of the race – though it may be hard to pin down top driver Lewis Hamilton, for example.

Valerio Morabito, who is partnering with luxury car dealer Ugo Colombo on a condo development in Bay Harbor Islands, said there will be a “waterfall” of opportunities.

He said that the first thing new wealthy residents do is buy a beautiful car, and more buyers are now requesting larger and nicer garages to go with their units.

“There’s a lot of car lovers, and this is going to obviously do even more for the city when it comes to that,” Morabito said. “People have a true passion here in Miami for that.”

You can bet we’re going to be there with a strong presence.

Porsche Design Tower developer and car collector Gil Dezer, who recently revealed plans for his Bentley-branded condo tower in Sunny Isles Beach, said the race will bring out-of-towners who “follow what they love and spend money on it,” much like Art Basel Miami Beach brings art collectors who end up buying real estate.

“You can bet we’re going to be there with a strong presence,” Dezer said, adding that the indirect economic impact will be “way bigger” than the Super Bowl.

Formula One has dipped its toes in Miami before, and the organization initially proposed racing in downtown Miami, but was faced with significant opposition.

Kevin Venger, a co-developer of the Zaha Hadid-designed One Thousand Museum in downtown Miami, has been a big advocate of bringing the race to Miami, particularly to downtown. In 2018, F1 and Red Bull took over the condo tower’s rooftop helipad, where a driver did donuts as a public relations stunt.

“What it’s going to do for a real estate standpoint is draw more and more diversity and international clients,” Venger said. “Selfishly, I would like it to be downtown, but it doesn’t matter where it ends up.”

Since lockdowns were lifted last summer, South Florida real estate, especially the luxury sector, has largely benefited from the pandemic. The region is experiencing a wave of new residents from high-tax states, and high-end leisure hotels bumped their rates as demand rose.

Now, the F1 race is expected to speed up that movement.

“I think the way to encapsulate it best is, imagine how difficult it would be to get the Super Bowl to commit for 10 years,” Cervera said. “This is a Super Bowl for the world.”