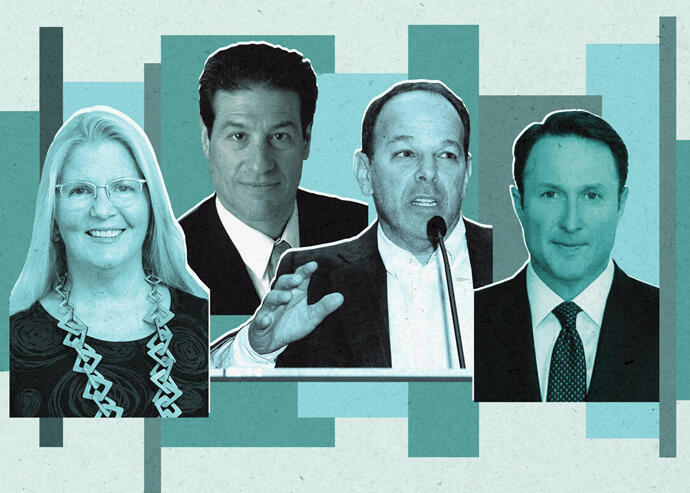 The biggest investment sales deal of the year didn’t even involve brokerages.

The e-commerce giant did a direct deal with the seller, a joint venture of Rhone Capital, Hudson’s Bay Company and WeWork, which originally planned to renovate the 660,000-square-foot building to use as its corporate headquarters.

The deal, which worked out to about $1,480 per square foot, closed on March 12, just one week before Gov. Andrew Cuomo ordered all nonessential businesses, including real estate firms, to pause in-person activities as Covid-19 spread throughout the city. New York City’s investment sales market, already navigating a slow few years, took a big hit, with big deals stalled or falling apart altogether.

“All the deals that were supposed to close in any level — bigger deals, smaller deals — most of them were delayed,” said Shimon Shkury, president of Ariel Property Advisors, which tracks the city’s investment sales market. “You started seeing closings occurring slowly but surely from May all the way throughout the year.”

For 2020, The Real Deal’s annual ranking of the city’s investment sales brokerage firms focused on transactions at or above $100 million. By that metric, CBRE claimed the top spot, brokering $3.13 billion in deals. The firm’s performance in the trophy sales category actually outpaced 2019, when it notched $2.73 billion in $100 million-plus deals.

Cushman & Wakefield, which came in first in TRD’s 2019 ranking, relinquished the summit this year, with $2.51 billion worth of trophy deals. Its haul was down 66.5 percent from 2019, when the brokerage negotiated $7.49 billion in sales above $100 million. Eastdil Secured rounded out the top three brokerages, with $820.6 million in $100 million-plus sales.

Top brokers adapted to the challenging year by changing their strategies, targeting different sectors or types of buyers and hustling even more than in years past.

“What we did last year was … go look at the ultra-high-net-worth [buyers],” said Darcy Stacom, the head of  CBRE’s New York capital markets group and the firm’s top broker. “They have the money. They don’t have giant investment committees. They don’t have people that worry about their jobs. They just have individuals who can look at the fundamentals of a market.” Stacom took that approach to find SL Green Realty a buyer for its retail condo at 609 Fifth Avenue, which sold to London billionaires David and Simon Reuben for $170 million. The investors — among the U.K.’s richest people — weren’t turned off by the pandemic or doom-and-gloom stories about a retail apocalypse.

Broadly speaking, massive office deals dominated when it came to $100 million-plus sales in 2020. Prices for Manhattan’s Class A office buildings actually rose to $1,200 per square foot on average in 2020, up 9 percent from 2019, according to Colliers International.

Trophy office deals helped CBRE claim its top spot; the firm was involved in two of the three largest investment sales deals of 2020. It negotiated the second-biggest deal of the year: SL Green’s sale of 410 10th Avenue for $952.5 million. Buyer 601W Companies paid about $1,550 per square foot for the 20-story office building, which is anchored by Amazon.

In late February, CBRE brokered the $900 million sale of a 40-story office tower at 330 Madison Avenue, with Stacom and her partner Bill Shanahan representing the seller, Abu Dhabi Investment Authority.

Cushman’s biggest office deal came in July, when it represented Westbrook Partners in the $435 million sale of the office building at 1375 Broadway. Buyer Savanna paid $864 per square foot for the 27-story Garment District property.

Eastdil’s largest deal was the sale of a 10 percent stake in Paramount’s 1633 Broadway. The $240 million transaction, which closed in April, valued the 48-story office tower at $2.4 billion. The firm also finalized the $200 million sale of an office building at 44 Wall Street to Dallas-based Gaedeke Group shortly before the pandemic took hold. Along with Hodges Ward Elliot, Eastdil’s Will Silverman and Gary Phillips closed the deal on behalf of the seller, Blackstone Group. Phillips said that the firm “consistently erred on the side of overcommunication” as deals moved online.

Newmark, which ranked No. 4, also started the year with notable office deals, including a $175 million leasehold sale at 111 Wall Street that closed in mid-January. Newmark’s Jimmy Kuhn, Bill Lee, Brett Siegel and Evan Layne represented the seller, Zurich Insurance Group. The buyer was a joint venture between Nightingale Group and Wafra Capital Partners, a subsidiary of the Kuwaiti sovereign wealth fund.

The firm also represented Savanna in its sale of 434 Broadway, an office-retail building in Soho, to a joint venture of Tokyo Trust Capital and MC Real Estate Partners, for $103.5 million. In total, Newmark notched $423.5 million in $100 million-plus sales.

Step outside the office

CBRE may have dominated when it came to trophy office sales, but other firms turned to other sectors for their big 2020 deals.

Cushman had success in the industrial and multifamily markets. In early 2020, Cushman’s Doug Harmon, Adam Spies and Kevin Donner represented Angelo Gordon in the $420 million sale of a stake in Industry City in Sunset Park. Singapore’s GIC sovereign wealth fund bought the stake, which reportedly valued the sprawling industrial park at $1.3 billion. And in November, Spies, Harmon and Donner, along with Josh King, Adam Doneger, and Marcella Fasulo, represented the Related Companies in its $435 million purchase of a two-building, 500-unit complex at 265-275 Cherry Street on the Lower East Side. The deal was Manhattan’s biggest multifamily trade of the year.

“The assets that became most desired last year were those with the highest degree of certainty and defendable cash flows,” Harmon said. “The Cherry Street transaction demonstrated that in the big city, ‘affordable’ jumped to the top of the sought-after heap.”

Despite multifamily’s diminished appeal for investors, some large apartment deals closed. Aaron Jungreis’ Rosewood Realty Group, which came in at No. 5 in the ranking, negotiated two $100 million-plus multifamily deals totaling $318.8 million. The larger of the two was the $196.3 million sale of a 48-building portfolio concentrated around the northern edge of Central Park in Manhattan. Josh Gotlib’s Black Spruce Management bought the portfolio, which includes about 675 units, from the Orbach Group. Rosewood represented both parties, according to Jungries.

In Newmark’s case, a Williamsburg retail portfolio formerly owned by RedSky Capital was the major nonoffice deal. In a deed in lieu of foreclosure, the embattled developer handed the keys back to its mezzanine lender, BlackRock, which then partnered with Chicago-based investor L3 Capital. That joint venture paid $145 million for the 14-property portfolio near North 6th Street and Bedford Avenue. Newmark’s Siegel and Layne represented BlackRock in collaboration with Newmark’s debt team of Dustin Stolly and Jordan Roeschlaub.

“As values have been impacted as a result of Covid, [the line] where debt ends and equity begins has been blurred,” Siegel said. “Our collaboration with our partners on the debt side has been incredibly important. And as a result, we’ve gotten a lot of businesses done.”

That was true for JLL, which came in sixth in the ranking with $228.6 million in $100 million-plus deals. The firm brokered the $117.8 million sale of a 14-acre industrial site at 980 East 149th Street in the Bronx. Seller Turnbridge Equities formed a joint venture with buyer Dune Real Estate Partners to develop a last-mile distribution center on the site. JLL’s Christopher Peck, Peter Rotchford, and Kristen Knapp arranged the debt financing, while their colleagues Andrew Scandalios, Tyler Peck and Thomas Pryor arranged the equity financing.

“It was about survival”

Deals still got done in 2020, but some firms experienced major setbacks once the pandemic took hold. At the beginning of the year, Cushman was gearing up to close an $815 million deal for the Daily News building at 220 East 42nd Street on behalf of seller SL Green. Buyer Jacob Chetrit wired his $35 million deposit to an escrow account in early March. But just a few weeks later, New York went into lockdown, and Chetrit’s principal lender, Deutsche Bank, backed out, causing Chetrit to withdraw his offer.

After the deal fell apart in March, SL Green sued Chetrit in an attempt to get the deposit, as Chetrit refused to release it. But the parties eventually settled the dispute. SL Green is keeping the building for now and refinanced it with a $510 million mortgage from Aareal Capital, Citi and Crédit Agricole.

Facing rapidly deteriorating market conditions, commercial real estate firms across the board were forced to make tough decisions to survive. CBRE and Cushman both announced sizable layoffs at the beginning of last year. Then, once the pandemic hit, more layoffs hit the smaller commercial firms, including Meridian Capital Group, B6 Real Estate Advisors and Avison Young. In May, Eastdil reduced its global headcount by 7 percent.

Around the same time, JLL laid off roughly three dozen people in New York City’s capital market division — and that was just the beginning. As agents struggled to close deals, investment sales brokers Brock Emmetsberger, Tom Gammino and Will Suarez were laid off in October, sources told TRD at the time. A couple of months later, Gammino and Emmetsberger were hired by B6, the investment sales-focused brokerage run by their former boss at Massey Knakal, Paul Massey, while Suares joined Avison Young.

JLL declined to comment on layoffs, but in an internal email reviewed by TRD, the company stated that structural changes and staff reductions are “difficult and painstakingly considered.”

“Ultimately, we have a responsibility to remain competitive as markets shift, to preserve the strength and resilience of our business and to support our people through this period of uncertainty,” the email read.

Jungries of Rosewood Realty said he has managed to keep his staff intact, but it hasn’t been easy.

“I didn’t do [layoffs]. But It was hard not to,” he said. “It was about survival. And a lot of people could not even survive last year.”

Beyond beds, sheds and meds

It’s too early to say what 2021 will hold for the i-sales market, but brokers think it’s unlikely that it will be as difficult as 2020 was — particularly as more Covid-19 vaccines are distributed.

“If you just look at quarterly activity, I think it is fairly clear that the third quarter of 2020 will be viewed as the absolute bottom of the market in terms of sales volume,” said JLL’s Bob Knakal, who co-leads the firm’s New York City investment sales division.

He noted that according to market research, the dollar volume of Manhattan transactions above $10 million in the fourth quarter more than doubled from the third quarter, and the number of transactions almost doubled, too. “We expect that trend to continue,” Knakal said. “We’re seeing a lot of activity.”

Newmark’s Siegel noted that more distressed properties “that otherwise would not have been brought to the market” may make up more deals as lenders stop offering forbearance to their borrowers.

“There’s certainly the expectation that there’s a lot of activity coming in the next few quarters,” he said.

CBRE’s Stacom said property types traded this year will be beyond “beds, sheds and meds” — meaning residential, industrial, and life sciences or medical — because investors have driven up prices of those properties.

Citing Enterprise Asset Management’s recent decision to shop the ground lease on its 20-story office building at 360 Park Avenue South, she said, “I think that’s a perfect example of what everybody should do in a market like this.”

“If buildings have vacancy, it’s a good time to go in and reposition them,” Stacom said, explaining that by the time they are ready for new tenants, the market will be on the upswing.

“You build into the depth,” she added, “and you rent into the rise.”

Cushman’s Harmon also said vaccinations will lead the vast majority of employees to go back to offices, making office properties once again an attractive investment option.

“Once the momentum of employees returning to the city is evident, that will dovetail directly to the recovery of office investments of all shapes and sizes,” he said. “The fourth quarter of this year will be a busy and exciting time to be living, working, visiting, enjoying and investing in New York.”