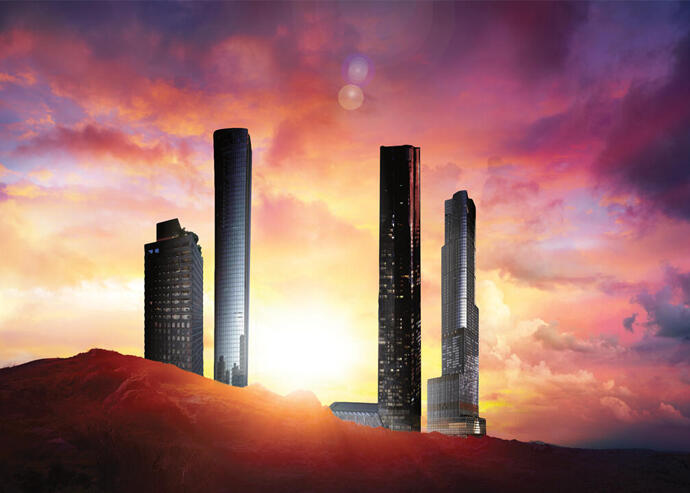 On a warm March afternoon, Compass broker Clayton Orrigo was zooming, quite literally, between appointments in the West Village on an electric scooter.

“That’s the only way I can get around fast enough,” he said during a mid-ride phone call.

Many Manhattan residential brokers echo the sentiment; they’ve never been busier. Demand has finally picked up, which means a hefty schedule of showings, fierce negotiations and hurried contract signings. Even bidding wars are back.

It’s not just the optimistic rhetoric all agents seem to share. After a year of depressed activity and headline after headline announcing another company or well-heeled individual moving out of New York, data bears out the uptick.

Manhattan home sales in the first quarter of 2021 surpassed those in the first quarter of 2020 by 2 percent. The increase was largely driven by condo deals, particularly in new developments, according to data from Douglas Elliman. While 2 percent is not dramatic, units in the borough are getting snatched up at the fastest pace in six quarters, and the number of new development closings jumped 9 percent year-over-year.

In March alone, buyers signed contracts to purchase 400 sponsor units across Manhattan, Brooklyn and Queens, according to Marketproof, which tracks condo sales in the city. March’s contract activity was the highest since the firm began tracking it in 2015. So far, April is maintaining that pace.

What started as an uptick at the low end, largely in Brooklyn, translated into an “incredible” increase in new development units across the three boroughs at all price points, said Kael Goodman, CEO of Marketproof.

Meanwhile, the high end of the Manhattan market, properties asking $4 million and above, saw a 10-week streak in the number of contracts signed, according to Olshan Realty, which has been tracking Manhattan’s luxury market since 2006. Of the 475 contracts inked so far this year, 175 were units being sold by developers.

“People automatically assume that those who have been living in New York City don’t want to be in New York City anymore,” said developer Ben Shaoul, pointing to negative news coverage of the city as the pandemic has worn on. “‘Why the hell would I want to go and buy a new apartment?’ That’s a logical psychology. [But] the reality is that’s exactly what’s happening.”

In late March, Compass broker Boris Sharapan Fabrikant lined up five showings in one day at his new listing at 200 East 32nd Street.

The two-bedroom Kips Bay condo spanned nearly 1,250 square feet and came with two pandemic must-haves: a balcony and in-unit washer and dryer. Fabrikant said there was a full-price offer — $1.75 million — by the end of the day, but the unit went to someone who made an all-cash offer above the ask.

Jessica Chestler, a broker at Elliman, said she has five clients who have each gotten involved in bidding wars since the start of the year. She attributed the additional competition to reasonable pricing. Corcoran Group agent Sydney Blumstein agreed, saying that the pandemic forced sellers to dramatically lower prices. And appointment-only showings have done away with notorious looky-loos, leaving only serious buyers.

“It made the market active again,” she explained. “We were in a flatline market prior to Covid. It was just stagnant.”

Vaccine distribution and unit discounts are the simple answer as to what’s motivating many prospective buyers. But more broadly, New Yorkers who have either stayed put or are returning to the city are increasingly looking to move into larger apartments.

Kelly Kennedy Mack, president of Corcoran Sunshine Marketing Group, said that while location and price used to be the main factors driving buyers, the size of the home and layout have taken over.

“A bigger apartment is more desirable,” she said. “And more attainable than ever.”

Unlike the rest of the country, where home prices continue to climb month after month, Manhattan is flooded with discounts, offering locals who want to trade up, or out-of-towners looking for a pied-à-terre, a rare window of opportunity.

“It’s almost like it’s a FOMO market right now,” said Chestler. “People have a fear of missing out.”

In Manhattan, the median sales price for new developments was $2.1 million in the first quarter of 2021, down nearly 25 percent year-over-year, according to Elliman, which also said the average listing discount grew to 8.6 percent during the same period from 7.8 percent a year earlier. UrbanDigs pegged the median listing discount for condos at 14 percent as of February.

An analysis by Serhant showed the average discount on new development sales was 11.2 percent in the first quarter of 2021, the highest first-quarter level in six years.

But Garrett Derderian, who leads market research at Serhant, said discounts can vary widely between projects. At Fisher Brothers, the Witkoff Group and New Valley’s 111 Murray Street, for example, the average discount was 38 percent; at Lightstone Group’s 130 William Street, where condos are asking between $1 million and $4 million, there are zero discounts.

Many developers find themselves forced to slash prices in order to stay competitive and move units as loans come due.

Related Companies shaved 23 percent off prices at 35 Hudson Yards and 17 percent off units at 15 Hudson Yards, according to the New York Times. In some cases, developers have even accepted that they will make little to no money off their projects. Extell Development’s Gary Barnett and Edward Minskoff of Edward J. Minskoff Equities both told the Times that some of their projects would not be profitable.

Some view the uptick in condo sales as evidence of New York’s long-term resiliency. Donna Olshan of Olshan Realty called the residential market a leading indicator of corporate life and retail in the city.

“If people are coming back to live, they’re going to work in the city,” she said.

“The office revival is clearly lagging [behind] residential, but ringing the bell on the office market’s decline is ridiculous,” she said. “If you’re working in New York … you’re ambitious, you’re creative. That’s not for people who want to sit in sweatpants at home.”

Many are looking to foreign buyers to sustain the uptick in sales in the coming months — or add fuel to the fire.

Mack’s philosophy is that active buyers attract more buyers, and that recent activity will give buyers the confidence to assess a price and move forward with a deal.

“There is so much psychology involved,” she said.

She expects that the excess inventory will give buyers leverage and hold down prices, which should keep the market moving for quite some time.

“Some of this is obviously pent-up demand, but I think it goes further back,” she said. “I think we are just at the start of the pent-up demand that [has] built up over a multiple-year period.”

Now some developers are already looking ahead to the next cycle of condo development.

HAP Investments’ Eran Polack, who’s in the early stages of building a luxury condo in Tribeca, said he’s certain the condo market will bounce back. He compared the pandemic to the aftermath of the Great Recession, when he arrived in New York City.

“I thought, ‘I can do everything better, different,’” he recalled. “I’m sure there’s thousands of thousands of people thinking the same now.”

Shaoul, of Magnum Real Estate Group, said he plans to close on the site of his next luxury condo development in Manhattan within six months, because he believes that by the time a project that starts in 2021 comes to market there will be a shortage of condos in the city.

A PincusCo analysis shows that 2020 saw the lowest number of new condo filings  Manhattan and Brooklyn since 2014.

But Marketproof’s Goodman noted there are still “hundreds” of projects in construction that will bring several thousand more units into the market in coming years. That’s on top of the city’s current supply of 14,000 unsold condos — about 7,500 of which are in Manhattan alone, according to Marketproof’s data.

“I appreciate the aspirational sentiment of people selling condos, but I don’t think we’re there anytime soon,” said Goodman, who thinks 8,000 to 9,000 units would constitute a “healthy” level. “We’ll see how long the absorption stays at these rates.”