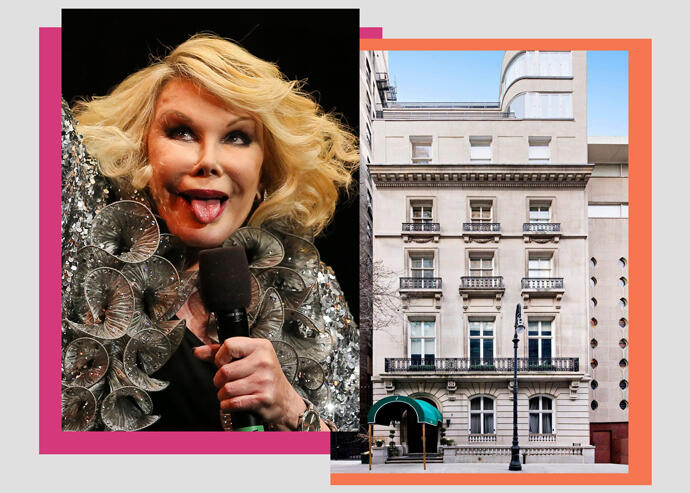 Joan Rivers’ longtime Upper East Side home is back on the market.

The legendary comedian lived in the penthouse at 1 East 62nd Street for 28 years. Following her death in 2014, it sold for $28 million. Now, the buyer, who is reportedly a member of a Middle Eastern royal family, has put it back on the market for $38 million, according to the New York Post.

The 11-room spread has four bedrooms, four and a half baths, a ballroom and two terraces with city views. The 5,100-square-foot apartment is spread out over three floors, and sits atop a mansion that was designed by architect Horace Trumbauer.

When the home sold, there were rumors that the buyer would gut the place. But according to the listing, the opulent interiors — which Rivers once described as “Louis XIV meets Fred and Ginger” — seem to be intact. Decorative touches include parquet-de-Versailles flooring in the reception room, original wood-burning fireplaces and a formal dining room with ornate 18th-century French panels.

In her decades of living there, Rivers hosted parties and celebrities — including Princess Diana — at the penthouse.

She also insisted that the apartment was haunted by a former resident named Mrs. Spencer, and reportedly sought counsel from an expert in voodoo, along with hanging a portrait of the spirit in her lobby to stop the haunting

The property is marketed by Jenny Lenz and Dolly Lenz Real Estate.