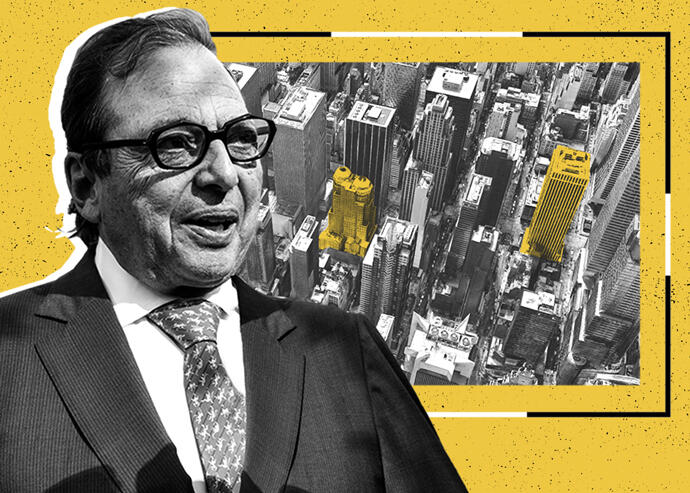 What tenants pay at two Durst towers in Midtown Built in 1989, the 25-story office building at 114 West 47th Street represented a generational shift for the Durst Organization.

The Midtown building is now 60 percent occupied by Bank of America, which has its Private Wealth Management division based there. Three blocks south, the bank is also a major tenant at Durst’s 44-story 1133 Sixth Avenue, completed in 1970.

Bank of America, along with Citi Real Estate and Wells Fargo, last month put together a 10-year, $1.1 billion refinancing for the two office buildings, which have been securitized in a single-borrower commercial mortgage-backed securities deal.

Documents associated with the deal provide an inside look at the properties’ finances.

Bank of America is the largest tenant in the two-building portfolio, with more than half a million square feet. Most of the other big tenants are in the larger, Sixth Avenue property.

The big dog at 1133 Sixth Avenue is law firm Patterson Belknap Webb & Tyler, which is headquartered there. The second largest tenant is Chubb Insurance, which was acquired by Zurich-based ACE Limited in 2016. (After the marriage, ACE took Chubb’s name.)

As of mid-April, physical occupancy at both buildings stood at around 15 percent, as most tenants continued to work remotely. Rent collection at the Sixth Avenue property averaged 95 percent in 2020, and 92 percent at the 47th Avenue property. Steinway received a one-month rent abatement last fall; its space is open by appointment only.

The two newly refinanced buildings were part of an eight-property, 4.8-million-square-foot Midtown office portfolio owned by Durst, which was financed with a $600 million term loan and a $400 million revolving facility. The new financing paid down $800 million in existing debt and returned more than $280 million in equity to Durst.

Another high-profile tenant once eyed space at 1133 Sixth Avenue: Amazon. But the e-commerce giant eventually leased at Vornado Realty Trust’s 7 West 34th Street instead. Last year, a Manhattan judge ruled that Amazon owed Durst more than $21 million for violating a letter of intent. Five months later, Amazon’s appeal of the ruling was rejected.