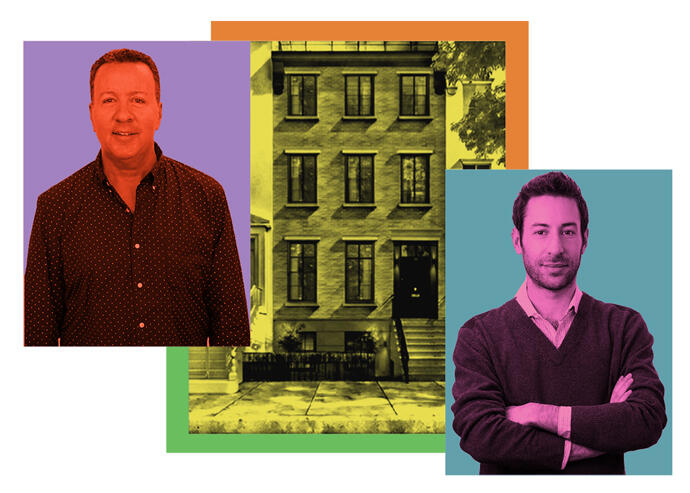 How hot is Manhattan luxury real estate? This hot: A spec townhouse in the West Village has gone into contract, The Real Deal has learned, even though it’s still under construction. The apartment, on West 13th Street, won’t be finished until this summer.

The developers, father and son team Robert and Justin Kaliner of RoundSquare Builders, were seeking as much as $17 million. The final price wasn’t available. Even they, and their brokers, Robert Dankner and Matthew Lesser, were taken by surprise by the strong demand for turn-key Manhattan townhouses, which rarely sell before they are finished.

“I’ve sold one other house in 16 years pre-completion,” said Lesser, a townhouse broker at Leslie J. Garfield. “The condo market is very easily sold off of floor plans. But the townhouse [market] has always lagged behind and really struggled to get that buyer.”

Lindsay Barton Barrett, a broker at Douglas Elliman who was not involved in the deal, agreed. She tried to sell Brooklyn Heights spec house 81 Pierrepont Street while it was in construction and there were no takers.

“It’s much harder to sell when it’s not done,” she explained. “It’s not like you’re buying the same apartment but three floors up. You have to really have confidence in the vision of the person that you’re working with.”

RoundSquare, which is led by the Kaliners, a father-son team, has a track record of developing spec homes in Manhattan. They converted an eight-unit townhouse at 146 Waverly Street that sold for $23.3 million in 2016, more than double the $10.2 million the elder Kaliner paid for it in 2013.

They bought the landmarked 20.5-foot wide home at 137 West 13th Street in 2017 for $6.5 million and hired architect Tom Klaber of KDA Architecture and interior designer Helena Clunies-Ross of Anouska Hempel Design to work on the $5 million gut renovation. Initially, the developers were aiming to sell the home for $20 million, before lowering their target.

“We think we sold it at a good, fair price,” said Robert Kaliner. “We weren’t looking to eek out the last dime.”

The project involved excavating 2,000 square feet below grade, which required underpinning two neighboring buildings. The basement area will include a home gym, sauna, wine cellar, spa and movie theatre, according to Justin Kaliner.

Dankner said the brokers had begun “very lightly marketing” the property this spring and generated interest from a few parties, one of whom visited the project twice and signed a contract to purchase the home within three weeks. All parties declined to discuss the identity of the buyer.

“In the townhouse world, it’s very rare,” said Dankner, who said that the deal “speaks directly” to the demand for the neighborhood, a brand new home and high-quality design.

To Barton Barrett, the deal represents the “mindset of buyers right now.” People want to move into brand new, customized homes quickly, but balk at the idea of handling their own renovation.

“A spec townhouse project, even one that’s not done, is still going to be [ready for move-in] way sooner than buying a townhouse and renovating it,” she explained. “It may be a way to get into a townhouse that is largely customized for you in a few months… instead of three years.”

It’s a strategy she’s planning to use with a spec townhouse she’s handling for the Brooklyn Home Company in Windsor Terrace.

For RoundSquare, the developers are now starting to hunt for their next spec home site. Kaliner said his firm is in contract to purchase another home on West 13th Street and is eyeing two other potential properties, one in Brooklyn and the other in Manhattan.