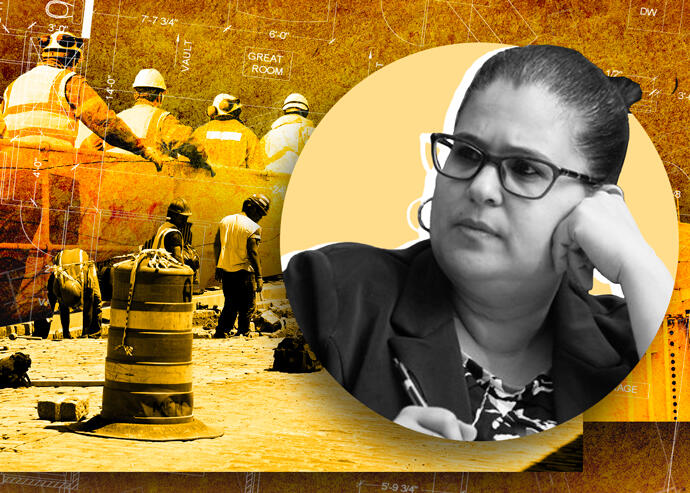 Construction unions may be nearing a victory in their war on “body shops.”

A new City Council bill would impose licensing and disclosure mandates on companies competing with union labor at construction sites.

The bill, expected to be introduced by Council member Diana Ayala on Thursday, would require labor brokers to obtain a license from the city and report their workers’ demographics, wages and benefits twice a year.

The measure has been sought by the construction laborers union, Local 79, which wants the city to crack down on nonunion companies that supply low-wage laborers to general contractors. The union accuses them of exploiting women and the formerly incarcerated in particular.

“Construction body shops provide developers with a cheap labor pool, made up of black and brown justice-affected nonunion workers,” Ayala said in a statement. “Body shops take advantage of the scarcity of employment opportunities for re-entry workers, and effectively force these workers into dangerous jobs, with no training, for low pay. They prey on the fears of resentencing.”

But the nonunion firms say their jobs are a lifeline to people leaving prison, providing them with pay and skills that help them get back on their feet. Union construction jobs are much harder to get, they say, and involve navigating a system that is confusing and arcane for many New Yorkers.

Under the proposed legislation, companies applying for a license must provide proof of insurance, disclose their ownership structure and certify that they comply with the law. The city can deny a license if the company — or an affiliated predecessor — has outstanding legal penalties or if the Department of Consumer Affairs and Worker Protection deems that it “lacks good moral character.”

Companies that operate without the license would face $200-a-day fines. General contractors, subcontractors and licensed employment agencies/organizations would be exempt. A separate City Council bill is seeking to require general contractors to obtain a license.

Over the past decade, unions have lost ground to nonunion general labor firms, especially in the affordable housing market. Local 79, however, has negotiated with developers, agreeing to wage concessions to win work.

Last month the City Council’s Committee on Consumer Affairs, which is chaired by Ayala, held a hearing on employment agencies and other labor-placing businesses. The meeting largely focused on body shops, as the union calls them.

At the time, the Real Estate Board of New York proposed alternatives to address allegations of exploitation, including increasing funding to the Department of Consumer Affairs “to better protect justice-involved and other vulnerable workers from wage theft and other unsafe or illegal practices.” The organization also pitched requiring that workers on publicly funded construction jobs be paid more than minimum wage, plus benefits.

Such a measure, according to the group, could include local hiring and reporting requirements to increase transparency. The group also urged the City Council to find ways to “grow the construction industry as an avenue for a more just and equitable workforce” and partner with nonprofits that work with both union and nonunion workers.

“REBNY recognizes that private-sector union construction is essential to the development of New York City, and our members account for most of the union construction contracts,” the organization stated in written testimony. “However, it is not practicable to contract union work for the entirety of all jobs.”

During the hearing, Local 79 members recounted their experiences working for companies they identified as “body shops.” Workers described low pay and poor working conditions — and bosses who took advantage of the fact that losing the job could mean reincarceration.

“While we are coming out of a pandemic, there is a pandemic of exploitation that is happening in the industry,” said Mike Hellstrom, president of the Mason Tenders’ District Council. “These labor service providers are profiteering off the back of labor.”