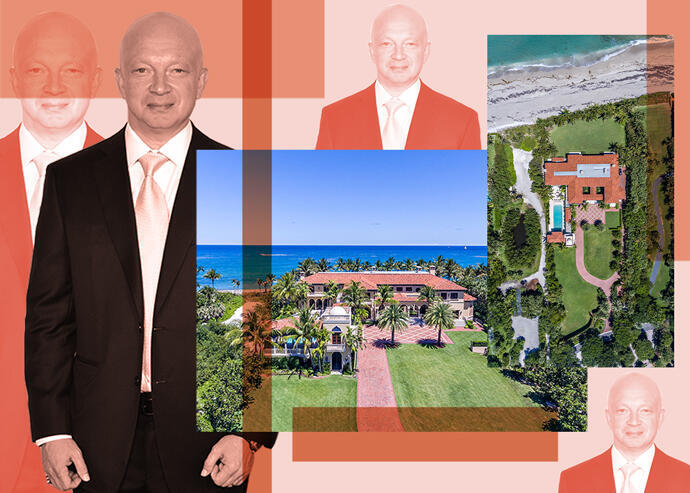 “We flew down for a few hours, saw it, picked it,” said Ryan Serhant of Serhant, who represented the hedge fund manager in his purchase of 12088 Banyan Road in North Palm Beach. Ohio real estate scion and casino developer Jeffrey Jacobs sold the 18,852-square-foot, nine-bedroom mansion, according to property records.

Tulchinsky, chairman and CEO of Greenwich, Connecticut-based WorldQuant, also plans to open offices throughout Florida, Serhant said. He represented the buyer along with Chris Leavitt of Douglas Elliman.

Elliman’s Elizabeth Zahra and Gary Pohrer had the listing for the North Palm Beach mansion, which hit the market in 2019 for $42 million.

Jacobs, chairman and CEO of Jacobs Entertainment, a developer of gambling and entertainment properties, bought the property in 2001, and knocked down two smaller homes to build his mansion. He completed it in 2008, records show.

The nearly 3-acre estate has a safe room, which doubles as a hidden art gallery and movie theater; a telescope on the roof; a pool and 190 feet of ocean frontage.

Jacobs’ family owned the Cleveland Indians from 1986 until the early 2000s. They also previously owned the Pier House Resort & Spa in Key West.

In April, Tulchinsky paid $33 million for a unit at 220 Central Park South in Manhattan.

Nearby in North Palm Beach, billionaire Oracle Corporation co-founder Larry Ellison plans to demolish the mansion at 12525 Seminole Beach Road that he acquired in April for $80 million.