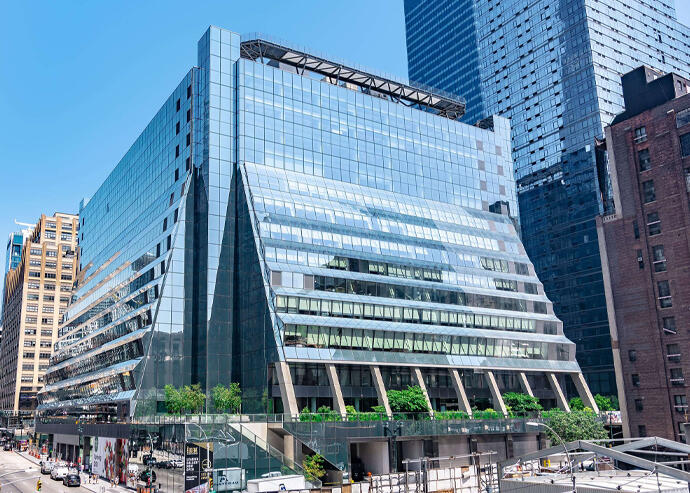 Apparel sales are surging. Subway ridership is at a 15-month high. Lines of customers are forming at Midtown salad shops during the lunch rush. For better or worse, New York City’s office workers are slowly returning to workplaces long abandoned.

The city’s office market, battered during the pandemic, is similarly showing signs of a rebound, with companies yanking their spaces off the sublease market in anticipation of an earlier than expected return to the workplace.

Rent the Runway, which rents out designer dresses and accessories to subscribers, recently pulled its 83,000-square-foot Dumbo office from the sublease market, where it had sat since September.

“The decision was made, as their business has picked up, to go back and reoccupy the space,” said Ira Schuman, a Savills broker who handled the sublease listing, adding that Rent the Runway is one of dozens of companies that have recently decided to reoccupy space.

More than 15 million square feet of sublet inventory has been dumped on Manhattan’s office market since the beginning of the pandemic, according to JLL, as stricken businesses aimed to cut overhead costs.

Even companies that were not financially devastated by the health crisis — such as JPMorgan Chase, which placed 700,000 square feet of Lower Manhattan office space on the sublease market in March — jumped on the bandwagon, hoping to save some money by backfilling extra office space that they may not need.

But the surge of sublease additions slowed in the first quarter of 2021 as more Americans got vaccinated and infection levels tumbled.

“The combination of the optimism around the vaccine and what I call the parting of the clouds a little bit sooner” has made some firms realize they may actually need space they had previously considered forgoing, said JLL Vice Chair Cynthia Wasserberger.

A new report Wasserberger authored lists a sample of 16 such tenants across different industries — including Compass, First Republic Bank and the ad agency WPP — that have recently delisted a total of 590,000 square feet of space placed on the market since the start of the pandemic.

Last summer, educational publisher McGraw Hill listed its 130,000-square-foot space at Paramount Group’s 1325 Sixth Avenue for subleasing to “evaluate our physical footprint,” the company said in January. But the firm recently withdrew a 100,000-square-foot portion of the listing, as it’s now considering plans to welcome its employees back this year. Zillow Group, SalesForce and Buzzfeed have recently made similar moves, according to a report by Savills.

On average, sublets are offered for about 25 percent less than direct leases, and average sublet asking rents decreased a further 4.9 percent in the first quarter compared to a year ago, according to Danny Mangru, Savills’ research director for New York and the Tri-State region.

Savvy tenants have taken advantage of the discount by grabbing some of the better spaces available. Noom, a weight-loss app developer, inked a 113,000-square-foot sublease to take over most of ad agency R/GA’s space at Brookfield Property Partners’ 5 Manhattan West.

Some companies may be withdrawing their sublease listings after realizing that they’re not going to save as much money as they once hoped in a market flooded with competition, said Michael Colacino, president of the online commercial brokerage SquareFoot.

“As people find that the price that they want is not being met, their expectations get revised,” Colacino said. If office tenants wanted to sublet their space but find no takers unless they give a deep discount, he said, they may conclude that “it’s really better to just hang on to it.”