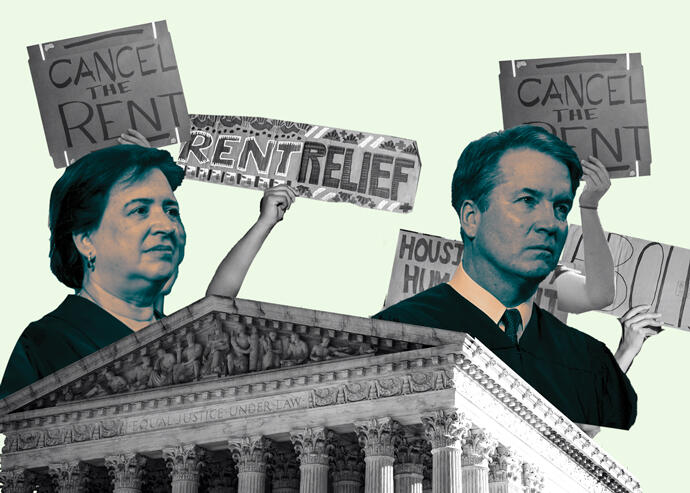 The CDC-imposed federal eviction moratorium will live on — at least for another month.

In a 5-to-4 ruling late Tuesday, the Supreme Court rejected an emergency request to vacate the ban, which President Joe Biden extended last week for a fourth and likely final time. It is set to expire July 31.

Opponents of the ban, including the Alabama Association of Realtors, among other groups, had challenged the CDC’s statutory authority to prevent landlords from evicting non-paying tenants. A federal judge agreed on May 5, ruling that the CDC had exceeded its mandate, but issued a stay on her own ruling to allow the government time to appeal.

Other challenges from landlords met with mixed success in federal court, but even judges who ruled in their favor neglected to allow evictions while the government appealed. Although property owners’ argument found traction in the courts, ultimately they ran out of time.

The court did not issue a detailed explanation of its decision, but Kavanaugh struck a pragmatic tone in a brief concurring opinion.

“I agree with the District Court and the applicants that the Centers for Disease Control and Prevention exceeded its existing statutory authority by issuing a nationwide eviction moratorium,” he wrote. “Because the CDC plans to end the moratorium in only a few weeks, on July 31, and because those few weeks will allow for additional and more orderly distribution of the congressionally appropriated rental assistance funds, I vote at this time to deny the application to vacate the District Court’s stay of its order.”

Landlords, developers and other real estate interests have urged lawmakers and President Biden to allow the ban to expire and instead focus on targeted rent relief for at-risk tenants to avoid a wave of evictions.

In the absence of the CDC’s federal moratorium, landlords in several states, including California, could immediately have the freedom to initiate eviction proceedings. Others, such as New York, have extended eviction protections through the end of August.

In general, rent collection has been stronger than expected during the pandemic, despite the federal and various statewide eviction moratoriums. In May, 94.6 percent of renters made payments, down just 2 percentage points from the same month two years earlier.

But some tenants, knowing they cannot be evicted, have not paid rent for months and have fallen so far in arrears that landlords see eviction as their only option.