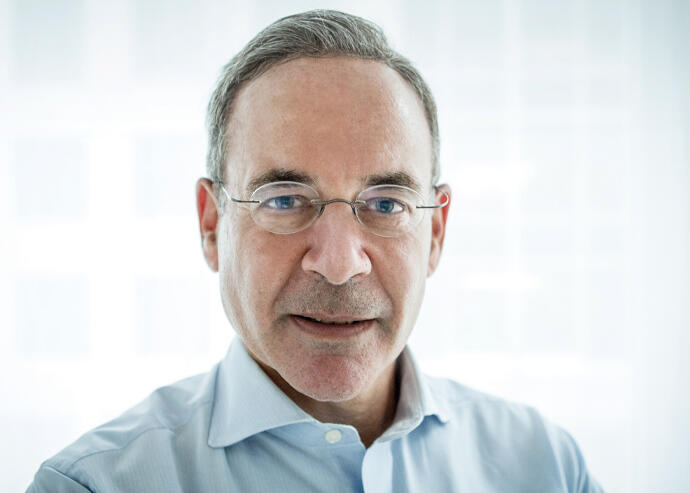 Ron Dickerman has made quite a career out of coming in second.

As the founder of Madison International Realty, which over the past two decades has pumped north of $17 billion into real estate assets, Dickerman is one of the industry’s biggest secondary investors, focused on owning minority positions in big-ticket properties. His company’s name isn’t generally in the headline of a press release, but it’s in a lot of them.

Madison owns or has owned pieces of the Seagram Building on Park Avenue, the Lloyd’s building in London and the Trianon tower in Frankfurt, Germany. Dickerman developed a niche of serving as a port of call for real estate syndicators who needed to cash out on their stakes in buildings before their partners were ready to sell. He founded the company in 2002 in New York and now has overseas offices in Frankfurt, London, Luxembourg and Amsterdam.

In New York, Dickerman became one of the largest owners of retail real estate in 2017, when Madison bought Forest City Realty Trust’s 51-percent stake in a 2.1 million-square-foot property portfolio that includes Brooklyn’s Atlantic Terminal Mall, the Atlantic Center and a package of properties on 42nd Street near Times Square that houses the Madame Tussauds wax museum and AMC Theaters.

The deal gave Madison full control of a portfolio in which it had owned a 49 percent stake since 2011. The firm is now eyeing potential redevelopment opportunities on a portfolio of Saks Fifth Avenue and Lord & Taylor stores the company owns alongside retail giant Hudson’s Bay Company.

One late September afternoon, Dickerman spoke with The Real Deal at the company’s new office at the Colgate-Palmolive building at 300 Park Avenue, a building it once co-owned with Tishman Speyer from 2008 to 2014. He discussed breaking into the secondary business, the turmoil in the office market brought on by remote work and being part of a blended family.

What does it mean to be a secondary investor?

Our business isn’t going out and bidding on a building and buying it in the marketplace the way Starwood or Blackstone might. [It’s] being a liquidity provider to existing investors that want an exit strategy, where they want to sell their interest or ownership stake in the building before the natural sale, or where an owner or sponsor wants to take on a friendly partner and sell down a piece.

It seems like they may be motivated sellers at that point. Does that give you leverage?

Maybe. I would say the other thing that’s helpful whether we have leverage or not is that it is a very underexposed niche of the commercial real estate business. It tends to be very topical when there’s volatility and it’s viewed as a clever backdoor entry point. What creates volatility in the market?

The Chinese bought the Waldorf Astoria [from Blackstone, for $1.95 billion in 2015]. So you’ve got something going on in Beijing that impacts 50th Street and Madison and Park Avenue. Donald Trump gets elected president, and he tightens down the immigration laws. If you’re from the Middle East and you’re in real estate in the U.S. and you can’t come to this country, how can you continue to own that asset when you don’t have the ability to come in to see it or to enjoy it?

Looking at Evergrande, will things get worse in China and become a systemic problem?

The government has to decide what their posture is. Is it civil liberties and quality of life for their people, or is it the perpetuation of their form of government and central control to the sacrifice of the former?

How did Madison get started?

I was originating real estate limited partnerships [at investment bank Smith Barney] and closed-end funds, buying real estate, putting it into a partnership and then selling the limited partnership interest through the Smith Barney retail brokerage network. What happened was the first Persian Gulf War — the George Herbert Walker Bush war — and the savings and loan crisis. It was a huge moment of distress in the commercial real estate markets. I left Smith Barney at the time, and I kept scratching my head thinking, “What would be an interesting opportunity to become an entrepreneur in real estate?”

[We started] buying out partners in German syndications that were sold by German commercial banks in U.S. real estate. This building, 300 Park Avenue, was a German syndication; 666 Third Avenue, the Chrysler East building; 31 West 52nd Street, which was the original E.F. Hutton headquarters; and 666 Fifth Avenue — all of those were owned by German closed-end funds for syndications.

Did the business change when you bought Forest City’s retail?

That was a change in the business strategy, but it happened for a reason. Barclays Center was a hole in the ground, and it was about a $1 billion development check at the time. Forest City’s CEO said, “What we’re going to do is go out into the marketplace and sell down a 49 percent interest.” That was our aha moment, and we said, “That could be a transaction for us.” We shook hands and ended up writing them a $200 million equity check.

Five years went by, and Forest City’s stock was sluggish. So they called us and said, “We’re getting out of the retail business.” It took us about 30 seconds to turn the conversation around. So we wrote them another $300 million check, and we bought the entire portfolio outright. It was a little bit of a twist, but we had the opportunity and we took it.

The mall seems like it’s sort of stuck in the early 2000s.

We’ve got unbelievable frontage on Atlantic Avenue directly across from Barclays Center. And yet, because the leases are so long, it limits our flexibility in terms of leasing these assets up and making them interesting and exciting. So what we’ve been doing is trying to move the tenancy into the current century. Some investors are trophy hunters. A guy like Aby Rosen likes to tell people he owns the Chrysler Building or the Seagram Building. Is investing for you all about IRRs and cap rates, or is there some of that glamour about it?

Well, it is about economics and returns first and foremost, but I love the real estate business. I think there is some pride of ownership and some excitement that goes into the architecture and the curb appeal. I would say the bigger issue for us, which is a realization we had years ago, is that real estate is not really about sticks and bricks. It’s about people. And there are some colorful people in this industry.

What’s your view on remote and hybrid work and its impact on the office market?

We moved to this office space four months ago, and we doubled our office footprint and committed for 10 years. It’s a little bit of a commentary on our view on the office and a bet on ourselves.

But plenty of companies have said that they’re going to switch to a hybrid model. That’s hard to ignore.

I don’t dispute it or refute in any way, especially when you look at, say, a computer programmer policing a chat room on Facebook. There’s no reason why you have to be sitting in an office to do that. And there’s probably 20 other functions that I can think of where he doesn’t need to be in the office. I just have the view that it just isn’t the same when you’re not together.

Talk about some of your multifamily bets.

What we’ve been doing is investing in the Sunbelt. We’ve also been playing a little Covid distress recovery. We’ve been focusing on Class A multifamily properties in demographically compelling markets where they’re coming out of construction and maybe the lease-up period is going a little bit longer and the underlying developers need equity.

You were really big on buying the dip when real estate stocks tanked at the start of the pandemic. Have you sold most of those positions now that things have bounced back?

We were very aggressive buying the dip in the teeth of Covid. That’s worked out extremely well for us. And our view is Covid is still a thing and the stocks haven’t fully recovered. So in some cases we’ve trimmed down our positions. In other cases, we still own the stock.

Are there any markets or asset classes that you just won’t touch right now?

We’re not investing in Class B office. That’s office buildings that look like the one across the street and the one next door — we think it’s purely a commodity. You’ve lost all your pricing power with tenants. The business of buying office buildings and waiting for the rents to rise — that’s yesterday’s business.

Where’d you grow up?

Near Boston, in a small town called Lexington. My dad was in the real estate business and I grew up going to the apartment buildings on the weekends, vacuuming the hallways and cleaning the swimming pool. That was the extent of my indoctrination.

How’d you meet your wife?

We met about 15 years ago. Traveled in the same circles and our kids were in school together and we both became single at about the same time, and the rest, as they say, is history. We have four kids, she has two, I have two, we’re a blended family. They’re all our kids, we adore them.

Is there one goal you’ve set for the next 20 years? A brass ring you want to reach for?

I think you can count on two hands the number of real estate private equity firms that have raised funds with double-digit Roman numerals. And I have every expectation that we’ll be firmly in that camp.

Correction: A previous version of this story said that Madison International Realty co-owns 300 Park Avenue. The company previously had a stake in the property from 2008 to 2014.