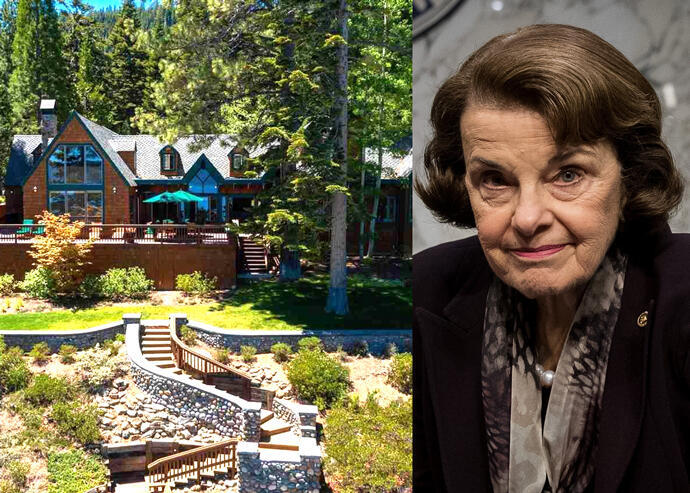 Dianne Feinstein, California’s senior senator, is trying to hammer out a deal for her Lake Tahoe compound.

Feinstein and her husband Richard Blum — head of Blum Capital — are asking $41 million for the nearly 5-acre compound, according to the New York Post. The property at 9115 State Highway 89 was on the market briefly last fall asking $46 million.
It’s a good time to be selling in Lake Tahoe, where the market has seen strong demand since the start of the pandemic.

Median sales price is just under $900,000, up nearly 30 percent year over year, according to Redfin. Demand among urbanites fleeing cities has contributed to that growth.

Feinstein and Blum’s compound spans three parcels on Lake Tahoe’s western shore with a main house and two guest houses, with over 10,000 square feet. Altogether the three homes have 11 bedrooms and nine bathrooms.

The property has 278 feet of frontage on the famously crystal-clear lake, a 172-foot pier, and a boat lift.

The main house was built in 1997 in a rustic lodge style with stained wood throughout the interiors, two fireplaces, a game room, and two-car garage. A wide back deck overlooks the lake.

A staircase leads down to a 2015-built guest house called the “Rubicon Pavilion” with floor-to-ceiling glass windows, a stone patio and a firepit. The other guest house is called the “Carriage House” and has four bedrooms.