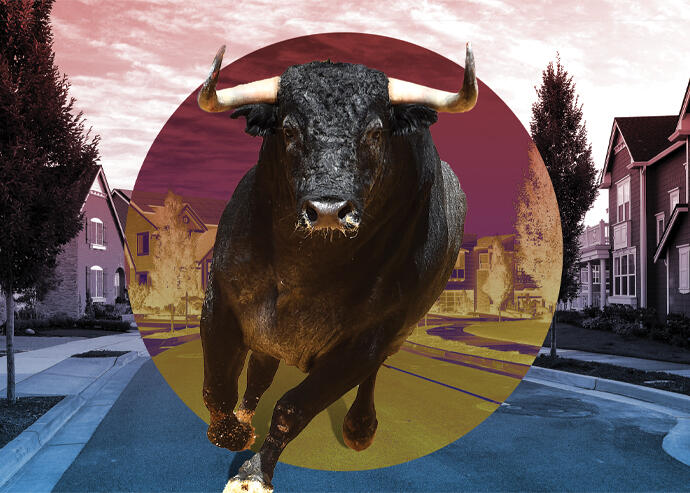 When Doug Brien looks at opportunities in the single-family rental business, he sees a pair of goal posts a mile wide.

Brien, a retired NFL placekicker, is aiming to become the biggest single-family landlord in the country, and he isn’t accustomed to missing. He completed 80.2 percent of his field goal kicks during 12 seasons in the NFL and won a Super Bowl with the San Francisco 49ers. Now, with backing from Invesco, he says he’s planning to spend as much as $5 billion buying 1,000 homes per month in the next 18 months.

“In the pandemic, single-family rentals just crushed other asset classes,’’ said Brien, who formerly led Waypoint Homes and is now CEO of Mynd Management. “We are seeing unprecedented institutional demand.”

Brien co-founded Waypoint Homes in 2009. It grew to 600 employees, with about $3.5 billion in assets under management and 17,000 rental homes, and eventually merged with Blackstone’s Invitation Homes. Brien co-founded Mynd in 2016.

Big money is pouring into single-family rentals as investors like Brien and bigger players like Blackstone, which helped turn family homes into a new asset class more than a decade ago, bet billions that lightning will strike twice.

Last time, after the subprime mortgage crash and millions of foreclosures, the formula was straightforward: Buy up houses cheaply in short sales or at county courthouse auctions; create management companies to centralize rental, maintenance and other services to achieve economies of scale; create financing vehicles to leverage further growth; rinse and repeat.

Blackstone created Invitation Homes, which owned close to 48,000 homes when it went public in 2017 in a $1.5 billion offering. The company had made $7 billion in profits, according to the Wall Street Journal, by the time the private equity firm exited its position in 2019. At the peak, Blackstone was spending $100 million a week buying homes.

This time around, the economics may be more challenging. So far there has been no flood of foreclosures as there was in the Great Recession. On the contrary, home prices are soaring, raising the entry cost for potential single-family rental landlords. In April, home prices shot up 14.6 percent from a year earlier, according to the S&P CoreLogic Case-Shiller U.S National Home Price Index, the biggest gain since the index began over 30 years ago.

Those realities have done little to slow the flood of money pouring into single-family rentals. The higher cost of homes is partially offset by record low interest rates and plentiful financing options, while soaring home prices are helping to push potential buyers into the rental market, driving demand and allowing SFR companies to raise rents.

“Institutional investors are professionals, but they make mistakes, too,’’ said Robert Shiller, Yale economist and Nobel laureate. “And I would worry a little bit about buying in as an investor at this point in history when home prices have gone up a lot. But they aren’t just buying any houses, they’re buying certain houses, and they may be right; I just don’t know.”

Origins of an asset class

The idea is that Americans like living in houses — they just don’t like the things tied to being a homeowner such as fixing leaky water pipes or broken fences.

Firms like Invitation Homes and Colony Capital bought these homes mostly in suburban communities in large metro areas such as Phoenix, Las Vegas and Atlanta, then managed them and collected rent checks from tenants.

“It was odd that 15 years ago, no one thought this was something large-scale investors could get into,” said Edward Coulson, director of the Center for Real Estate at University of California, Irvine. “It was a mom-and-pop business. If you rented a single-family house, your landlord was probably someone down the street, and now that’s not true anymore.”

Some also worried that the emergence of the corporate-owned single-family rental industry would fundamentally alter the American dream of homeownership.

“This is something that’s on our radar as academic real estate economists,” Coulson said. “It’s difficult for me right now — especially without any hard data — to imagine a situation where a single owner would have a monopoly position in housing.”

Though SFR is still a small part of the market nationwide, there are some smaller communities where a single firm controls a majority of the rental stock.

When Danielle Hall, 35, was searching for a bigger single-family home to rent in Trenton, Ohio (population 13,000), in 2017, she soon realized that most of her options were owned by American Homes 4 Rent.

“There wasn’t really much of an option as far as going through anyone but them,” Hall said. The company had started setting up single-family rentals in the area in 2013 and now has 73 homes in the city, according to a spokesperson.

But 2020 saw an unexpected trigger: Covid. City dwellers quarantined in small apartments started looking for places in the suburbs, while many who lost jobs were unable to keep up with mortgages. The Federal Reserve cut interest rates, while Wall Street had already provided other financing options, including rent-backed securities.

“We have gone from zero to 100 in a year. If Covid didn’t happen, I don’t know where we would be,” said Mark Wolf, founder of San Antonio, Texas-based AHV Communities, a single -family rental operator.

But the pandemic also put the brakes on mass foreclosures: Borrowers with government-backed mortgages were able to enter the forbearance program, which allows them to miss payments for as long as 18 months, though they will have to be caught up later. At the peak in June 2020, there were 4.3 million homeowners in forbearance. Now there are 2.2 million, according to Black Knight.

Some of those will result in foreclosures or distressed sales, though it’s not clear how many or when that process will begin to accelerate.

Blackstone recently agreed to pay $6 billion for the operator Home Partners of America, while homebuilder Lennar has a $4 billion initiative to buy existing homes and turn them into rentals. Blackstone also led a group of investors in a $300 million investment in a single-family residential company, Tricon Residential, in August.

Tricon Residential CEO Gary Berman said the company can do it all. It builds single-family rental communities, buys existing homes through the Multiple Listing Service and buys homes directly from homebuilders. Berman said the company was buying 800 homes a quarter one at a time off the MLS, but is planning to increase that to 1,500 homes per quarter later this year.

“The market is incredibly tight; the only difference is we have more capital to put out,” said Berman.

Tricon recently inked a $1.5 billion joint venture with Pacific Life Insurance Company to invest in 5,000 new homes across the Sunbelt.

“Every big Sunbelt market, we are buying in,” said Berman.

Pretium and Ares Management Corporation have acquired Front Yard Residential Corporation and its 14,500 rental homes for $2.5 billion. And the private equity giant KKR & Company has announced a plan to launch its own single-family rental division.

Meanwhile, Washington, D.C.-based Fundrise recently secured a $300 million credit facility from Goldman Sachs to finance new home construction in the Sunbelt. Co-founded by brothers Ben and Dan Miller, the firm engaged in a heated bidding war to acquire a single-family rental community from homebuilder D.R. Horton for $32 million in Conroe, Texas, about 40 miles north of Houston.

“We can focus on being long-term partners for the homebuilders,” said Ben Miller. “Most private equity guys, it’s IRR [internal rate of return]-driven — they are in and out. It’s not a great partner for a homebuilder.”

While multifamily properties have also held up well, the cap rate — a measure of an asset’s expected rate of return — for smaller multifamily properties in metro areas averaged 5.3 percent in the first quarter, according to a research report from the lender Arbor Realty Trust. Single-family rental homes had cap rates of 6 percent during the same period.

At the same time, financing has become much cheaper, said Jade Rahmani, an analyst at Keefe, Bruyette & Woods. Many of the investors financed their acquisitions through warehouse lines with banks, and financing became cheaper when the Fed lowered interest rates because of the pandemic.

A key risk factor for the business is the possibility that interest rates will rise as a response to higher inflation. That risk currently seems small, said Shiller.

“The Fed at this point is predicting no increases this year and maybe in 2022,” Shiller said. “So people think there’s something going on that they can get in on now, apparently, and it’s helping to fuel the boom, but the atmosphere could change if the Fed does substantially increase interest rates.”

“It’s getting really crowded and really fast. I am being more careful with it now that I am seeing money pour in,” said Mark Fogel, the CEO of private lender ACRES Capital, which has provided construction loans for single-family rental properties throughout the country.

Another concern is not just that these companies could be overpaying but that the demand will drop, especially for SFR communities that are too far from city centers.

“Location is a fundamental tenet in real estate, and we are seeing deals being done about 30 to 40 minutes to an hour outside of these job centers. That worries me,’’ said Wolf of AHV Communities.

While the rise in investment for single-family homes might be good for Wall Street, what it means for tenants is a subject of some debate.

While institutional owners argue that their platforms are more consumer-friendly, offering 24/7 apps and phone lines in case someone needs a repair, some tenants say that off-site management is sometimes not as reliable as dealing with an individual landlord.

Hall settled on a bi-level house with a big backyard in a Trenton neighborhood that was brand new when she was a kid, giving it a slightly sentimental feel. It was harder to deal with maintenance issues with the company compared to her previous landlord, who was a family friend, she said. After four years at the home, she plans to move out in August.

American Homes 4 Rent lets residents contact it 24/7 with maintenance requests and services, a spokesperson for the company said in a statement. While it was not responding specifically to Hall’s case, it said this was true for all residents.

A 2016 report from the Federal Reserve Bank of Atlanta found that in Fulton County, Georgia, single-family rentals owned by large corporate entities are 8 percent more likely to have housing instability. And while some firms backed by institutional landlords have average eviction rates,  some large firms are 18 to 19 percent more likely to file eviction notices than small firms, according to the report.

To industry proponents, the growth of the sector hinges on American’s changing perception of homeownership. While it has declined in recent years, national homeownership  remained at 65.6 percent in the first quarter of 2021, much higher than in many other countries.

“We are seeing a cultural shift from owning to renting all kinds of things, wedding dresses, clothes, power tools, cars,” said Brien. “Why should houses be any different?”