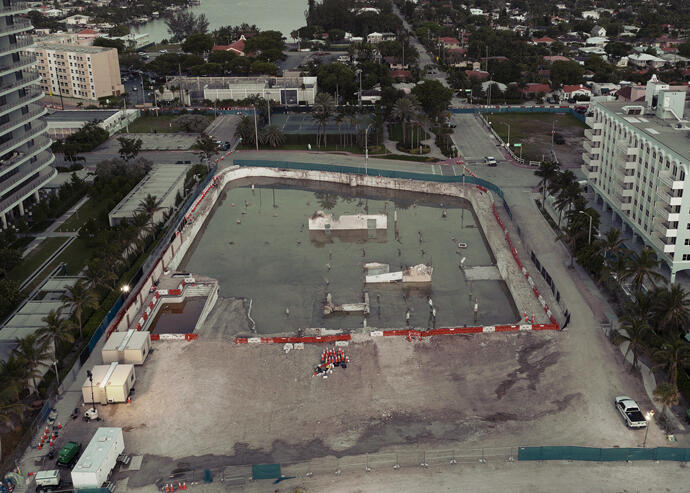 The lot where the Champlain Towers South once was (Getty)

Weeks after the Champlain Towers South came down, officials are now concerned part of the pool deck could collapse, creating further instability at the Collins Avenue site.

This weekend, workers will be installing beams to support the area that is “in danger of collapsing,” attorney Michael Goldberg, the court-appointed receiver for the Champlain Towers South condo association, said during a hearing on Friday. The pool patio deck is on the southeast corner of the site at 8777 Collins Avenue.

In July, more than two weeks after the northeast portion of Champlain South collapsed overnight, trapping and killing nearly 100 people, Miami-Dade brought down the rest of the oceanfront condo building in a controlled demolition.

Collins Avenue in that area has been closed since the collapse on June 24, and was previously slated to reopen. But the engineer hired by Surfside to oversee the investigation warned that the street is also at risk of collapsing, delaying the reopening. The adjacent condo building, Eighty Seven Park, is also still closed.

At the hearing before Judge Michael Hanzman, Goldberg called the state of the pool deck an “immediate life safety issue.”

Hanzman was also expected to allow Goldberg to sign off on a roughly $500,000 permit to allow Miami-Dade to hire Bofam Construction Company to brace the retainment walls at the property.

But that permit had a timeline of up to six months, which the county considered “unacceptable,” Hanzman said. The county brought in an additional engineering firm that is revising the drawings and design of the buttressing, and those new plans will be ready next week. Once they are completed, a new emergency hearing will be held so Goldberg can sign off on the permit.

Brokerage Avison Young is working on an offering memorandum for the site. Hanzman, who is presiding over the more than a dozen lawsuits that have been filed, has said the fair market sale of the property will be needed to supplement the roughly $48 million in insurance payouts to victims and their families. An appraiser is also working on determining the fair market value of the Surfside condos, which no longer exist.