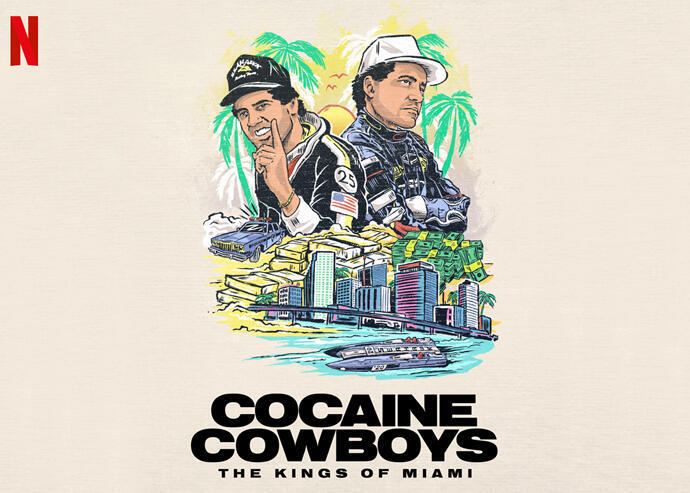 These Miami properties play cameo roles in “Cocaine Cowboys: The Kings of Miami” Cocaine, money and real estate. This was the holy trinity that Miami high-rollers worshipped from the late 1970s to the early 1990s. And the popes were a pair of Miami Senior High School dropouts named Augusto Guillermo Falcon and Salvador Magluta, who were simply known as Willy and Sal or los muchachos (the boys).

The nexus between drug trafficking, money laundering and real estate is one of the overarching themes in “Cocaine Cowboys: The Kings of Miami,” the recently released six-part documentary Netflix series from director Billy Corben that retells the rise and fall of Falcon and Magluta.

Falcon and Magluta ruled over a vast $2.1 billion drug trafficking empire that moved 75 tons of cocaine into the United States from 1978 to 1991, according to the federal government. While chasing Falcon and Magluta, the feds seized more than $16 million in real estate.

Some of those properties make cameo appearances in the docuseries about Falcon and Magluta, who used family members as fronts for their real estate transactions. In the series, Falcon and Magluta underling Pedro “Pegy” Rosello recalled Sal owned a penthouse apartment on Brickell Key. Their nickname for the unit paid homage to the popular 1983 movie starring Al Pacino about a fictional Cuban-born cocaine baron. “We used to call it Scarface,” Rosello said. “So we would go out and party and Sal gave us an extra key. After clubbing, we would go and hang out at Scarface.”

According to court documents and old press clips, the feds seized two penthouses at Brickell Key One, at 520 Brickell Key Drive. Finished in 1982, it was the first residential building completed by Swire Properties on the man-made island.

The other condo, a 3,000-square-foot unit with three bedrooms and four bathrooms, had been valued at $455,000. The penthouse was bought at auction for $163,000 in 1999 by Thomas Axon, board chairman of national mortgage servicing company Franklin Credit Management Corp., who later transferred ownership to his ex-wife. The Mutiny Hotel, a Coconut Grove institution, included an infamous members-only club where music icons like Rick James and George Michael and other celebrities rubbed elbows with Miami’s top coke dealers. Dubbed the Studio 54 of Miami, The Mutiny was a 12-story ode to decadence developed and owned by Burton Goldberg, who was known as the city’s “Hugh Hefner” at the time.

In “Kings of Miami,” Ralph “Cabeza” Linero, who served eight years in prison for his role handling shipments for Falcon and Magluta, described The Mutiny as “the Wall Street of the cocaine business in the ‘80s.”

When los muchachos and their crew wanted to let other drug dealers partying at the club know they had cocaine to sell, they would place a cardboard kids’ crown from Burger King on the table, Linero recounted. “That was a sign to everybody in the club that, ‘hey we have material, let’s talk,’” he said in the docuseries.

As the Cocaine Cowboys era waned, so did The Mutiny’s cache. Goldberg sold the property at 2951 South Bayshore Drive for $17 million in 1984 and six years later moved to California where he transformed into an alternative medicine guru.

The Mutiny’s new owners faltered and lost the storied property to foreclosure in 1986. A decade later, Miami developer Ricardo Dunin bought the hotel in 1996 and converted it to a hotel-condo that is now owned by individual investors and operator Provident Hotels and Resorts. On Oct. 17, 1991, local, state and federal law enforcement agents raided a white two-story house on La Gorce Island in Miami Beach where they apprehended Magluta and several of his cohorts. The same day, Falcon was picked up in a Fort Lauderdale mansion he was holed up. The crime bosses had been on the lam following a federal indictment charging them and members of their organization with cocaine trafficking.

In episode two of the Netflix series, Rosello reveals that he flipped on Magluta and provided investigators with his location, the waterfront property at 98 East La Gorce Circle.

“It was either cooperate or spend the rest of my life in prison,” Rosello said. “So, I gave them Sal. I drew like a map. That is how they found La Gorce.”

Inside the five-bedroom home, which Magluta was renting for $5,000 a month, agents found his wallet along with fake passports and fake driver’s licenses bearing Magluta’s picture, but only a small bag of cocaine. One of the men arrested with Magluta gave investigators Falcon’s location, according to press reports.

At the time, the property was owned by a couple named Isaac and Maria Benmurgui, who paid $240,000 for the home in 1978. It has changed hands four times since then, most recently in 2019 to a company managed by luxury home builder Philippe Harari. In 1987, Rosello was a high-flying lieutenant in the Falcon and Magluta empire who rode around in exotic cars and rented condos in luxury buildings. “Kings of Miami” explores Rosello’s courtship of Alexia Echevarria of “The Real Housewives of Miami” fame. He takes her to his apartment, a unit on the fifth floor of Champlain Towers South, the beachfront condo tower in Surfside, according to Cocaine Cowboys director Billy Corben.

The property is now known around the world as the condo building that partially collapsed in late June, killing 98 people. In 1988, the federal government initiated civil forfeiture proceedings to seize the 2-acre ranch with a five-bedroom house and accompanying stable at 12000 Southwest 49th Street. Investigators claimed Falcon and Magluta used the property as a communications base to coordinate their cocaine runs by plane and boat, according to press reports. Magluta’s wife Isabel and sister-in-law Arlene Solis bought the ranch for $190,000 in 1980, records show. Five years later, an entity managed by Magluta’s parents paid $233,000 for it.

During a 1989 deposition, Isabel Magluta affirmed her name, her address and that Sal was her husband, but she then pleaded the right against self-incrimination 59 times. A federal judge approved the seizure and the ranch was sold at auction for $300,000. The government pocketed $192,000 after paying off the mortgage. Falcon and Magluta weren’t just prolific shadow buyers of Miami real estate. They were developers too, according to the feds. Assistant U.S. Attorney Christopher Clark, who was on the team that prosecuted Falcon and Magluta, said they used their fathers to act as presidents of construction companies that developed apartment buildings in the Miami area.

According to the U.S. government, the properties were each worth $3 million and had been built with illicit drug proceeds. Court documents show that the government installed its own property management firm to operate the buildings shortly after seizing them. But despite collecting rents, the government allegedly refused to make any mortgage payments. The lender, Citibank, and Ridgewood Development, which owned the buildings, filed motions to compel the government to pay all rents, profits and revenues toward the outstanding mortgages.

In 1993, Citibank bought the apartment complex at auction and 10 years later the properties were sold to Hialeah developers Marty Capparos Jr. and Maurice Cayon, who converted the units into condominiums. Another crash pad Magluta owned in the Brickell area was an 11th floor unit in the condo tower that put Arquitectonica on the map. The Miami-based architecture firm designed the signature building at 2025 Brickell Avenue, which is known for its glass facade, a primary color scheme and a five-story palm court in the center of the structure. The element makes it appear as if the building has a square hole at its center. The palm court features a red spiral staircase, a Jacuzzi and a palm tree that can be seen from the ground level.