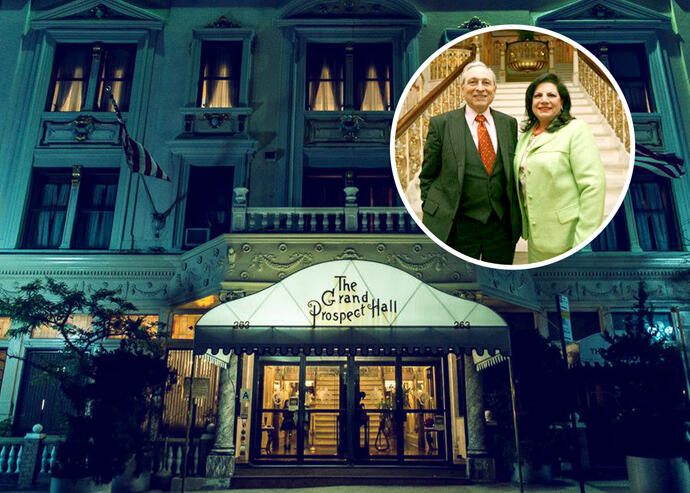 Grand Prospect Hall in Park Slope is changing hands as part of a $30 million sale with 11 adjacent properties.

The 12-property assemblage was sold to Angelo Rigas through limited liability company Gowanus Cubes, PincusCo reported, citing city records. All 12 of the properties are on Prospect Avenue between Fifth and Sixth avenues in Brooklyn and combine to form 73,104 square feet of built space. Rigas’s attorney on the deal, Oded Ben-Ami, declined to comment on what is planned for the site. The banquet hall is the most notable property in the assemblage. It was owned by Michael and Alice Halkias, who appeared in local commercials in the 1980s that were parodied several years ago by Saturday Night Live. A decade ago they planned to build an 11-story hotel next door. Grand Prospect Hall was added to the National Register of Historic Places in 1999.

The banquet hall was built in 1892, according to Eater, and has made appearances in movies such as “The Royal Tenenbaums” and “Cotton Club” and once hosted a Vogue photo shoot.

Michael Halkias died of coronavirus complications at the age of 82 several months into the pandemic. The banquet hall and restaurant on the property closed last June and has remained shuttered.

Alice Halkias served as the signatory on the sale of the hall.

It’s not clear what the new owner plans on doing with the banquet hall and the rest of the properties. Controlling the assemblage gives Rigas, an electrical contractor, the option of constructing a substantially larger building at the address.

His father, Gregory Rigas, built several projects in the area, including the 80-unit rental tower 574 Fourth Avenue, near 16th Street, The Real Deal reported in 2011.