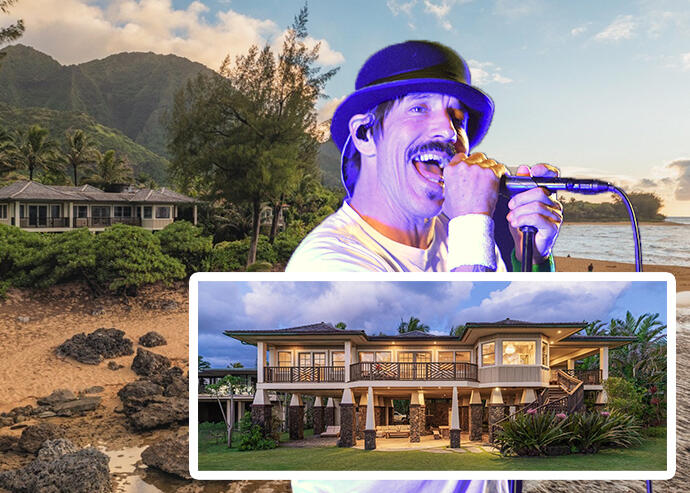 Anthony Kiedis and his home at 7336 Alealea Rd,
Hanalei, Hawaii (Redfin and Getty)

Red Hot Chili Peppers frontman Anthony Kiedis is looking to unload his custom-built home on the Hawaiian island of Kauai.

Kiedis is asking just under $10 million for the roughly 3,000-square-foot home, according to Dirt. It has three bedrooms, 3.5 bathrooms and an unusual history.

In 2005 Kiedis bought an undeveloped parcel totaling 0.42 acres for $2.6 million from actor Sylvester Stallone and set out to build a residence.

Community opposition and a complicated approvals process kept him from breaking ground on the home for several years. The project was ultimately completed in 2008.

The home is steps from the shore and sits on lava stone columns to protect it from flooding. Wood abounds in the abode, notably walnut floorboards and reclaimed teak cabinetry. Much of the furniture is naturally stained wood as well.

The 58-year-old Grammy winner wasn’t the only one to have trouble building his home. So did his neighbor Joe Brescia, who bought an adjacent parcel from Stallone in 2000, only to have community members claim his project would desecrate a burial ground. Brescia eventually built his own beach house and sold it for $4.9 million in 2016; no hauntings have been reported.

The property sits on Kauai’s North Shore, an area popular with surfers and celebrities alike. Other residents include actors Pierce Brosnan, Bette Midler and Will Smith, as well as musician Glenn Frey.

Following a $53 million purchase of 600 acres last year, Mark Zuckerberg and Priscilla Chan now own 1,300 acres on the North Shore.

Locals appear protective of the area — Zuckerberg and Chan were fiercely criticized for wanting longtime residents to move off of two acres surrounded by his holdings.