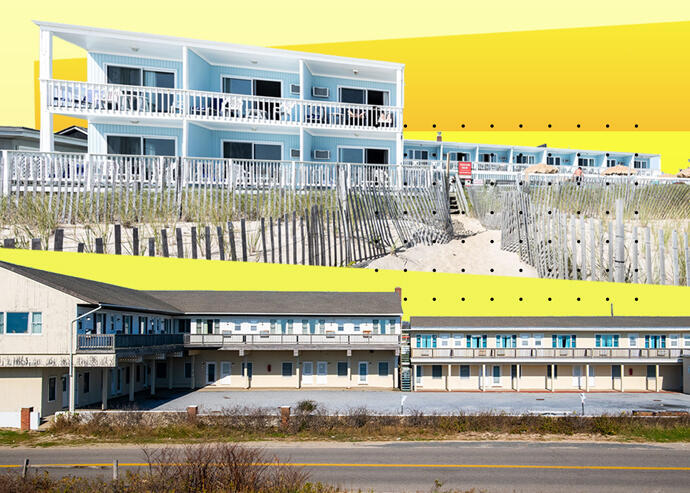 Two oceanfront hotels in Montauk have hit the market, asking $45.9 million and $25 million.

The pricier listing, the Sands Motel at 71 South Emerson Avenue, was built in 1951. A main building has 36 rooms, all with decks facing the ocean or Fort Pond. A separate building has eight suites with decks. There is also a two-bedroom cottage.

The Sands’ website says it has been family-owned since 1951 “under the vision of Abe and Julia Hausman.” The third and fourth generations are now running the establishment, it says. The owners did not return inquiries about why they now aim to sell. Across the street at 84 South Emerson Avenue, on the beach side of the road, the Ocean Surf Resort has 30 rooms, each 550 square feet with private balconies or decks. The oceanfront common area includes a heated in-ground pool, a deck lined with lounge chairs and a barbeque grill with dining tables. Property records list the owner as Ankit & Avani Enterprises.

The Ocean Surf was listed in late 2017 for $25 million. Six months later the asking price was reduced to $22 million, according to Curbed, which described the property as only half an acre but right on the water with 160 feet of beach frontage.

Both hotels are situated on beach property owned by the Town of East Hampton. The town both maintains the beach and prevents new developments from being built, according to Nest Seekers’ Patti Ann Kelly, who has both listings.

Hotels on the East End have fared better than those in New York City during the pandemic. As of August, nearly 41 percent of city hotels backing CMBS loans — representing about $1.4 billion in loans — were on a list designed to warn investors that the mortgage was at risk of being transferred to special servicing.

However, business owners have been following residents to the Hamptons to escape the city or take advantage of remote work, and some property owners have cashed in. Earlier this year, Rick’s Crabby Cowboy Cafe on Lake Montauk sold with an asking price of nearly $15 million. Ruschmeyer’s, a three-acre property with 19 hotel rooms, a restaurant and a bar, also sold. That property was last listed at $35 million.