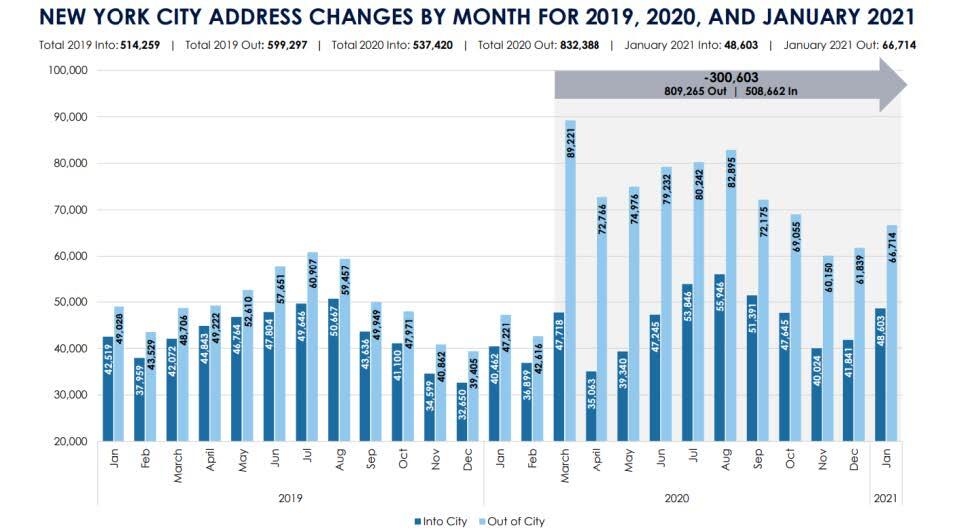 *The numbers in the chart above represent changes in inbound and outbound migration from 2019- present.

The Shift in the Industrial Landscape *Core reflects attended rental buildings from all neighborhoods south of and including the UWS and Manhattan Valley on the West Side and Carnegie Hill & Yorkville on the East Side. Technology is like the mythological Greek God, Kronos, who eats his children. He is the god of time. Technology creates time efficiency but eliminates jobs. Initially, technology eliminated manual labor, now, with AI, it is encroaching on mental work. This is probably already manifesting in the Finance industry that has seen such sluggish wage and job growth over the past decade and is so amenable to automation. This is evolutionary and, therefore, inevitable. So, we should foresee all its potential benefits.

It is eroding the class system, with its inherent inequality. Look at the Tech Titans today and their modest origins. Humans are not predestined to labor and management roles. We need to grasp the greatest paradigm shift, that life is not a zero-sum game because we are all capable of being creators.

To realize this potential, we must educate people. In our country, one of the greatest impediments is the inability to reward teacher excellence in the public school system. This must change. The availability of learning tools through technology can help this transformation. We need to foresee these shifts in jobs and human capital to adapt with minimal dislocation and maximum benefit.

The Species as Group Animal

Humans are a social animal. Our history is of social grouping as hunters, tribes and nation-states defending the territory. The point is, no matter the level of structure, we function in groups. Perhaps the most intriguing notion in forecasting the future of this, or any city, depends on the radical transformation of life by technology. While we have all been witness to the adaptation to remote interaction, the Information industry worker is young and global, not just in national origin, but in how they see the world. It is all connected, and they are all connected. The desire to be together, in groups, is part of their DNA. And, generally, they are younger and not yet focused socially through their children.

Although they may spread out a bit more, they want to live in cities, to connect with their group and their interests. Our challenge will be to keep the others following them with better city schools, safety, an upgraded infrastructure and more investment in art and culture. DUMBO is a good model here.

We can assume that job growth will continue in the post-Covid environment at a rate similar to what occurred in the years following the GFC. We infer this because, except for Finance, there was steady job growth generally and outsized job growth in Business Services and E-commerce.

With jobs recovering and migration trends turning favorable, we believe that demand for rentals in the City will continue to be strong going forward. This is supported by increasing rents and the uptick in transactions recently across the City.

This leaves supply as the final determinant for projecting rent recovery. The chart below compares new supply of market rate rentals in core areas after the GFC and today. As shown, the annual and overall figures are down significantly in the City in comparison to a decade ago.

Like during Covid, but on a lesser scale, NYC also saw rents fall during the GFC. Core Manhattan rents dropped nearly 15% from 2008-2009. The outer boroughs dropped, but not as much. The data is limited as the outer boroughs had just begun gentrifying. Therefore, Manhattan has been used as the basis for comparison here.

From the low in May 2009, full recovery occurred in the fall of 2011, two and a half years after the GFC. It is interesting to note that rents recovered in Manhattan at the same time as Business Services jobs, the most substantial workforce in the City supporting attended rental demand. It is also important to note that Business Services jobs are recovering at a much faster rate from Covid than from the GFC and are expected to recover by mid-2022.

As rents in many areas have already begun growing, with jobs recovering at a faster rate than after the GFC, with migration trends turning and with new supply much lower than post-GFC levels, we believe rents in the City will recover to pre-pandemic levels in less than two years.