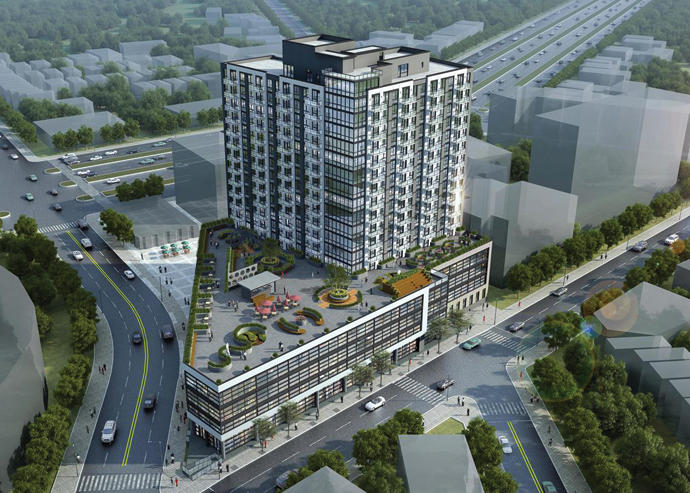 A rendering of Justice Avenue Tower in Elmhurst

On March 1, Central Queens Academy Charter School posted a celebratory message on its Facebook page: “After years of searching, we have finally found a permanent home for our school that is worthy of our incredible scholars and families.”

The academy, which was operating out of two facilities in Queens, had been searching for a new, united home for more than five years. After viewing more than 40 sites and enlisting the help of the brokerage Transwestern, it settled on an 81,000-square-foot facility across three floors in the under-construction Justice Avenue Tower in Elmhurst.

“We love the idea of our entire school community being in one building,” said Ashish Kapadia, the academy’s interim executive director. “It’s a lot better for instruction, a lot better for our school culture.”

It was also a good deal for the developer, United Construction & Development Group, which owns the 271,000-square-foot building at 88-08 Justice Avenue. The school signed a 32-year lease (structured as a condominium leasehold to take advantage of the school’s nonprofit, tax-exempt status), paying $45 per square foot, according to Steve Zhu of Compass, who represented the developer.

Though the pandemic froze some sectors of the commercial real estate market, including office leasing, educational facilities — namely charter and private schools — have continued to sign leases, and they’ve increasingly become a lifeline for landlords.

“If you own a building right now that was zoned for commercial use, one of the first calls you make is to a charter school and see if they’re interested,” said Eastbound Construction’s Alex Elkin, who is working with the development team behind the Dream Charter School campus in the Bronx’s Mott Haven neighborhood. “Because they’re expanding, they’re well funded, and they’re doing well.”

Charter schools, or independent public schools run by nonprofit organizations, can’t expand endlessly. New York state regulates the number of schools permitted — there are approximately 267 throughout the five boroughs — and the city’s cap was reached in 2019. Unless the law is amended by the state legislature, new ones can’t open. Charter proponents have been fighting to raise the cap, but they’re facing political headwinds.

“It’s not an expanding practice in New York City,” said Transwestern’s Stephen Powers, who worked with Central Queens Academy on its recent deal.

However, existing schools can move into new buildings, as Central Queens Academy is doing — and that’s generating excitement among some real estate insiders. Among them is David Umansky, CEO and co-founder of Civic Builders, a nonprofit that provides schools with real estate solutions, such as construction, leasing and financing.

“There are quite a number of charter schools that are trying to figure out how to expand and how to serve more students, even with the cap in place,” Umansky said.

But finding the right space can be tough. Offices are difficult to convert because fire safety and HVAC systems, electrical services and even ceiling heights are often not adequate, said Powers.

“You generally have to deal with these off-market projects with school developers to be able to build ground-up for them,” he said.

Former manufacturing or warehouse buildings are easier to convert into school buildings, and there’s no shortage of that space around the five boroughs. But they’re more difficult to lease because of competition from e-commerce and other industrial clients, which have ramped up their leasing activity during the pandemic.

“The amount of vacant commercial space around the boroughs is staggering, and charter schools are absolutely taking advantage of the situation,” Elkin said. “There’s an opportunity there for them.”

Compass’ Zhu said that he is marketing a vacant parcel at 41-50 21st Street in Long Island City, aiming to attract large medical institutions or charter schools.

The site could accommodate a new building between 280,000 and 700,000 square feet, and a couple of schools have shown interest in the site, he said.

Mission-driven charter schools often target areas that are underserved by the existing public schools, but “the cost of land hasn’t gone down that much” in those areas, according to Powers.

“The only difference is that more landlords are willing to consider [a charter school] now,” he added.

Of the final seven charter school contracts approved in 2019, for example, four are planned in the Bronx, two in Harlem and one in Brooklyn. Powers and his colleague Lindsay Ornstein represented two of the four new Bronx schools. They also closed a 96,000-square-foot leasehold condominium deal for Democracy Prep Public Schools in January to launch two new elementary schools in the South Bronx.

The company signed the lease in June 2019 in a joint venture with the building’s developers, Jonathan Rose Companies and L+M Development Partners, when the massive development was in its infancy. And in May 2020, Harlem Children’s Zone, a community-based nonprofit founded by education reform advocate Geoffrey Canada, claimed the space as a sublease tenant to operate its Promise Academy Charter School II.

The extra step was necessary to align two different timelines: Affordable housing projects take about five to seven years to complete, but charter schools can make commitments only three or four years in advance.

Charter schools are often confused with private schools, but they have different operating models — and different real estate needs.

One big difference: In New York, private, for-profit schools often ink big deals in more affluent neighborhoods. Right before the pandemic, Tishman Speyer signed a 20-year lease with Whittle School and Studios, which will take over the entire 622,000-square-foot space available at the Wheeler, the $500 million redevelopment atop a Macy’s in Downtown Brooklyn. Although deal terms were not disclosed, asking rents reportedly ranged from the $60s to $70s per square foot.

Whittle was originally set to partially open its Brooklyn campus last fall, but that hasn’t happened yet. The school’s website recently posted a notice that it is now taking applications for the fall. Neither Whittle nor Tishman Speyer responded to requests for comment.

In Brooklyn, BASIS will occupy a 62,000-square-foot space at Extell Development’s 68-story-tower in the City Point complex, along with an existing 99,000-square-foot Red Hook campus. And in Manhattan, it will open its second, a 34,500-square-foot location at the former Chelsea Art Museum building at 556 West 22nd Street. It still has a campus on the Upper West Side as well.

Matt Dick, president of BASIS, said it took over two years to identify the City Point location and more than three years to secure the Chelsea location.

“As the campuses reached capacity due to the ever-growing demand in both the Manhattan and Brooklyn communities,” Dick said, “we knew we needed more real estate space — not an easy feat in New York City.”