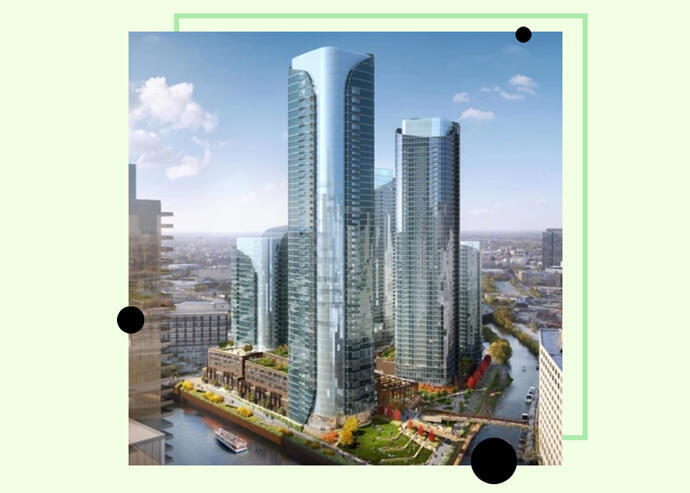 Onni Group plans to transform industrial Goose Island with a mixed-use megaproject that would bring 2,650 apartments and a hotel spread across five towers, all inside eight acres of land.

The Vancouver-based firm, which has developed houses, apartments and commercial buildings across the U.S., unveiled plans for Halsted Point on Thursday night, the Chicago Tribune and Crain’s reported.

The highlights include four residential towers, with the tallest rising 56 stories; a 28-story high-rise with a 247-key hotel; and over 100,000 square feet of office space. A pedestrian bridge would also be constructed over the Chicago River.

The proposal calls for construction in four phases, and still faces a long road of city approvals and zoning variances. The bridge itself would require backing from the U.S. Army Corps of Engineers. The development would rise on the swath of land Onni bought for $38 million in February 2019, which encompasses a Greyhound Bus maintenance complex. The company will exit the site on the 900 block of North Halsted Street in early 2022, when Onni plans to begin preliminary work.

In all, Halsted Point would include 2.7 million square feet of buildings and would take over a decade to build, with roughly 20 percent of the rental units set aside as affordable. Hartshorne Plunkard Architecture created the plans, which include nearly four acres of public space, 1,500 parking spaces — almost all underground — and over 1,000 linear feet of river access, according to reports.

Omni is the first developer to plant a residential real estate flag on Goose Island, which until 2017 was only zoned for industrial use. But a citywide rule covering nearly four miles along the river paved the way for several major mixed-use projects, most notably Sterling Bay’s $6 billion Lincoln Yards development, which won approval in 2019, after a long fight.

Onni, which in recent years has become one of Los Angeles’ biggest developers, is not new to Chicago. The company’s projects include a 41-story residential tower in River North, a 373-unit building in the West Loop and a three-tower, 1,289-unit development in Old Town Park.