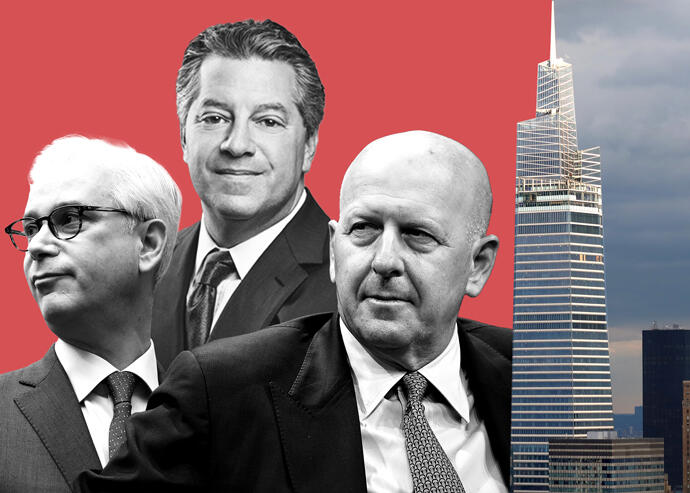 Goldman Sachs, Wells Fargo leading $2.25B refi of One Vanderbilt Goldman Sachs and Wells Fargo are leading a massive refinancing of One Vanderbilt that will allow developer SL Green Realty and its partners to cash out hundreds of millions of dollars from the newly completed Midtown skyscraper.

The banks are heading a consortium of lenders putting together a debt package for the 58-story, Grand Central-area tower to the tune of roughly $2.25 billion, sources familiar with the financing told The Real Deal.

It’s set to be one of the largest single-building commercial real estate loans in New York history. And it will provide a major windfall for the Marc Holliday-led real estate investment trust and its partners at a time when equity investors are still skittish about Manhattan office properties while cheap debt fueled by low interest rates is in abundant supply.

Representatives for SL Green, Goldman Sachs and Wells Fargo did not immediately respond to requests for comment. The REIT and its partners are being advised on the financing by a Newmark team led by Dustin Stolly and Jordan Roeschlaub, who declined to comment.

In an earnings release published Wednesday afternoon, SL Green alluded to a large upcoming refinancing at the building.

The financing package is expected to close in June. The lenders plan to securitize the debt into a huge single-asset, single-borrower CMBS deal, generally reserved for blue-chip buildings.

SL Green and its partners – National Pension Service of Korea and Hines – opened the 1.7 million-square-foot One Vanderbilt in September, and as of January it was roughly 73 percent leased.

The building is anchored by TD Bank and other tenants include the Carlyle Group, Greenberg Traurig, McDermott Will & Emery, Oak Hill Advisors, Hodge Ward Elliott and KPS Capital Partners. SL Green is also headquartered at the property.

In 2016, Wells Fargo led a consortium that provided SL Green and its partners with a $1.5 billion construction loan for the Kohn Pedersen Fox-designed skyscraper. As of this past December, the balance on that loan stood at roughly $1.2 billion. So with a $2.25 billion refinancing, SL Green and its partners could cash out more than $1 billion in proceeds from the transaction.

It would be a huge success story coming at a time when New York, buoyed by high vaccination rates, is coming back to life. And despite the ups and downs in the investment-sales market – SL Green achieved strong pricing last year when it sold 410 Tenth Avenue for $935 million, while competitor Vornado Realty Trust pulled a pair of buildings in San Francisco and New York due to lackluster interest – the debt markets have remained comparatively strong through most of the pandemic. Office occupancy rates, however, remain at historic lows – The Partnership for New York City surveyed companies in early March and found that just 10 percent of Manhattan office employees had returned to the workplace.

Few properties in New York City have landed financing packages of this size. In 2017, Boston Properties received a $2.3 billion loan for the General Motors Building.