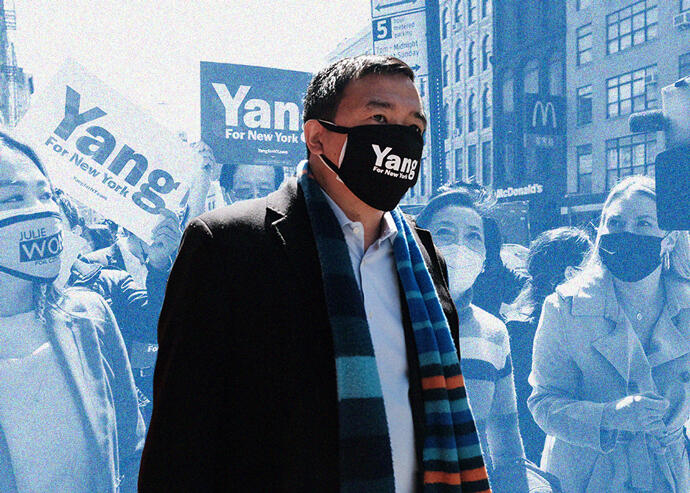 New Yorkers no longer have a choice: We have to take Andrew Yang seriously.

The Democratic primary for mayor is less than two months away and he’s leading the polls as the eight identifiable candidates begin to invade our lives with TV ads.

Yang is winning mostly because of name recognition. He’s famous for being famous. Voters have no idea what he does for a living or what his skills are, but he has a following and he might win. It’s time to consider whether this smooth talker actually knows what he’s talking about.

Yesterday he unveiled his affordable housing plan in a 12-minute speech. I’m going to grade it on three criteria: Is it good policy? Is it innovative? Is it achievable?

The first thing to consider when candidates talk housing is whether they even understand it. Based on his speech, Yang does.

He began by properly framing the issue, noting that the housing problem limits social mobility, hampers education, increases homelessness and spreads Covid. His comment that 2,600 New Yorkers left the city weekly from 2010 to 2019 was rhetoric — he failed to say how many moved in — but it’s fair to say that some moved for better housing elsewhere.

Then he cited the main problem with New York City’s housing: We don’t build enough.

Anyone who says our problem is “too much luxury housing” or “not enough affordable housing” is shilling for votes and not getting to the crux of the problem. Yang seems to understand that supply and demand largely determine housing prices. Reducing demand (as Covid did) is not a good way to lower them. That leaves one option: increasing supply. Yang gets that.

Is that innovative? No. Most of the candidates agree, including Kathryn Garcia, Ray McGuire, Eric Adams and, of course, Sean Donovan, the only housing expert in the race.

Is it achievable? Yes. New York is not uniquely resistant to housing development. Whether Yang has the necessary leadership skills is another matter, but at least he passes the economics test and is not running around blaming developers and gentrification. Grade: B+

Yang also adeptly described the struggle to allow more housing: “A rezoning of a neighborhood to build denser, new types of housing runs into a bureaucratic gauntlet that favors the loudest voices in a room, not necessarily the most sensible,” he said. “The needs of the country’s largest city have been drowned out by narrow interests most concerned with maintaining the status quo — and their own status.”

That surely made city planners cheer and Nimby groups curse. So, points for Yang. Grade: A.

His next policy idea is to spend $4 billion a year to build or preserve 30,000 affordable units annually. That’s more than Mayor Bill de Blasio’s record-high spending and not at all innovative. It’s not terrible, but it’s really a fallback for governments that cannot foster a functional housing market.

Affordable units are allocated by lottery, compelling many “winners” to move away from their families, support networks and jobs. The below-market rents are a blessing but essentially trap tenants in the units. A market that supplies affordable housing organically allows people to move when their household gets bigger or smaller or when they get a better job far away. That should be the goal. Most of the country has achieved it. Grade: B-.

Yang then attacked the political system known as “member deference” by which neighborhoods or project sites are rezoned: The decision falls to the local City Council member.

“If elected, I plan on working with the council to eliminate member deference,” he said.

That’s like saying, “If I come across lions with a fresh piece of meat, I will work with the pride to snatch it away.”

Yang did not say how he would end the policy or how he would replace it. He gets an A for his diagnosis, an F for his realism and an incomplete for his solution.

He did vow to speed up the seven-month political approval process for 100 percent affordable projects. “It’s counterproductive to waste months in one hearing after another, waiting for advisory votes, when we often know what the right thing to do is,” he said. Nicely put. He did not, however, say how he would speed it up, such as by sparing such projects from the process entirely. And what about mixed-income projects? Grade: B.

Yang attacked parking minimums — rules that force developers to create private parking spaces proportional to the project size, regardless of necessity. This is not a new idea but it’s a good one because it allows for cheaper housing and reduces driving. It is cheered in areas well served by subways and booed in transit deserts, an obstacle Yang did not address. And he did not say if developers would be compelled to pour the savings from not having to build parking into affordable housing. Grade: A-.

He called for bus rapid transit to allow for upzoning. Good idea, but upzoning has to come first. Bus service is expensive in low-density areas that lack riders, and a state agency controls buses. Grade: B+.

Yang said he would bring back single-room occupancy, which was banned for being unfair to the poor — a decision that made housing more expensive. “We should embrace ideas like co-living,” he said. Innovative? Not exactly. But wise and feasible, although he failed to note that a new state law would be needed or say what he would do when SRO tenants have kids. Grade: A-.

Accessory dwelling units, sometimes called granny flats or basement apartments, should be legalized, Yang said. The city has a pilot program for this but progress has been slow. Yang did not mention fire-safety rules and other impediments to making this work, and exaggerated how many units it would create. Grade: B.

Yang called his speech “just a start” — indeed, his website has more details and other ideas. So do the other candidates, and voters must consider them as well. The tougher question is which contenders have the political skills to make these changes. Only Adams and Scott Stringer have held public office, although Donovan, Garcia and Maya Wiley all have government experience.

But it is at least comforting to know that Yang has a solid grasp of housing issues. Either that or a very good speechwriter.