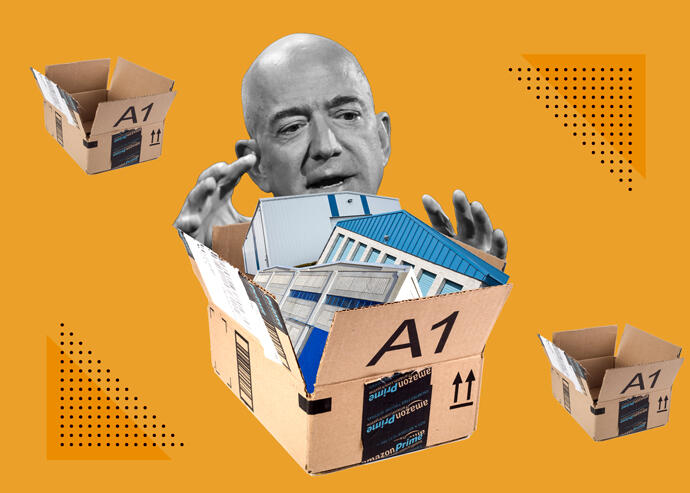 No room in the warehouse: Amazon fuels shortage Amazon takes up warehouse space — a lot of it.

It’s to the point where the vacancy rate is so low in some North American cities that their economies could be throttled, according to Colliers International Group and CBRE reports cited by Bloomberg News.

The warehouse vacancy rate in Toronto shrunk to 0.5 percent as Amazon snatched up warehouses in response to the e-commerce boom, the publication said. That’s the lowest among major North American markets.

Other Canadian locales aren’t far behind, with vacancy rates in Victoria and Vancouver at 0.7 percent and 1 percent, respectively. They are followed by Montreal (1.4 percent), Los Angeles (1.8 percent), Salt Lake City (2.2 percent) and central and northern New Jersey (2.7 percent), Colliers found. The U.S. average is 5.5 percent.

Amazon is the main driver of the squeeze, having increased its logistics footprint by about 12 million square feet across nine major Canadian markets since late 2019, according to the publication.

E-commerce tripled its share of total Candadian retail sales to 10.4 percent at the start of the pandemic, increasing the need for warehouses and fulfillment centers. Costs to lease industrial space went up by 25 percent.

Amazon rented a quarter of all the space that came up for lease in Toronto last year, and has an even larger footprint in Montreal and Ottawa.

At this rate, Canada could run out of warehouse space by the end of the year, CBRE predicted.

Desperate times call for desperate measures, and the lack of space has some manufacturers packing orders in parking lots, Bloomberg noted.

Logistics costs amount to roughly 9 percent of the country’s gross domestic product. A lack of space would drag down the country’s economy, the publication reported.

“There are fewer jobs, fewer permanent jobs that can be created, because companies aren’t able to fulfill demand,” Jan De Silva, president and CEO of the Toronto Region Board of Trade, told the news service.

As for Amazon, it doesn’t look like the company plans on slowing down. It just leased a massive warehouse in Woodmere that brings its planned warehouse space on Long Island to more than 1.4 million square feet.