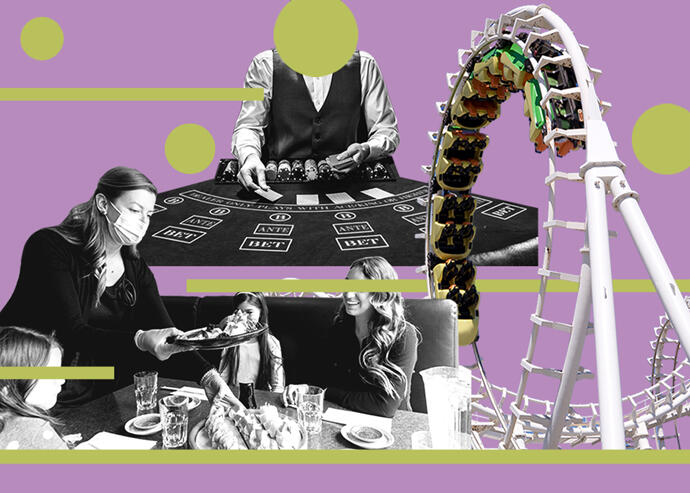 A weaker-than-expected month for job gains had one bright spot, and it’s the same sector that has been leading employment for several months now.

The leisure and hospitality sector led employment gains for the third straight month, bringing back 330,000 workers in April. Restaurants and bars did more than half the hiring, while recreation centers (such as amusement parks and casinos) hired 73,000 people and lodgings added 50,000 positions. That’s on par with the industry’s performance in February and March.

But overall job growth dropped to 266,000 positions, dragged down by losses in manufacturing, temporary employment services, and transportation and warehousing.

The weak hiring numbers contradicted the approximately 1 million jobs many economists had predicted, based partly on last month’s hiring data — which was revised down on Friday to 770,000 jobs from 916,000 — and a record low number of unemployment filings since the pandemic began.

“This report suggests that the rate of improvement in the job market is going to be much less consistent than other indicators would suggest,” said Mike Fratantoni, chief economist at the Mortgage Bankers Association.

Despite a still-booming housing market and 17,000 new positions for workers in real estate leasing and renting — which accounted for nearly all new financial activities jobs — hiring in construction remained largely unchanged last month.

The tepid hiring “doesn’t match the strong growth in housing starts data, which would imply the need for more workers,” said Fratantoni.

For other sectors, “supply chain challenges across the economy are likely impeding the pace of activity,” he said.

For example, 50,000 positions were eliminated at grocery stores last month, which had boomed as people cooked at home during the pandemic. Outside the grocery sector, retail companies lost a relatively small number of workers.

There was some good news for office landlords: The pace of workers returning to their offices grew in April, with 18.3 percent of workers remaining remote due to the pandemic. That’s down from 21 percent in March and 22.7 in February.