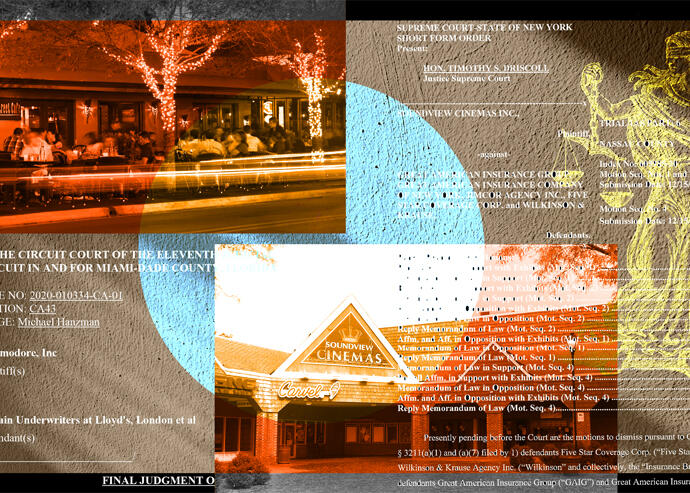 GreenStreet Cafe’s lunchtime rush had just ended on a recent afternoon, but the clamor of dishes in the kitchen hadn’t ceased. Business has finally picked up at the popular eatery in Miami’s Coconut Grove, known for its red velvet outdoor couches, a place where athletes and artists have dined over the past 30 years.

A judge in March dismissed his lawsuit against GreenStreet’s insurers, which refused to pay for pandemic-related losses. Shutdowns and other restrictions cost him $2.5 million, Bignon said, and he had been hoping to get $1 million from the insurer. But because the owner’s insurance only covered “physical loss or damage,” the judge ruled, the Covid claim did not apply.

Judges across the country have cited that phrase in numerous rulings against businesses that have sued to recoup Covid losses. Attorneys for the plaintiffs argue that judges are merely using the insurers’ own interpretation of the phrase, and say actual “physical loss or damage” caused by the coronavirus is still unknown.

To Bignon, the insurers are merely trying to avoid payouts. “They have trillions of dollars in the bank for a safety net in case there is a crisis, and then they always find a way not to pay,” he said. “It’s a booby trap by the insurance company.”

He isn’t the only one fuming.

More than 1,500 lawsuits have been filed nationwide against insurers since the start of the pandemic, and initially, at least, the courts have overwhelmingly dismissed claims for coverage, according to a University of Pennsylvania Carey Law School database that tracks the filings. Judges have taken pains to express sympathy for hard-hit business owners, but say the law and the way the insurance policies are narrowly written tie their hands.

Most of the filings are still pending. But of 290 federal and state lawsuits insurers sought to dismiss, a judge granted 244 of those motions — 84 percent — according to the database.

Because the pandemic laid waste to nearly every industry, the suits have come from restaurants, bars, movie theaters, clothing and jewelry stores, hotels, car dealerships and hospitals, among others.

The restaurant’s losses were not covered by the policy because it hadn’t shown “demonstrable, physical alteration” or “physical loss or damage,” wrote California Federal District Court Judge Marilyn Huff in her decision. Again, the judge noted the court “sympathizes with plaintiffs and other businesses suffering financial hardships during the Covid-19 pandemic.” The insurer offered coverage only under its communicable disease provision for one Islands location in Agoura Hills, California, where two employees had tested positive for Covid, court documents show.

Affiliated FM, in a statement, said it strongly believes its policies “are clear on the coverage provided.”

The hurricane that has swept through businesses has been an invisible one, but courts have not been persuaded by the argument that government-mandated closures and the possible presence of Covid on surfaces in bars, restaurants and stores amount to that “physical loss or damage.”

The theater’s attorney, Steven Glassberg, said insurers borrowed the “physical loss or damage” language from one another’s policies. Now, judges are using that reasoning to steer their decisions. And that’s the problem, said the attorney, of the law firm Glassberg & Associates.

“Once you have one judge who says, ‘This doesn’t qualify because there is no physical loss, there is no physical damage,’ every other judge has cover now to say, ‘Someone else decided it, and I am stuck with that interpretation,’” Glassberg said, adding that he will appeal the decision. “It’s unfortunate that that’s the way these court cases are all playing out in favor of an insurance company, and against the general economy and against small businesses.”

Anthony Proscia, an attorney who represented Five Star and Wilkinson, noted the “adverse economic impact on businesses and small businesses.” But, he added, “our insurance broker client also is a small business and has been impacted as well.”

But a case in North Carolina may serve as reason for hope for business owners — or it may just be an outlier.

In October, a judge there sided with 16 restaurants that sued insurer Cincinnati Financial Corporation, saying the businesses did suffer physical loss. Cincinnati Financial faces 153 Covid-related business coverage suits, second only to Hartford Financial Services Group’s 230, according to the UPenn tracker.

Despite that case, attorneys say only a decision from a state’s highest court in favor of businesses would make an impact on future decisions. So far, that hasn’t happened.

In a statement, the American Property Casualty Insurance Association said the policies are not intended to cover pandemic-related losses and weren’t priced that way. The group, the primary national trade association for home, auto and business insurers, said Covid coverage lawsuits “would undermine the stability of the insurance industry and its ability to pay claims on all existing insurance policies. Only the federal government can be the financial bridge for a crisis of this scale, proportion and duration.”

The case for appeal

For now, many of the businesses that lost their cases have appealed. Bignon, the GreenStreet Cafe owner, is among them.

Hugh Lumpkin, an attorney who represented Bignon, said the common interpretation that virus claims don’t meet the threshold of actual, physical damage to property is premature. He said the virus may, in fact, be damaging property, but that’s not a question for the courts.

“This is a question for scientists,” said the Reed Smith attorney. “The initial reaction of most people, that the virus only affects the surface of property and can be cleaned, I don’t think that’s the state of knowledge today.”

John Mullen, an attorney for the insurers, didn’t respond to a request for comment.

Businesses may still have some hope. In his ruling, Hanzman said the sooner the Florida Supreme Court takes up the issue of the meaning of “physical loss or damage,” the better. The “contest,” he said, over whether it allows coverage might be much closer than rulings so far suggest.

For Bignon, the exasperation is evident.

“The judge was looking at other cases in the state and in the country to make a decision. So everybody is looking at each other’s shoulder,” he said. “I have never in 30 years got $1 from my insurance covering my loss of business. This is not just me. That’s the system. There is something wrong.”