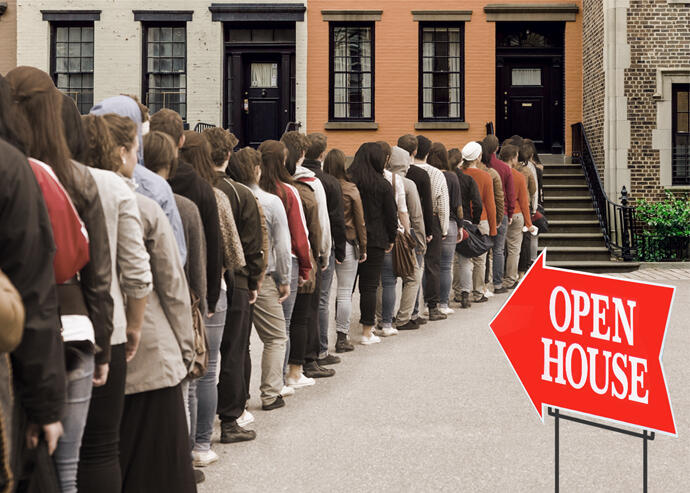 The reopening of NYC has created a surge of demand for apartments. (Getty)

The day after Mayor Bill de Blasio’s announcement that New York would be back at “full strength’’ by July 1, with stores, offices and theaters reopening, Douglas Elliman agent Janna Raskopf woke up to 67 rental apartment inquiries in her inbox. And the volume has remained steady, day after day.

In Raskopf’s 14-year career, she’s never seen a surge in rental demand like this.

“There’s almost like a panic amongst tenants,” Raskopf said. “I don’t know whether tenants thought they were going to have through the summer, but I think a lot of people were like ‘Wait a second, I don’t live here, I need to have housing and I need to get it fast.’”

De Blasio’s remarks set off a flurry of real estate activity not seen since the start of the pandemic. Employers and office landlords are preparing for workers to return, while employees who have been working remotely from outside of the city are searching for apartments. Retail brokers anticipate a surge in leasing as stores and restaurants, cocktail bars and cafes gear up to serve returning workers.

Before de Blasio’s announcement, Raskopf would rent two or three apartments in a good week. Less than a week later, that number jumped to eight, with more than 15 applications queued up as of midweek.

Prospective tenants — especially those from outside the city — offered to rent sight unseen or solely based on video tours, Raskopf said. Some said they would apply for every unit in a building in hopes of securing one within the next 30 days.

Pricing is a little more challenging since agents don’t have the data to determine how much the market has shifted since the start of the pandemic, said Pamela D’Arc, a top broker at Compass.

“In general, people feel that the inventory is shrinking and prices are less negotiable, but they have not shot up,” D’Arc said.

Demand is even higher for properties with amenities like outdoor space, D’Arc said. She said she recently listed a rental in the Meatpacking District that went for 7 percent above its asking price.

His advice: Hurry up.

“If you are in the market, I would suggest locking in that lower rate. You’re probably better off signing a two-year lease at a lower rent, because chances are the rents will be going back up in the fall,” Ahmetovic said.

The mayor’s announcement may have accelerated plans that were already in the works.

Executives at commercial brokerage Newmark said they expect an uptick in office and retail leasing activity as the city reopens, and project long-term growth in the flex-office space as more companies move toward a hybrid, hub-and-spoke office model.

“We are definitely seeing an uptick in tours, an uptick in activity, and more and more as we speak with folks, plans are actually being put in place similar to the plans that we have in place to return to the office,” Newmark Chief Revenue Officer Luis Alvarado said on the company’s first-quarter earnings call last week.

Alvarado added that retail has “all of a sudden become very active” as more people get comfortable with the idea of coming back to the office.

Physical occupancy of office buildings in New York City has been stuck between 10 to 15 percent since the city lifted its initial pandemic lockdown last summer, according to data from office security firm Kastle Systems. But office landlords say their tenants are now actively making plans to bring most employees back to the workplace.

RXR Realty CEO Scott Rechler said he thought the sentiment among his office tenants had shifted since March, when President Joe Biden announced a goal of getting the nation close to normal by July 4 through vaccination.

“That gave the companies the clarity they needed to move forward with plans,” Rechler said. “Most of our clients are planning to come back after Memorial Day, and then working their way up to Labor Day.”

“We’re hearing from our tenants and from other [office] users that everybody’s mobilizing and starting to come up with specific plans to get their employees back into the city and to their offices,” Rudin said.

The back-to-work rush has been even more visible in the flex-office environment, said Ryan Simonetti, CEO and co-founder of Convene, which operates flex offices and meeting space.

“In the last few weeks, we’ve actually seen almost a 20 percent increase [of members coming back to offices] week over week,” Simonetti said. “So there’s definitely people starting to come back to the office at greater numbers than they were even a few months ago.”

Silverstein Properties’ Lisa Bevacqua, who oversees some 13 million square feet of offices, said the landlord is expanding its office tenant hospitality program, called Inspire, which provides tenants with access to co-working space, conference facilities and other amenities available across the Silverstein portfolio.

“We’re offering our customers the flexibility to choose the work environment that best suits their needs on any given day,” Bevacqua said. “It will be fun for them to be able to explore and take advantage not only of the flexibility and location, but just the diversity and the character of the various buildings that we offer.”

After a series of starts and stops in the efforts to reopen the city, the momentum toward this summer is giving the real estate industry hope that the worst is behind them.

“Anecdotally… several of the brokerage houses have told their clients to get into the market now,” Vornado Realty Trust CEO Steve Roth said on the company’s recent earnings call. “[They’re saying] that this is the bottom.”