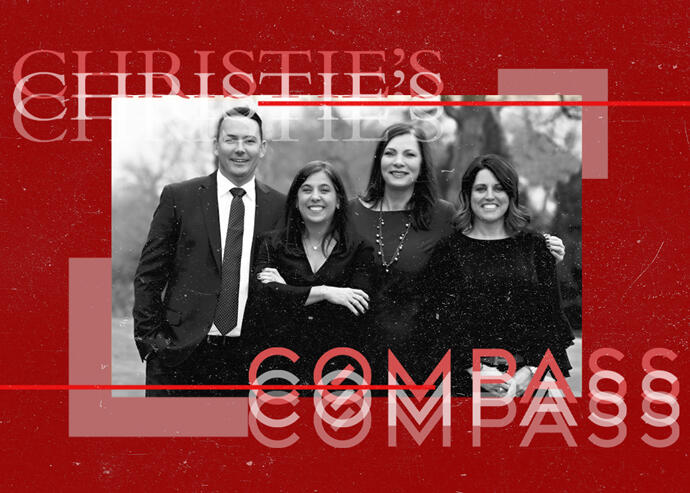 Compass has been hit with another lawsuit regarding recruitment — this time in northern New Jersey.

The complaint, filed by a Christie’s International Real Estate affiliate based in Ridgewood, New Jersey, accuses Compass of soliciting a team of four agents and unlawfully encouraging them to breach their existing contracts.

The agents — Maryanne Elsaesser and her team members Mathew Chapman, Rhonda Battifarano and Michele Kowal — are also named in the suit, which was filed in civil court in Bergen County, New Jersey. Christie’s accuses them of violating the terms of their contracts, improperly soliciting clients and continuing to use the firm’s confidential information.

Christie’s is seeking a temporary restraining order and permanent injunctive relief against Compass and its former agents, as well as money damages.

The suit claims Elsaesser was “the main driver of this scheme” for introducing her team to Compass strategic growth manager Adam Leshaw in March. About a month later, all four agents resigned.

It also claims the agents improperly solicited clients when they attempted to transfer listings from Christie’s to Compass on the New Jersey Multiple Listing Service, and that Elsaesser withdrew three listing agreements that were pending with Christie’s. In court documents, the firm included an email from Elsaesser where she instructed her team to “keep a log” on a deal where she spoke with a client after they’d spoken with a Christie’s agent.

According to the agents’ contracts, they are banned from attempting to hire fellow agents or company employees for a period of two years after they leave, using company information or interfering with former clients while working at Christie’s.

The firm also claimed Compass was fully aware of these terms “but nonetheless solicited [the agents],” the complaint reads. “As reflected by numerous lawsuits filed across the country, Compass has a pattern and practice of poaching.”

Compass’ recruitment strategy has led to numerous lawsuits since 2014 with accusations ranging from price-fixing and collusion to poaching tech talent to stealing $2 million worth of leads. Last month, Howard Hanna sued Compass for allegedly encouraging three of its agents in Pennsylvania to breach their contracts, specifically their non-compete, non-solicitation and confidentiality provisions, by switching brokerages.

Christie’s also alleged that its former agents took confidential information with them in the form of both listings and “pricing and pricing strategy,” which will give them the ability to “unfairly” win business from the firm’s existing and future clients.

A Compass spokesperson called the allegations “clearly opportunistic and entirely without merit.”

“Our focus remains on empowering agents to grow their business, and we believe in their right to choose the brokerage that serves them best,” the spokesperson continued in a statement.

In recent years, Compass has taken steps to defend itself against accusations of stolen data by adopting a common practice in Silicon Valley: New hires must sign an agreement that defines what agents cannot bring with them to Compass and threatens disciplinary action if they don’t comply.

Michael Hensely, an attorney representing Christie’s, said his client intends to “vigorously pursue” the matter and declined to comment further.