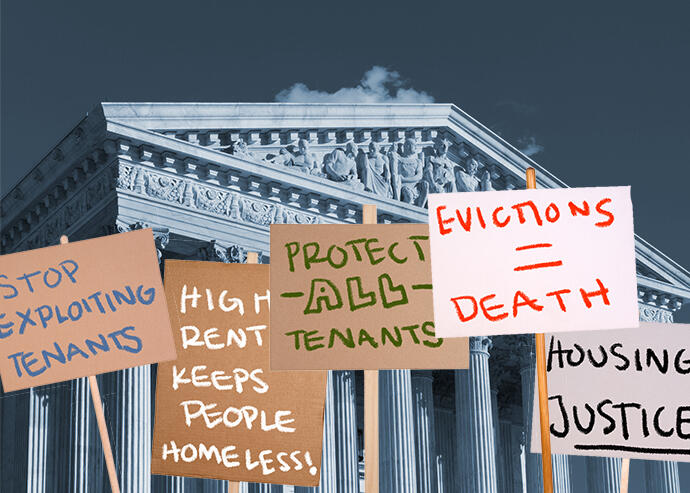 It’s been nearly two years since the New York state legislature passed the Housing Stability and Tenant Protection Act of 2019, yet five separate suits challenging the law’s constitutionality are still taking up space on court dockets.

The plaintiffs — an array of landlords, property managers and related interest groups — are banking that the suits can crawl their way to the Supreme Court, where a majority conservative bench might favor curtailing government control of property. Tenant lawyers party to each case doubt that they will make it past the appellate court.

Still, the Rent Stabilization Association and Community Housing Improvement Program filed an appeal in the Second Circuit last week and expect oral arguments to be heard in the next few months.

Here’s how we got here:

RSA and CHIP had their lawsuit locked and loaded when Gov. Andrew Cuomo signed off on the rent law in June 2019. They filed just two weeks later with an argument that would become the basis of suits to follow.

The rent law violates the U.S. Constitution’s Fifth and Fourteenth Amendments, their complaint argued. Specifically, a “takings clause” in the Fifth Amendment bars governments from seizing private property without compensating owners — the RSA suit argues that rent regulation, which targets one group to pay for the benefit of others, amounts to just that.

By largely restricting owners from refusing new leases, the law also violates the Fourteenth Amendment’s due process clause, the suit alleges, because the government can’t hinder property owners from keeping people off their property. Another violation of due process, the case claims, is that the law is arbitrary and irrational.

Four months later, a cohort of smaller landlords filed a near-carbon copy suit. Plaintiffs Dino, Dimos and Vasiliki Panagoulias — thought to be funded by larger landlord Clipper Equity — tacked on a “contracts clause” argument to the RSA and CHIP complaints. Outlined in Article 1, Section 10, the clause bars legislation that interferes with private contracts. Plaintiffs argue the rent law, which compels landlords to charge rents below the market rate until a tenant vacates, violates that provision.

The court transferred Panagoulias’ case to RSA’s judge the same month it was filed. The judge issued a notice of the suits’ similarity, sparking concerns that they might be combined.

But Andrew Pincus, the attorney representing RSA and CHIP, was adamant that the suits stayed separate, noting perceived fundamental differences between them.

District courts dismissed both suits in September — the RSA suit in its entirety and the majority of the Panagoulias’ filling, the rest of which was thrown out in February of this year.

The judge ruled in favor of legal precedence, supporting the government’s right to pass rent regulations. Both parties swiftly appealed.

A couple more suits popped up in the winter of 2019 into 2020, both fronting similar theses.

A trade association representing Westchester landlords echoed CHIP’s claims in a December 2019 filing. And a January 2020 complaint by G-Max Management parroted previous cases, but added that the 2019 laws violate the Fair Housing Act by locking minority renters out of historically majority-white neighborhoods.

Months later, two tenant advocacy groups petitioned to intervene in each of the cases. U.S. District Judge Kenneth M. Karas coupled the filings in a single opinion that allowed Community Voices Heard (CVH) to intervene on the Westchester suit and both CVH and Tenants & Neighbors to intervene in the G-Max suit, citing the intervenor’s “unique, personal and highly relevant perspective” on the 2019 rent laws.

All five cases now have tenant advocates as intervenors, according to attorneys at The Legal Aid Society, which is litigating those cases. The added parties bolster the defense.

One final filing in the rent law saga dropped a week after the G-Max suit, advancing many of the same arguments against both the city’s Rent Guidelines Board and the head of the Division of Housing and Community Renewal, a state agency that oversees rent regulation. A judge dismissed that case in March, claiming that landlords have no constitutional right to an unregulated market and that loss of profit alone doesn’t count as a regulatory seizure of property.

In the opinion, U.S. District Judge Edgardo Ramos noted the multitude of cases challenging the rent stabilization law and detailed their progress.

“The earliest-filed cases in the Eastern District of New York have been almost entirely dismissed,” Ramos wrote, adding that the Westchester and G-Max cases filed in the Southern District have motions to dismiss pending.

Though appellate arguments are pending, real estate attorneys doubt any of the cases are strong enough to break through.

“They take forever, and they never prevail,” Itkowitz said. “People have been trying to get rid of the rent laws since the 1970s and, last time I checked, they are still very much here.”

Attorneys at The Legal Aid Society echoed Itkowitz’s sentiment, noting that landlords are betting on the Supreme Court overturning “100 years of law.”.

But Pincus said the RSA and CHIP suit is not suggesting the court throw out rent control in its entirety, but rather limit the extent to which the government can regulate property use.

“Our hope is that the courts will set limits on how far rent regulation can go,” he said. “Then there would be a debate and an enactment of new laws of New York.”

The real estate industry has managed a few victories since the rent law’s passage.

In February 2020, the New York Department of State issued surprise guidance that banned landlords from charging tenants for broker fees. Trade groups immediately took the interpretation to court. The Real Estate Board of New York, the New York Association of Realtors and several major New York brokerage firms filed an article to stop enforcement of the guidance two days later. Last month, a judge in Albany ruled that the broker fee ban was an error of law and an abuse of discretion, effectively invalidating the state guidance.

Last year, an appellate court offered an additional glimmer of hope for pending rent law cases, ruling that the 2019 rent law should not apply retroactively to rent overcharge cases.

“For the first time in its history, our Court has struck down, as violative of substantive due process, a remedial statute duly enacted by the legislature,” Judge Rowan Wilson wrote in his dissenting opinion.

The decision would likely serve as a helpful foundation to lawsuits that followed, said Sherwin Belkin, principal of Belkin Burden Goldman, as the majority focused on the laws’ lack of balance, lack of legislative explanation and the “substantive injuries caused.”