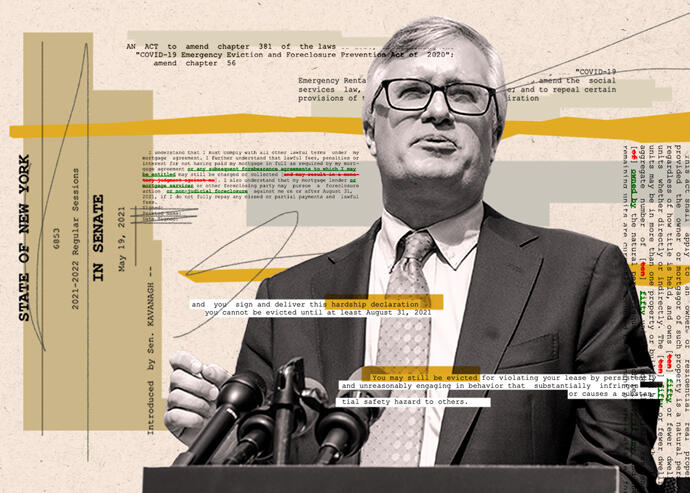 Lawmakers are seeking to tweak New York’s rent relief program to comply with new federal guidelines, but some landlords feel the changes still leave the door open to future conflicts with tenants.

Sen. Brian Kavanagh, who chairs the chamber’s Housing, Construction And Community Development Committee, introduced a bill this week that would revise the state program to match recent guidance from the Department of Treasury. The measure increases the number of months of rent arrears the program covers from 12 to 18. Payments can be dedicated to future rent for up to three of those months.

In a win for landlords, the bill also permits evictions in cases where a tenant has engaged in “nuisance” behavior — i.e., actions that cause a safety hazard or infringe on other tenants’ rights. It proposes changes to the state’s eviction and foreclosure protections, which would be extended to owners of properties with 50 or fewer apartments rather than the current 10. It would also provide foreclosure protections to certain co-ops.

The measure does not, however, address the federal guidelines’ requirement that aid be offered directly to tenants in cases where the landlord refuses to cooperate. The state rules stipulate that funds should go directly to landlords.

Kavanagh said he plans to have further conversations with federal officials and others before changing the state’s language regarding uncooperative landlords. Under New York’s program, a landlord who refuses rent aid waives their right to those funds and is barred from pursuing legal action against the tenant.

“I think it effectively relieves the tenant of the obligation and also provides protections,” he said.

Jay Martin, executive director of the Community Housing Improvement Program, worries the state might belatedly alter its program to get in line with federal guidance. And if tenants receive direct payments, they could decide to not spend that money on rent.

Without a provision addressing that possibility, cases will be left for the court to decide, he said

“Essentially, the bill is only covering one part of the equation here, which is that the government is distributing money,” Martin said. “There’s no governance on the back end”

Ellen Davidson, an attorney at the Legal Aid Society, doubts the state will need to alter its law to match federal guidelines. She said the legislature likely views the law’s baked-in tenant protections as sufficient.

“There are pretty significant consequences if the landlord fails to cooperate,” she said.

Martin also expressed concern over partial payments, which the program does not address. Last year’s rent relief program ran into snags where a landlord received only a portion of back rent owed. He worries that if similar scenarios arise with the current program, those cases would be funnelled into a backlogged court system, creating another hurdle for landlords.

New York’s rent relief program has $2.5 billion earmarked to cover tenants’ full pandemic arrears. Applications for the funds have not yet been released by the state’s Office of Temporary and Disability Assistance. The agency is expected to do so by the end of this month. Last year’s program offered $100 million, but only $47.5 million reached tenants because of strict eligibility requirements.

“That program was meant to fail,” said Davidson.