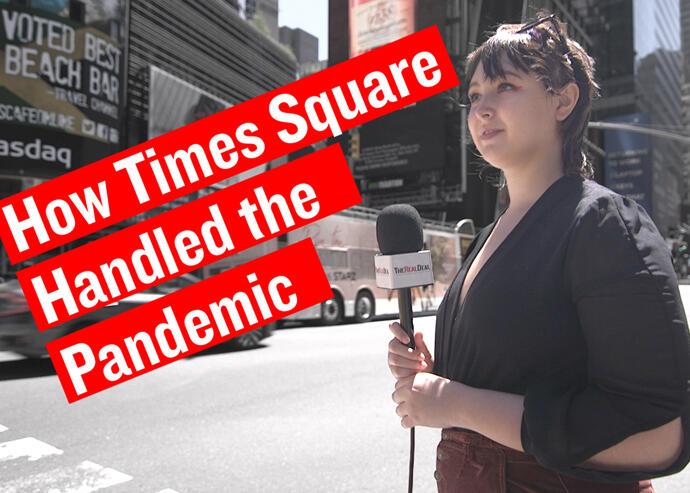 What is the future of Times Square? One Times Square was once the home of The New York Times, and today is the site of the annual New Year’s Eve ball drop. But while that iconic sphere and LED billboards keep the exterior lit throughout the year, the building’s 22 floors are dark. A three-story Walgreens on the ground floor is the only tenant, and the brand recently signed a lease at the Bow-Tie building two blocks away, making its future occupancy plans uncertain.

The property is one of the most valuable advertising locations in the world. The facade alone generates an estimated $23 million in revenue, meaning that even without tenants, the property turns a profit for its owner, Jamestown.

But it’s struggled to attract tenants, a problem that predates the pandemic. In 2017, Jamestown submitted a proposal to Manhattan Community Board 5 to update the building, including creating a Times Square museum with an observation deck. There have been few updates since, and the landlord declined to provide any more specifics.

One Times Square is one of several properties in the neighborhood that may need to shift their strategies once the pandemic is over. Times Square has seen its foot traffic drop dramatically, its rents decrease and its offices go empty. For the businesses that occupy those properties, and the landlords who own them, finding new ways to draw in customers and tenants may be the key to survival.

The corridor’s mix of retail, entertainment venues and restaurants contributes $2.5 billion in city taxes and $2.3 billion in state taxes annually, according to the Times Square Alliance.

But in 2020, as Covid-19 spread and tourists fled, foot traffic dropped dramatically. In 2019, 373,000 pedestrians visited per day; during the pandemic, that number dropped to 33,000. According to data from Visa, spending in the area in the second quarter of 2020 declined by 94 percent.

Pedestrian counts have since rebounded: 110,000 visitors came through each day as of March, but that’s still a 67 percent decline from the same month in 2019.

Some businesses closed for good during the pandemic. Buffalo Wild Wings abandoned its space at 253 West 47th Street, leaving behind a $15 million build out, and the owners of the 478-room Hilton Times Square at 234 West 42nd Street handed the keys back to their lenders. Some landlords sued nonpaying tenants; Vornado, for example, went to war against Planet Hollywood at 1540 Broadway. Some tenants — including Ellen’s Stardust Diner at 1540 Broadway, and Carmine’s, located at 200 West 44th Street — sued their landlords.

Painful as those lawsuits are, in the current retail landscape, vacancy might be worse for landlords. A TRD analysis of PropertyShark data found at least 78 vacant storefronts, with close to 6 million square feet of retail space available.

Times Square landlords would previously offer incentives like free rent during build-out to lure tenants to sign big leases. But Newmark Knight Frank vice-chairman Karen Bellantoni said that today, landlords might build out those spaces themselves, or offer alternative rent options, such as setting the rent based on a percentage of the tenant’s gross income.

“When it comes to concession packages, in turn rents will maybe increase and come back to levels that we’ve seen pre-Covid as a result,” said Tom Citron, managing director of Colliers’ New York headquarters, who orchestrated H&M’s 42,500-square-foot lease at One Five One Times Square in 2012.

Rents in the area have been declining for years; they dropped 42 percent between 2015 and 2020, according to the Real Estate Board of New York. But the pandemic exacerbated the problem. The Times Square corridor recorded a 21.5 percent year-over-year decline in average rents, from $1,647 to $1,293 per square foot, according to CBRE’s first quarter report. That’s the lowest level since 2010.

Some landlords are looking at vacancies as an opportunity.

At Five Times Square, anchor tenant Ernst & Young is moving out in 2022. Retailers at the base of the building have already vacated. But landlord RXR, which owns the 39-story tower in a joint venture with investor David Werner, is spending $50 million to renovate the property.

Bellantoni, who is marketing that retail space, didn’t seem fazed by the risk of renovating while some landlords are struggling to attract tenants.

“We don’t put the cart before the horse,” she said.

Still, you can still hear the sounds of hammers and drills above the noise of the car horns in Times Square.

Construction continues apace on the corner of 47th Street and Broadway, where L&L Holding Company’s massive new building, TSX Broadway, is on the rise. The 46-story, 550,000-square-foot tower will include retail, a theater, an outdoor stage and a 669-room hotel. Construction is due to wrap up in the fourth quarter of 2022.

TSX is one of several new developments currently on the rise in Times Square, including a new 48-story hotel at 145 West 47th Street from Spanish chain RIU; a Margaritaville resort at 560 Seventh Avenue, which is due to open in the next few months; and an enormous hotel from Sam Chang that’s coming together at 150 West 48th Street.

Together, they may herald a new era for Times Square’s tenant mix.

At TSX, the developers are considering leasing the building to a single tenant or breaking it up for several smaller occupants. But the retail space and signage were designed as an immersive environment for shoppers, where they can interact with the brands leasing the space.

In March 2020, television cameras showcased a desolate Times Square, a symbol of the pandemic’s power.

But signs of life have returned to the area. During recent visits in April and May, The Real Deal found tourists snapping pictures with the notorious Elmos and the Naked Cowboy.

According to the Times Square Alliance, 18 new brick-and-mortar stores have opened in the area during the pandemic. Some, like Taco Bell Cantina, are new takes on old brands. Others, like Jollibee, are big-name international companies, but relatively new to the area. Jollibee has just two other locations in the city.

And while many companies are still figuring out their return-to-office plans, some tenants have signed big leases. Those include pharmaceutical software developer Schrödinger Inc., taking up nearly 109,000 square feet at Edge Fund Advisors’ 1540 Broadway, and TikTok, with 232,000 square feet at the Durst Organization’s One Five One.

But new leases and retailers aren’t enough; Times Square needs tourists to survive. Though lifted restrictions surrounding capacity and mask-wearing, along with Broadway’s reopening, have been helpful, it will take time for the crowds to return. NYC & Company estimated that domestic travel would be back to the 2019 baseline by 2023. For international travel, it will take until 2025.

By then, Times Square may look different. But for the area that generates 7 percent of the city’s jobs and 15 percent of total economic output, survival is the only option.

“We are always reinventing and moving into our new reality,” said Tom Harris, acting president and COO of the Times Square Alliance. “We’re good at it, [and] we’re going to do it this time.”