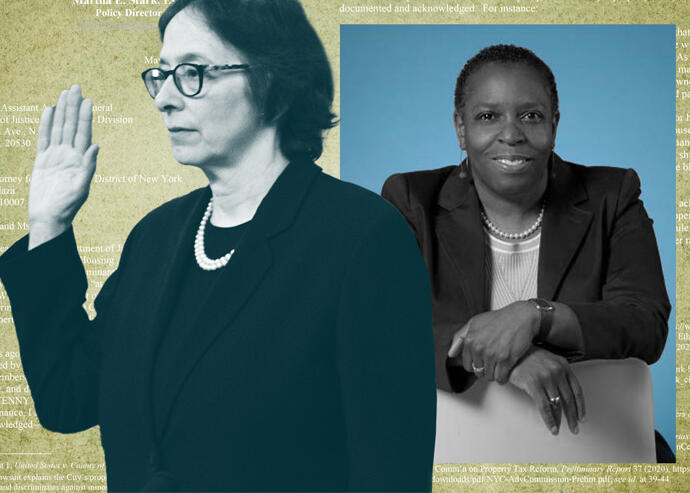 After more than a year of frustrated efforts in the state court system, Tax Equity Now New York’s latest attempt at property tax reform is an appeal to the federal government.

In a letter sent Thursday, the coalition implored the Department of Justice to challenge the city’s tax structure under the Fair Housing Act.

The plea comes eight months after the New York Court of Appeals tossed out a TENNY suit challenging the constitutionality of the city’s property tax laws, citing a lack of a “substantial constitutional question.”

At the time, a TENNY spokesperson vowed that the group would continue fighting in state court. But since then, reform has gained some renewed attention at the local level.

In February, Mayor Bill de Blasio pledged to revive his administration’s efforts to address property tax reform more than a year after releasing a series of recommendations as part of a preliminary report on the topic, blaming delays on the pandemic. Public hearings finally resumed this month.

Communities of color, Stark argued, are taxed at higher rates than majority-white areas as a result of a “dizzying array of valuation methods, caps, adjustments, abatements, and other features.”

Will the Department of Justice answer the call? Stark is reluctant to predict the future.

“I’ve given up my betting life,” she told The Real Deal.

But a new White House administration could be of help.

President Biden specifically addressed the topic in a January memorandum on discriminatory housing practices, calling out the “persistent undervaluation of properties owned by families of color” and committing to reexamine the Trump administration’s repeal of an Obama-era rule that compelled local municipalities to take steps to rectify barriers to fair housing.

There’s also precedent for the case, which Stark outlined in the letter. In 2000, the Justice Department challenged Nassau County’s property tax laws on the basis that higher rates in Black and Latino neighborhoods violated the Fair Housing Act.

Stark said she’d be satisfied with a similar outcome to the intervention in Nassau County — which was settled when the county agreed to abide by DOJ recommendations — provided the DOJ outlined aspects of the city’s property tax law that conflict with the FHA.

“We need judicial intervention to actually get these changes made,” Stark said. “The legislature has had ample opportunity to make them and they have not.”

After restarting public hearings with the city’s commission on property tax reform this month, the de Blasio administration intends to use the findings to issue a second report by the end of the year, coinciding with the end of his term.

But any changes to the law would need to go through the legislature, and it’s unlikely lawmakers would take up new proposals before a new mayor comes in, Stark said.

The hearings are also occurring in the final weeks before the city’s mayoral primary election, which Stark believes will steal a good bit of their limelight.

“But you know, they’re scheduled, and I do think the commission is interested in what the public has to say,” she added.

A virtual hearing for Staten Island was held on May 11. Brooklyn’s hearing is up next, on Thursday, May 27.