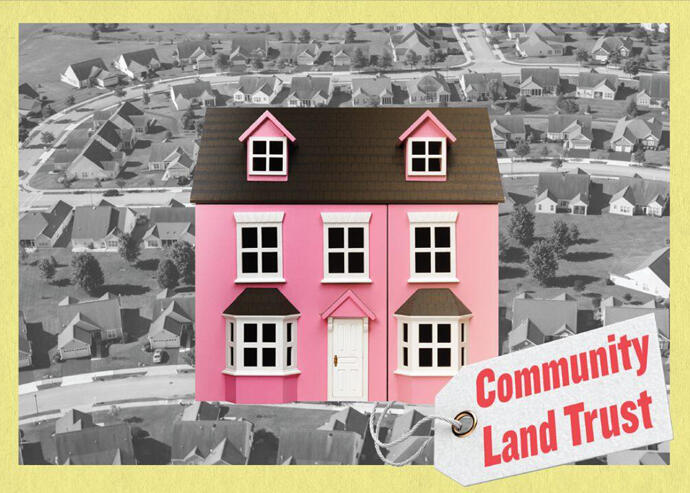 When Shaya Schreiber started searching for a home in Madison, Wisconsin, her options were limited.

Student loans made the single mother of two ineligible for certain affordable housing and a market-rate home was beyond her reach. Then she found the Madison Area Community Land Trust.

The trust helped her purchase a three-bedroom house on the west side of the city. The organization paid $160,000 for the home and more for necessary improvements. Then Schreiber bought it from the trust for $135,000.

“I wouldn’t have been able to afford a house otherwise,” she said.

Community land trusts are a form of social housing where a nonprofit controls the land through a long-term ground lease and sells the home to low- to moderate-income buyers at a discount. Such arrangements often limit the value of the homes on resale, to ensure permanent affordability.

The idea of social housing is not new, but in recent years it has gained momentum in policy discussions. In fact, community land trusts and other shared-equity models were part of several presidential candidates’ platforms during the 2020 election and are being floated as part of federal and local pandemic recovery legislation.

Another social housing model, limited-equity co-ops, also limit homeowner equity, though restrictions on resale tend to end when the mortgage does. In Schreiber’s case, if she were to sell, her profit could be no more than 25 percent of the increase in the home’s assessed value. She isn’t bothered by that bargain.

“My home will stay affordable for 99 years,” she said, referring to the ground lease. “There’s a huge need for affordable housing and homeownership in Madison. I like being part of the solution.”

Scaling up these models, however, is a task riddled with challenges. Funding for land acquisition and construction costs is limited. There is resistance to the idea of limiting homeowners’ gains, especially among people of color who have historically been closed out of homeownership. And while politicians have voiced support for the model, housing agencies are sometimes reluctant to change their ways.

As Karen Haycox, CEO of the New York City chapter of Habitat for Humanity, put it: “It takes time to turn an ocean freighter around.”

When the Houston Community Land Trust launched in 2018, the founders were mindful of how it would be perceived.

“We did not want the negative stigma that goes along with multifamily,” said Ashley Allen, executive director of the nonprofit. As a result, it has focused on single-family homes, hoping to change the perception of what affordable housing can be. Eventually the land trust, which has 35 homes but expects to have 400 by 2023, will include multifamily properties, she said.

Though land trusts and limited-equity co-ops are popularly referred to as social housing, they don’t quite live up to the classification. The land trust model does not realize the socialist view of housing as a human right: People still need to pay for it. Certain versions of limited-equity co-ops have a sunset date, at which point they turn market-rate.

Fully decommodifying housing in the U.S. would require a societal reprogramming. Even getting community members and elected officials comfortable with the concept of land trusts — curbing home appreciation, the primary way families build wealth — is not easy. And other versions of social housing have a lackluster track record.

Public housing, the oldest form of housing subsidy in the U.S., has been plagued by decades of disinvestment and crime. Limited equity co-ops started as affordable housing for union workers and took off in the 1950s, 60s and 70s, fueled by federal housing programs and urban renewal funds. In New York, this took the form of Housing Development Fund Corporation and Mitchell-Lama co-ops, which restrict the incomes of buyers and resale prices, though the latter allows owners to opt out after 20 years.

According to the National Co-op Research Project, as of the end of 2016, there were only 166,608 shared-equity co-ops in the U.S., more than half of which were in New York. The model fell out of favor as funding dried up and some co-ops were mismanaged. However, like land trusts, limited equity co-ops have seen a resurgence of interest in recent years.

Community land trusts began during the Civil Rights movement as a way to create economic opportunity for Black farmers. The first in the U.S. was formed in 1969 as a 6,000-acre farm collective in Lee County, Georgia. Half a century later, they remain rare — somewhere north of 225 nationwide, according to the Grounded Solutions Network. The average one has 50 units. Their impact on housing affordability in America, statistically at least, is essentially zero.

Allen said criticism of the restrictions on equity building usually comes from those who don’t need a land trust to become a homeowner.

“Those are people who can afford to ride the market,” she said.

Rosalind Greenstein, an urban planning and policy expert at Tufts University, said the concern should be contemplated but not used to discredit the model.

“The CLT model says you have a right to housing,” she said, “not a real estate windfall.”

Amanda Rhein was hired in 2018 to reboot the Atlanta Land Trust. The nonprofit was launched in 2009 but struggled as the recession decimated the city’s community development corporations — another type of nonprofit that has access to community block grants and often partners with land trusts.

The Atlanta trust is now citywide but focuses on southwest neighborhoods along the beltline, where the city is seeing the most gentrification, she said. It acquires properties through the Metro Atlanta Land Bank, donations, public entities and by purchasing single-family homes scattered throughout the city.

Even in cases where the land trust is gifted property, construction costs can be a major hurdle.

“We really are just one of a plethora of solutions that need to be implemented in concert to address affordability in Atlanta,” Rhein said.

Because land trusts limit home values, they typically cannot outbid the private market for property. Instead, they depend on donated or government-owned properties. Some land trusts have contemplated adding properties subject to tax lien sales or reaching out to homeowners facing foreclosure. A number have successfully done so, but Rhein said it is relatively rare.

Land trusts have to tread lightly: To swoop in and buy from distressed owners can sow distrust, and identifying those meeting the land trust’s requirements is difficult.

Organizations rely heavily on foundation funds and grants, and except for some Fannie Mae options, private-sector financing is largely limited to portfolio loans.

The land trust in Madison, Williams said, has been “understaffed and under-resourced almost our whole existence.” It no longer does buyer-initiated deals, which is how Schreiber found her home. City officials prefer that the land trust first select the property and then the buyer to prevent its homeowners from being so scattered.

Williams said although there has been rhetorical support for the model, she said she believes City Council members and others generally don’t understand how land trusts work.

“They are not looking at our budget,” she said. “I think there is an idea that these other affordable housing developers are self-sufficient, so why can’t you be? Just figure it out.”

Not all land trusts only do housing. In Mississippi, Cooperation Jackson purchased government- and private-owned property in the West Jackson neighborhood with a community center as its focal point. It plans to transform these properties into housing cooperatives and commercial buildings. The guiding principle is putting “control in the hands of a community to decide what it wants to develop on its collective land.”

James DeFilippis, a professor at Rutgers University’s School of Planning and Public Policy, co-authored a paper in 2017 that criticized the direction of land trusts, arguing that they have come to be seen as an affordable-housing tool, when in fact their core mission is to put control of a community’s development in the hands of its residents. He said he has seen some focus shift back to that.

DeFilippis co-founded the Western Queens Community Land Trust in 2019. The organization is negotiating to acquire a building owned by New York City’s Department of Education in Long Island City. The land trust aims to use the property — part of the site where Amazon once planned a new headquarters — for affordable manufacturing space, a commissary, a food co-op, artists’ studios and other uses.

“That kind of bottom-tier manufactured space is very quickly gentrified away,” he said.

New York has a handful of other fledgling land trusts, including the East Harlem El Barrio Community Land Trust, which received $13 million in city funding in March to acquire and renovate its first four buildings. Modeled on the city’s oldest land trust, Cooper Square, it will have 36 rental units and three commercial spaces.

The city’s 2020 budget included $850,000 to help grow a network of community land trusts, and Mayor Bill de Blasio has pledged enough city land for 3,000 units under the model. These are fractional amounts in the context of a $90 billion budget and the mayor’s goal of creating or preserving 300,000 affordable units, but they were cheered by advocates as promising gains.

Habitat for Humanity just completed a 56-unit co-op in Williamsbridge for low- to moderate-income buyers as the first project under the city’s Open Door program, a limited-equity model for condos and co-ops that restrict resales for 40 years. Habitat’s Haycox sees the combination of these co-ops with land trusts, as well as the  conversions of rentals to limited-equity homeownership, as natural next steps for her organization.

In addition to long-term government commitments to fund shared-equity models, Keren Horn, a professor of economics at the University of Massachusetts–Boston, said changes to existing affordable housing programs could pave the way for shared-equity models of housing to grow. She suggested making Section 8 housing vouchers an entitlement, rather than award them by lottery, which could serve as a stepping stone to land trusts.

Given social housing’s history in the U.S. and the obstacles it faces, it is far from certain that the conversation now underway will turn into meaningful gains on the ground. But Greenstein said the pandemic has underscored the urgency of figuring out ways to address housing needs.

“Getting social housing models, or getting people to accept social housing as part of government actions, has always been a struggle,” she said. “I think there is more understanding across sectors that we need to house people.”