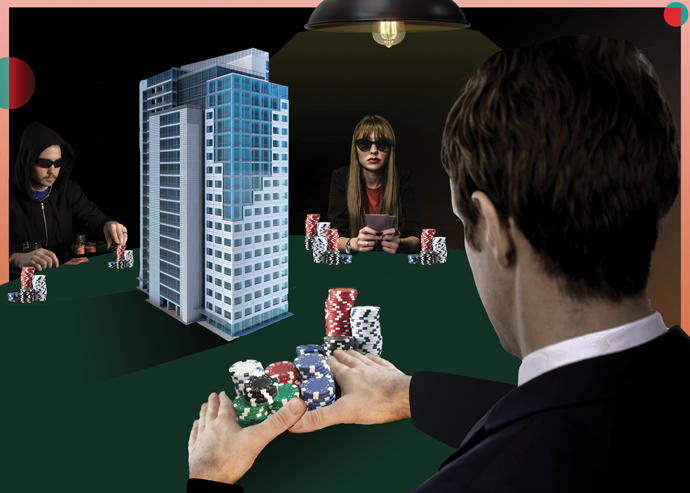 This office redeveloper is going all in (Photo illustration by The Real Deal)

It was hard to miss the dozens of hardhats on lunch break as they poured out of a 20-story office building on Manhattan’s Far West Side. Some ducked into nearby shops, while others lined up at street vendors for chicken and rice.

The construction crew has been working to overhaul the 636,000-square-foot property just across from Hudson Yards, a job that will transform the nearly century-old building into a Class A office tower.

When 601W Companies closed on the Amazon-anchored building at 410 10th Avenue for $952.5 million in December, it was the second biggest investment sale in the city’s pandemic-ravaged market in 2020. And it was a perfect illustration of 601W’s playbook.

Besides having a penchant for trophy office properties, the Manhattan-based investment firm, led by founder Mark Karasick and fellow managing members Michael Silberberg and Victor Gerstein, is entrenched in the redevelopment business. It acquires massive but often aging or neglected office buildings, and spends millions to redevelop them before boosting occupancy — or rebranding for a new tenant roster — and eventually selling at a high return.

But 601W’s ambitious strategy is being tested, as both New York and Chicago — another city where it is heavily invested — continue to get decimated by the pandemic, with offices emptied out and tenants trimming space.

Despite owning prime properties across the country, some high-wattage tenants — Uber included — and expansive redevelopment projects, 601W and especially its founder have for years maintained a low profile. But the 410 10th buy, for which it secured a $705 million acquisition loan from JPMorgan Chase, thrust it into the spotlight.

The company “had to rise above the kings of the industry to win this,” said Darcy Stacom, who heads CBRE’s New York capital markets group and respresented seller SL Green Realty in the deal for the tower.

Over the last 25 years, 601W has amassed 45 million square feet of office properties in its portfolio, worth over $12 billion. Its current holdings outside of Chicago and New York include massive properties like the 2.3 million-square-foot U.S. Steel Tower in Pittsburgh, along with a 650,000-square-foot former office complex at 4000 Connecticut Avenue in Washington, D.C., that was converted into a private school.

Besides the 410 10th redevelopment, the company is overhauling a 592,000-square-foot building at 801 South Canal Street in Chicago after buying it for $68 million last February. The property is just south of the 2.5 million-square-foot Old Post Office, which 601W acquired for $130 million in 2016. It plowed more than $800 million into redeveloping and modernizing that hulking complex, including installing a new 3.5-acre rooftop park.

601W’s moves come at a perilous time for the industry, though one some investors see as ripe for opportunity. Manhattan’s office availability hit 14.3 percent in the fourth quarter of 2020, the highest quarterly mark on record, according to Colliers International.

Chicago’s downtown office market has also seen vacancy soar. Its rate stood at 14.2 percent in the fourth quarter, which doesn’t include the 5.4 million square feet of sublet inventory — the highest on record — according to the local commercial brokerage MB Real Estate.

While Covid vaccine distribution brings renewed optimism, the work-from-home environment is now entrenched, meaning finding new tenants will be a struggle in the coming months.

But Stacom, who has been one of the city’s top commercial dealmakers for years, said 601W’s willingness to pay nearly $1 billion for the SL Green building almost a year into the pandemic proves it is already looking past the crisis.

From its inception, 601W has played the long game.

In 1998, Karasick and his investment partners, under the name 601 West Associates, bought the sprawling Starrett-Lehigh Building at 601 West 26th Street in New York from Helmsley Enterprises for $152 million. The 2.3 million-square-foot manufacturing building — which became the company’s namesake — was already a designated landmark but had been poorly run, and was 50 percent vacant at the time of acquisition.

To attract new tenants, Karasick invested about $22 million in upgrades, the New York Times reported. 601W eventually brought in high-paying tenants like Martha Stewart Living, Omnimedia and Hugo Boss, but 12 former tenants, feeling the landlord was harassing them to force them out, sued the firm.

Karasick denied trying to kick the tenants out, and in an interview with the Times downplayed the lawsuit in a building with nearly 200 tenants total.

Karasick and other representatives at 601W did not respond to requests for comment for this article. The company lists Karasick as a graduate of Yeshiva University and several of its graduate schools — including the Bernard Revel Graduate School of Jewish Studies.

After successfully stabilizing the Starrett-Lehigh Building and rebranding it as a “new media and technology center,” 601W sold the trophy asset to Scott Rechler’s RXR Realty for $950 million in 2011. Pocketing more than six times the purchase price, 601W still touts that deal on its website.

The firm’s track record with Starrett-Lehigh was appealing to Chicago city officials when the company reached out in 2016 about purchasing the Old Post Office building. The similarities between the two projects stood out as the administration of then-Mayor Rahm Emanuel probed 601W as a prospective buyer, said David Reifman, at the time Chicago’s planning chief.

The city was in the process of condemning the dilapidated former post office, which had sat vacant along the Chicago River for nearly two decades. But the city halted that process after 601W guaranteed a quick closing on the $130 million deal with the seller, British property mogul Bill Davies. The firm kept its word and moved forward with the redevelopment after the purchase, Reifman said.

That part of downtown wasn’t considered an office district, but the city saw potential because of its proximity to transit, and 601W shared the same vision, Reifman said.

“It’s really a very interesting market that needed something like the Old Post Office to breathe new life,” he added.

But vision alone wouldn’t have revived the 12-story Art Deco building, said Lisa Davidson, a Savills broker who was part of the team representing the Old Post Office seller.

“They really did have a lot of foresight. And so I definitely give them credit for that,” she said, referring to the 601W team. “But I think, sometimes in life, timing is everything.” Davies — who paid $24 million for the building at a 2009 auction — had rejected multiple offers over the years from other developers. Because Davies wanted to be involved in the project as a co-owner, those proposals ultimately fell apart, Davidson recalled.

By the time 601W started to negotiate with Davies, however, he was ill and in the hospital.

“He was finally willing to let go of the idea of being involved in the property,” making it possible for 601W to move forward with the deal, Davidson said.

The firm spent more than $800 million to transform the Old Post Office into a modern office building, securing a $500 million construction loan in late 2017 from JPMorgan and Blackstone Group. JPMorgan also provided a $611 million refinance in October 2019, just before the building opened, Crain’s reported. 601W has secured long-term leases with Uber, Walgreens, PepsiCo, the Chicago Board Options Exchange and Cisco. As of its June 2019 rent roll, the property had 1.9 million square feet leased.

All of that had an unintended effect for the press-averse firm. 601W increased its “profile here in Chicago by doing a building like the Old Post Office,” Reifman said.

But the Old Post Office wasn’t even 601W’s biggest purchase in Chicago. The year before, it paid $712 million for the 83-story Aon Center. In late 2018, it was approved for its $185 million overhaul of the skyscraper, including plans for an observation deck “thrill ride” that would dangle passengers over the roof.

For a potential new tenant that had a lease expiring in 24 months at its current location, 601W has worked to bring it in, Serot said. The company will “structure a deal to get them out of their existing lease across the street and into a 601 West Companies building,” providing necessary tenant improvements along with a portion of free rent, he added.

601W, which is now one of Chicago’s largest office landlords — it owns seven office buildings and a total of 9.4 million square feet — is “being a little bit more proactive and creative than maybe some owners I’ve seen in town,” he said.

At the Old Post Office, leasing was brisk, and the behemoth was about 80 percent leased when first tenants started to move in by fall of 2019. In February 2020, Walgreens relocated about 1,800 employees to its new 203,000-square-foot digs.

But then the pandemic hit and offices emptied out. With companies trimming leases and even exiting them entirely across the city, 601W began offering different options. One, called the Pony Express, allows tenants to rent a smaller, plug-and-play space for a short term while having access to the common amenities, similar to a co-working model.

“This is a strategic answer to some of the challenges posed by Covid and accelerates an already-existing trend of making it easier and faster for tenants to occupy spaces,” said Cailin Rogers, spokesperson for the Telos Group. The Chicago-based leasing and consulting firm handles 601W properties.

Meanwhile, a total makeover at 801 South Canal — dubbed Canal Station — has recently begun, said Telos broker Matt Whipple. 601W’s six-story property, built in 1990 for Northern Trust, will reopen as a multi-tenant boutique office building that meets tenants’ needs in a post-Covid era, he said. Work is set to be completed late this year or early in 2022.

“We think the timing of this redevelopment is actually really positive,” Whipple said