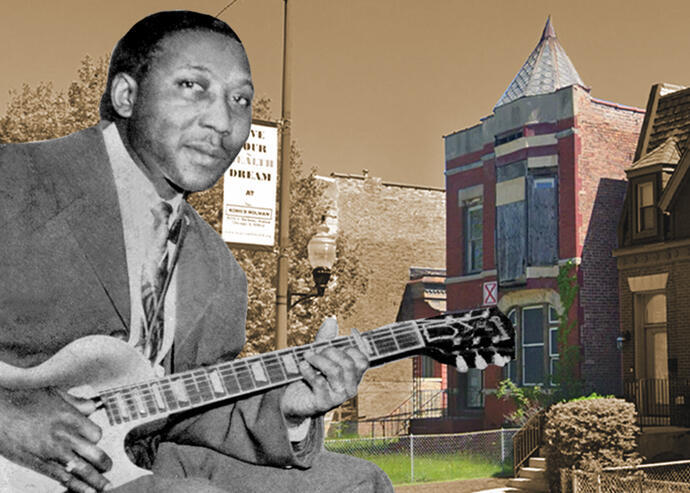 Muddy Waters mojo may get his Chicago home landmarked Preservationists are pushing to landmark a Chicago home legend blues singer Muddy Waters bought in the 1950s, near the height of his fame.

The group includes city officials and a Waters descendent who owns the North Kenwood home that has fallen into disrepair, according to Crain’s. Local Alderman Sofia King plans to host a virtual community meeting on the proposal in early June, in hopes of getting the proposal to the City Council sometime this year.

The home at 4339 S. Lake Park Avenue — called a two-flat — is vacant and has seen better days. Waters’ great-granddaughter Chandra Cooper owns the property. She is raising funds to turn it into the Muddy Waters Mojo Museum; “Got My Mojo Workin’” was one of the singer’s best-known songs.

Waters, whose real name was McKinley Morganfield, was born in Mississippi sometime between 1913 and 1915 — dates differ. He spent the first few decades of his life there before moving to Chicago in the early 1940s.

He bought the Lake Park Avenue home in 1954 near the height of his fame, and lived there for about 20 years, according to Crain’s. The property passed onto family members after he died in 1983, and has been with the family since.

The National Trust for Historic Preservation and Landmarks Illinois have awarded grants toward restoring the property. If landmarked, it would be the second home of a prominent Black historical figure to be designated in the city this year. In January, the Woodlawn building where Emmitt Till once lived, at 6427 S. St. Lawrence Avenue, was landmarked. Till’s 1955 murder in Mississippi at the hands of two white men was a catalyst for the civil rights movement.