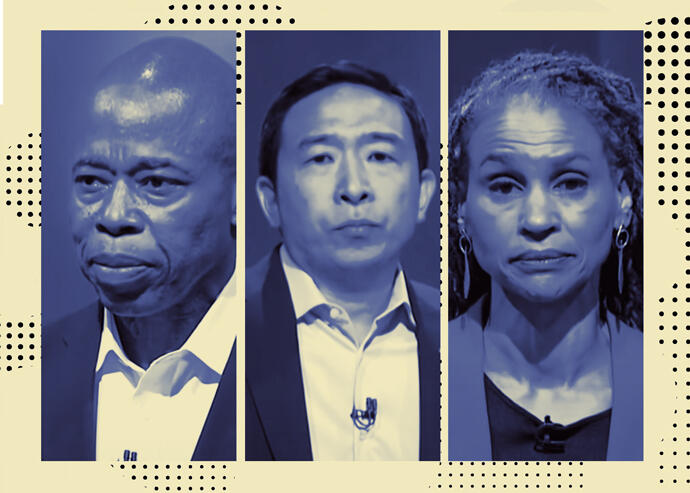 During the final mayoral debate on Wednesday, candidates were asked if they support requiring owners to retrofit their properties to cut down on greenhouse gas emissions.

The answer, unanimously, was no.

“Can we finance it?” Andrew Yang asked in reply.

“We need PACE, we need other investments to partner with building owners to make this real,” Shaun Donovan said, referring to the newly implemented financing program intended to make emissions-reducing building upgrades more affordable to owners.

Comptroller Scott Stringer, a vocal advocate of the law, tentatively raised his hand a couple of times as if to show support for the mandate, but ultimately didn’t weigh in.

The answers were likely encouraging to those in the real estate industry who have argued that the law unfairly penalizes buildings that have little chance of meeting the emission caps, even with retrofits.

“We have already suggested several changes that the next mayor and City Council must implement to improve this law and it is clear that mayoral candidates are hearing that crucial message from homeowners across the city,” said Stuart Saft, chair of the Council of New York Cooperatives and Condominiums, a group that is pushing for a tax break for condo and co-op owners who need assistance complying with the law, among other changes.

The Durst Organization’sJordan Barowitzfound the candidates’ answers “reassuring” because “they understand that the architecture of the bill is flawed because it punishes density.” He and others have criticized the measure for failing to take into account the energy efficiency of high-density buildings relative to their heavy occupancy and round-the-clock use.

Many of the candidates have previously pledged to adhere to the goals laid out by Local Law 97. In fact, Yang has pledged to accelerate the reductions, aiming for a 50 percent reduction in citywide emissions by 2030, rather than the law’s goal of 40 percent.

A roundup of the candidates’ stances on climate change compiled by The City indicates that Dianne Morales, former CEO of Phipps Neighborhoods, feels the law is “solid as is.” Kathryn Garcia, Eric Adams, Maya Wiley, Ray McGuire, Yang, Donovan and Stringer told the website that the next mayor should prioritize helping owners finance such upgrades.

Peter Sikora, director of climate and inequality campaigns at New York Communities for Change — a group that has campaigned against proposed workarounds to Local Law 97 — said he believes the candidates misunderstood the question at the debate. He expressed disappointment that the question was left until the lightning round portion of the debat.

“The way it was phrased was strange, out of context, almost hostile,” he said.

He also pointed out that Stringer, Donovan, Wiley and Yang had signed onto his organization’s “Green New Deal” pledge to fund and enforce Local Law 97 and to bar gas hookups in new construction and major renovations.

On Thursday, Morales said she supported Local Law 97 but took issue with how the question was phrased, saying it lacked “qualifiers.” She said the timeframe for the rollout of the law is fine, but the city should look at how big buildings are defined and whether aid should be provided to owners to help with compliance.

She similarly supports a ban on gas and oil hookups, but thinks the city needs to study how small building owners would be affected. Other candidates during the debate agreed that such a ban should be phased in.

A bill prohibiting fossil fuel hookups in new buildings or gut renovations was introduced last month. The ban would kick in two years after passage, years ahead of the de Blasio administration’s goal of banning the use of gas and oil by 2030.

James Whelan, president of the Real Estate Board of New York, said achieving the goals under Local Law 97 are “vital.”

“It is increasingly clear, however, that this law will need to be changed if we are to reach those shared goals,” he said in a statement. “Given this administration’s failure to meaningfully reduce carbon emissions during its tenure, the next administration must meet this challenge by fixing the fundamental flaws in Local Law 97 and actually securing the carbon reductions we need.”