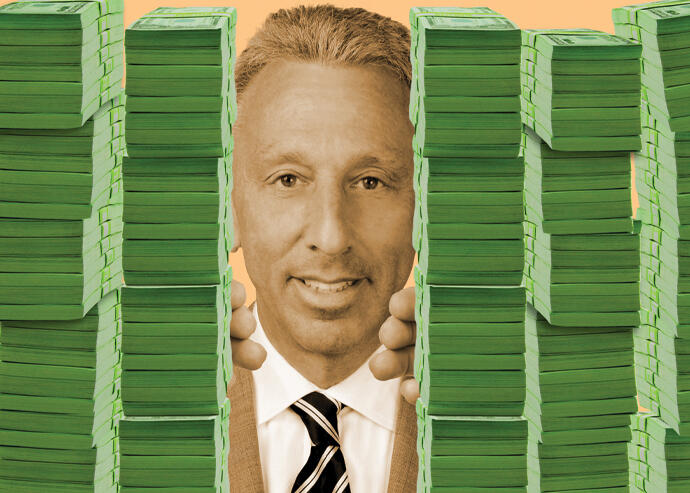 What to do with $850 million? That’s the question Newmark is now asking itself.

By virtue of some Wall Street wheeling and dealing, the commercial brokerage is set to receive a windfall in the form of hundreds of millions of dollars’ worth of shares in Nasdaq Incorporated — the financial services firm that operates the eponymous stock exchange where Newmark went public in 2017.

The hefty payout will fill Newmark’s coffers at a particularly pivotal time, when it’s got major financial decisions to make. The company is deciding on a trio of options, providing a peek into its potential strategy.

For one, Newmark has a long-running problem with awarding too much stock, which has dragged down its stock price. The cash infusion could go a long way toward buying back stock and reducing the number of outstanding shares.

Newmark also drew down heavily on its corporate credit line during the pandemic and observers expect the brokerage to pay down some of that debt.

And with the economy revving back up, Newmark may also be in the market to expand its business, making big-ticket acquisitions another possibility. Like other commercial brokerages, Newmark struggled in 2020 because of the pandemic, with income falling by more than one-third year-over-year. But the company reported promising gains at the start of this year.

Company executives have said that all three are priorities and observers are watching to see where Newmark makes a big splash.

In a May earnings call, CEO Barry Gosin said the Nasdaq money “gives us an opportunity to focus on our core objectives: buying back shares, paying down our debt and focusing on those mature markets that we grow.” He added: “We’re in a good position and we are extremely optimistic about the rest of the year.”

The Nasdaq payment comes from the days when Newmark was a subsidiary of Wall Street dealmaker Howard Lutnick’s BGC Partners.

Lutnick’s financial firm — which owned Newmark from 2011 to 2017 — struck a deal in 2013 to sell an electronic Treasuries trading platform called eSpeed to Nasdaq in a deal valued at $1.23 billion.

The sale was structured as a cash-and-stock transaction, with Nasdaq agreeing to pay $750 million up front in cash and the rest in its own stock: about 1 million shares a year over the next 15 years.

When BGC spun Newmark out in 2017, it seeded the newly public brokerage with the Nasdaq shares, giving it a steady income stream through 2027. Newmark had baked those payments in over that timeline, but in February Nasdaq reached an agreement to sell the trading platform to another financial services company.

That sale triggered a provision in the 2013 agreement that accelerated Nasdaq’s stock payments, resulting in Newmark receiving a lump payment of some 6.2 million shares this year.

One of the glaring issues Newmark can address with its newly fattened checkbook is its diluted stock.

Newmark pays its brokers a portion of their commission with company equity. As the firm has grown over the past several years, so have its outstanding shares. That’s resulted in a decline in earnings per share — a key financial metric Wall Street  looks at when pricing a company’s stock.

Until recently, the company could do little but sit by and watch as the stock price suffered due to the diluted share count.  As part of the late-2017 spinout, Newmark was barred from buying back stock in any material way for a period of three years in order to shield BGC shareholders from suffering a big tax hit from the spinoff.

But when the lockout period ended in 2020, Newmark formed a plan to buy back shares and reduce the count, and with the Nasdaq payment, many believe the brokerage will get aggressive with buybacks.

“EPS dilution has been a real issue,” Piper Sandler analyst Alex Goldfarb said. “It’s something they have been doing a good job of addressing, but clearly they know they need to do more. They have a few years to get this right, and I think they’re taking the right steps.”

Newmark has also said it will use some of the money to pay down debt.

The company entered the pandemic with a healthy level of debt, but it borrowed heavily on a corporate revolver and increased its leverage ratio as earnings declined, according to Fitch Ratings. The company said it will use some of the Nasdaq cash to pay down the remaining $140 million outstanding on the credit line.

With the debt reduction and expectations that earnings will grow with the economic recovery, Newmark should be in a good position leverage-wise, said Fitch analyst Kevin McNeil.

“The priority is to achieve a normalized operating-margin profile,” he said. “It looks like people are going to be returning to New York, and in terms of the commercial real estate brokerage business, we expect that will normalize over time.”

And the company can use some of the Nasdaq money to invest in its business.

Newmark has grown over the years through mergers and acquisitions, like its tie-up with multifamily mortgage lender Berkeley Point Financial in 2017, its purchase of the retail brokerage RKF  the following year and its acquisition of Knotel out of bankruptcy this year.

For now, executives are avoiding spelling out how they’ll spend all $850 million of the Nasdaq payment. The company did not respond to calls for comment.

But one issue that could complicate matters is their rebounding stock price.

Newmark’s stock is trading at about $13 per share, recovering virtually all of the ground lost during the pandemic. If the stock continues to climb, Newmark execs could argue that the stock is too expensive to buy and the money could be better spent elsewhere.

“The driving factor here is that the stock is up a lot,” said Wedbush Securities analyst Henry Coffey. “When your stock is doing this well, a buyback is not as black and white.”