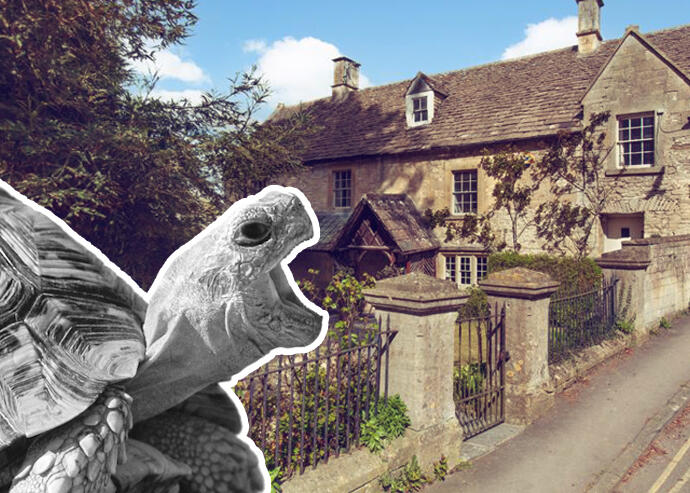 This house sale is no shell game If a stone cottage in a country town outside Bath, England, isn’t charming enough, this listing also comes with its own tortoise-in-residence.

Hercules, who is 94 years old, patrols the grounds of “the Old Dairy” ever so slowly, spending most of her time munching on veggies in the garden.

She is included in the $1.1 million purchase price of the 2,600-square-foot home in the village of Box, according to a report in the Spaces.

Hercules has outlasted two sets of owners of the property, considered Grade II-listed under England’s preservation department. She’s also become something of a local celebrity.

Hercules is fairly low maintenance — the tortoise hibernates from October through April and spends the warmer months meandering through the yard, eating cucumbers and salad leaves, according to the report.

The house spans three floors. The first floor includes the usual common spaces along with a study and conservatory room. The second floor has three bedrooms and the third floor has the main suite.

There is also a separate double garage that was converted into and formerly operated as a café. The garden where Hercules frequents is tucked behind hedging at the rear of the property. There is also a garden on the site of the home.