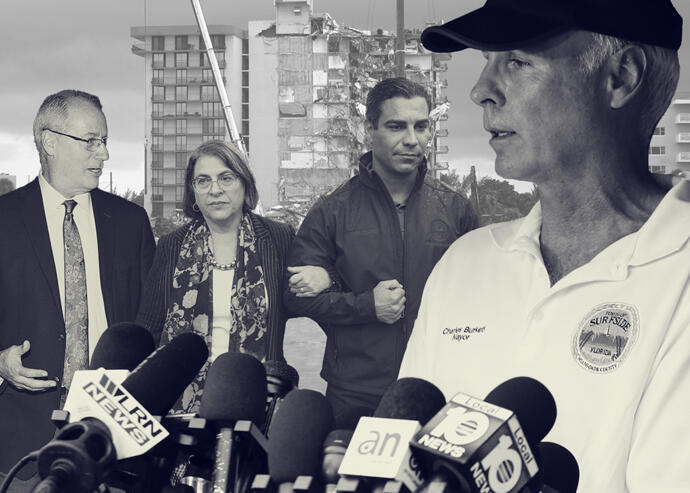 Miami-Dade County, Miami and Miami Beach are reviewing older buildings in the wake of the Surfside condo collapse that left residents concerned for their safety.

Champlain Towers South, a 12-story, 136-unit oceanfront condo, partially collapsed last week, killing at least 11 people and trapping more than 150. The building was in the midst of its 40-year recertification, a required process in Miami-Dade and Broward counties that brings aging buildings up to code.

Miami-Dade County Mayor Daniella Levine Cava directed the department of regulatory and economic resources to do a 30-day audit of residential properties five stories and taller at the 40-year recertification point “that have not completed the process to identify and address any issues.”

The directive does not affect individual municipalities, but she said she urged them “to do their own aggressive review” and vowed that the county would provide assistance.

The department identified 469 multifamily and condominium properties – including 24 at least four stories tall – that have either failed to submit recertification reports to the county or have not corrected deficiencies outlined in reports, according to an email from a department spokesperson. The county is prioritizing walk-throughs of the 24 properties, but also is reviewing the remaining buildings.

The county also is examining 318 properties – 17 of which are at least four stories – that are in various stages of the recertification process.

Meanwhile, the city of Miami Beach is sending structural engineers to all buildings in the 40-year recertification process, according to the city’s spokesperson. There are slightly more than 500 buildings currently undergoing recertification.

The city of Miami is also embarking on an examination of buildings that are six stories or taller and at least 40 years old.

A draft city of Miami letter “strongly urged” buildings to retain licensed engineers to inspect for visible distress. Associations then are to provide a letter to the city in 45 days, detailing whether distress signs were seen and, if so, the permit number for repairs.

Levine Cava also indicated buildings by the Champlain Towers South developer or contractor built in the same time period will be examined. This also will focus on unincorporated areas.

“We are dependent on the data collected at the time the permit application was submitted, which may or may not have necessitated reporting of the developer’s information,” the department spokesperson said via email. Levine Cava added that the county will work with cities in which the Champlain Towers South developer or contractor developed structures. The county will provide technical assistance and help identify any possible state and federal funding to conduct safety inspections, the mayor added in her tweet.

Attorneys and other industry professionals expect that the deadly collapse will prompt legislative change to existing building codes, much like Hurricane Andrew resulted in stronger building codes in Florida. U.S. Rep. Debbie Wasserman Schultz said in a press conference Monday that she will look at “how we change federal law relating to building inspections” to prevent collapses like what occurred at Champlain Towers South.

Attorney Carolina Sznajderman Sheir, a partner at Hollywood-based Eisinger Law, pointed to the fact that 40 years is not that old in terms of building age. But she said buildings today are faced with new issues that would prompt increased scrutiny.

Sznajderman Sheir and others stressed the importance of proper maintenance, annual inspections and having sufficient cash reserves for required repairs.

“Just because a 40-year recertification is [required], does not mean you should not be doing regular inspections of a building,” she said. “Right now a lot of people are nervous. This is a good wake-up call for people reluctant to do repairs.”