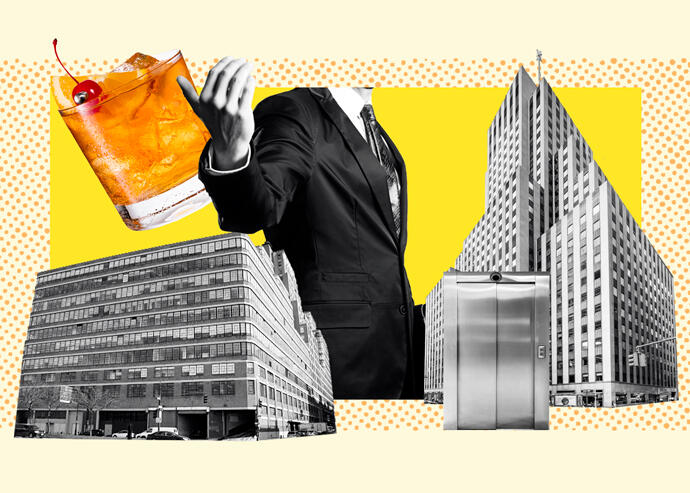 Commercial landlords shake up offices to lure tenants back Looking to lure back tenants who shifted to remote work during the pandemic, large commercial landlords are adding creative new perks to their spaces, the New York Times reported.

Others are ordering their new offices shaken, not stirred. At their building on West 26th Street, RXR Realty and Blackstone have built a 600-square-foot speakeasy into a corner of the ground floor, according to the Times. The hidden bar is part of a larger trend among commercial landlords to retrofit their spaces for socialization-starved tenants.

It’s no longer just free months or cheaper rates. At 1740 Broadway, Blackstone boasts a private tenants’ club and restaurant. Its pitch for the building: “Culture is the ultimate amenity.”

As outlandish as tenants’ requests may get, landlords feel they have little choice. Though the sector’s nosedive appears to be bottoming out, offices remain woefully underfilled. Almost 20 percent of Manhattan office space is up for rent, according to CBRE. That adds up to nearly 80 million square feet of space either unrented or posted for sublet.

Even landlords whose buildings are filled have reason to fret. About a third of commercial leases are slated to expire in the next three years, CBRE figures show. Only a fifth of workers are back in the office, with many likely to never fully return. Amid the glut, rents could dip more than 20 percent from year’s end 2019, according to Nicole LaRusso of CBRE.

“This is a slow-moving train wreck,” Daniel Alpert, managing partner of Westwood Capital, told the Times. “People are dumping space on the market, and it’s all quality space.”

However, some buildings offer a glimmer of hope. At new skyscraper One Vanderbilt, anchor tenant TD Bank just boosted its footprint by 24,000 square feet. In all, SL Green has signed 14 deals for the building during the pandemic, Steven Durels, the firm’s executive vice president and director of leasing, told the publication.