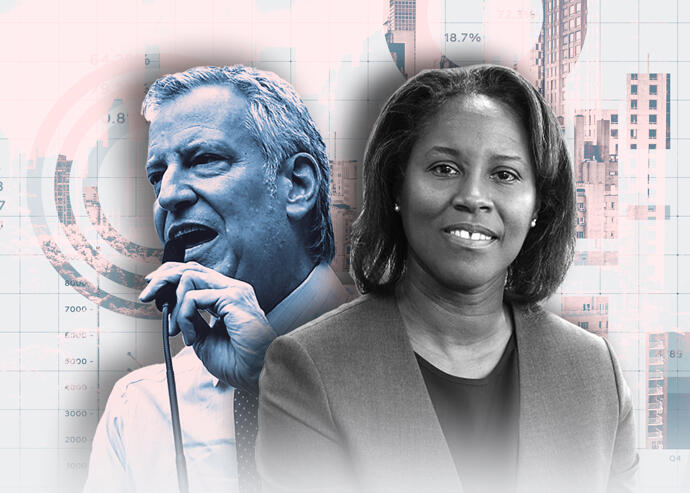 After major cuts last year, New York City’s budget for fiscal 2022 — dubbed the “recovery budget” by the mayor’s office— passed Wednesday, hiking spending to a record $98.7 billion in an effort to fast track the city’s economic comeback, including $14 billion in Covid aid from the federal government.

Real estate went unmentioned in the budget’s “core goals.” But within the $17 million allocated to the Department of Housing Preservation and Development, the city spent bigger on homeowners at risk of foreclosure and provided less than tenant advocates called for to fund free legal services for renters facing eviction.

Property owners have criticized the city for the dearth of direct aid they’ve received during the pandemic. While the state allowed struggling tenants to miss rent payments and avoid eviction, owners have been obligated to stay on top of bills, mortgage payments and property taxes, payments that have pushed some towards foreclosure.

At the end of 2020, one in 10 homeowners in New York state was delinquent on mortgage payments, a rate three times the worst days of the Great Recession, the state Senate cited in a release.

To aid those homeowners, the budget includes $4.25 million in foreclosure prevention, $1 million more than last year, to fund the purchase of distressed mortgage notes and extend counseling and legal services to those at risk of foreclosure.

Another half million will go toward helping homeowners avoid tax lien sales — a consequence of unpaid property taxes or utility bills that can result in the sale of a homeowner’s property. The city’s Department of Finance website said that while tax lien sales were canceled in 2020, they may be held in 2021.

According to DOF data that spans April 2019 through September 2020, there are over 120,000 properties eligible for tax lien sales.

For tenants facing eviction, the budget was less generous. The city set aside $650,000 for Housing Court Answers, a non-profit that sets up tables in court to answer the questions of unrepresented tenants or to help them fill out forms.

The funds are the same as the initiative pulled over the past two years; however, the group said the money they received matches the amount they requested.

Executive Director Jenny Laurie said the nonprofit hadn’t known when they’d be back in courts, so applied for a straight renewal of funding.

Tenant advocates had hoped to gain $5 million to fund Right to Counsel, a program that provides free representation for low-income tenants dealing with an eviction proceeding.

De Blasio expanded the program citywide last month in anticipation of the wave of evictions that could follow the moratorium’s sunset Aug. 31. Tweets by the nonprofit Right to Counsel Coalition NYC said the money would go toward working with 40 tenant organizers across the city to get the word out about the program; however, a scan of the city budget does not show $5 million allocated to Right to Counsel.

The funds would not have gone to lawyers for the program, said Judith Goldiner, an attorney at the Legal Aid Society.

“The caseload in housing court is far reduced from what it’s been,” said Goldiner. “But if we start seeing the kind of caseloads we saw in 2019, for example, 100,000 cases calendered in, there probably isn’t enough funding.”

“This is one area in NYC that urgently needed refunding because, in essence, the lack of it would cause a ripple effect in the city,” said housing rights attorney Leah Goodridge. “To leave tenants without an attorney means more evictions, and more evictions means higher public health concerns during a pandemic.”

Goldiner sees tenant wins in the funding set aside to raise the CityFHEPS vouchers to Section 8 levels and to hire 10 more attorneys to work on source-of-income discrimination cases with the city.

A suit filed on behalf of the Housing Rights Initiative alleged 36 Westchester landlords and brokers discriminated against Section 8 voucher holders. The nonprofit filed a similar suit in March against 88 New York City landlords and residential brokerages, including Corcoran and Compass. Corcoran was hit with another discrimination suit by Section 8 renters last week.

The city also doubled its budget for community land trusts, setting aside $1.5 million for the development and expansion of nonprofits that sell housing but retain ownership of the land — a solution to providing permanently affordable housing in gentrifying areas.

Community Solutions International received $15,000 toward that end and the New Economy Project pulled in $21,111.