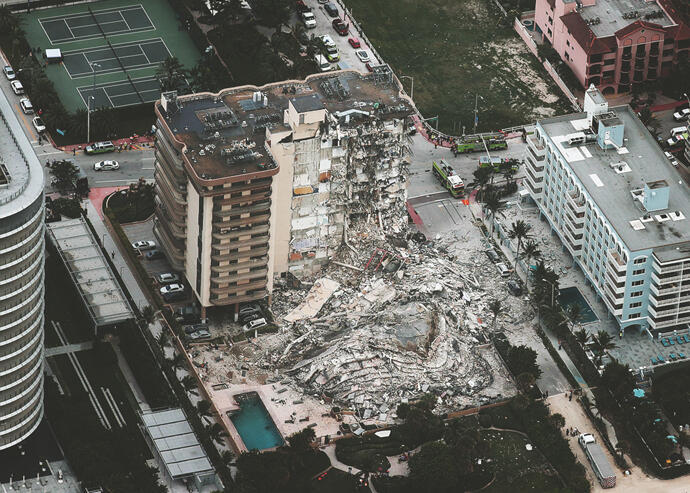 Surfside officials investigated overgrown hedges, lighting that disturbed turtles at the beach and possible short-term rental violations in the years leading to the condominium’s collapse — but not the building’s structural integrity, records released by the town show.

The letter citing overgrown hedges at Champlain Towers South was sent in May, a month before the 12-story condominium at 8777 Collins Avenue pancaked last Thursday. The death toll now stands at 18, with 145 unaccounted for. The search and rescue mission was temporarily halted due to concerns that the part of the building still standing could also collapse.

Since 2019, the town looked into at least 10 turtle lighting code complaints and two short-term rental code issues in 2016, one for failure to pay resort tax and another for not registering, records released by the town show. No short-term rental violations were issued. Aside from annual minimum housing standards inspections, records show code compliance inspected the majority of issues as a result of complaints brought to its attention.

“If these are the types of issues that the municipality was looking into, it may be considered [that they were] turning a blind eye to the true problems that were plaguing the building,” said attorney Daniel Wagner.

The town’s spokesperson, as well as Surfside’s manager Andrew Hyatt, did not immediately respond to requests for comment.

President Joe Biden visited Surfside and Bal Harbour on Thursday, and spoke to rescue crews and loved ones of the missing believed to be buried in the rubble. He said the federal government will foot the bill of search and rescue efforts for 30 days.

During a press conference, he also mentioned that residents who escaped told him about water intrusion from the ocean, and how the building was shaking in years prior to the collapse, when a condo tower was under construction next door, referring to Eighty Seven Park.

Wagner, co-founder of iLawyerUp personal injury law firm, in 2015 filed a lawsuit on behalf of a resident against the Champlain Towers South Condominium Association, claiming water was entering her unit through cracks in the outside wall. The resident survived the collapse.

Wagner pointed to a 2016 housing standards inspection which ended with a note saying “no violations observed.”

Based on the reports, the inspector “may not have done a comprehensive inspection of the entire building,” as the suit his client filed alleged “extreme disrepair of the exterior walls,” he said. The suit was settled with confidential terms in 2017.

Surfside’s code compliance records show other housing standards annual inspections, including one from 2017 that said the only pending issue was modernization of the elevators. One from 2018 said all violations have been resolved.

A former Surfside building official assured Champlain Towers South residents during a November 15, 2018, meeting that their oceanfront tower was “in very good shape,” according to association meeting minutes.

Two days prior to the meeting, a condo association board member had sent the building official a October 2018 inspection report by engineer Frank Morabito that said that failed waterproofing was causing “major structural damage” to the concrete slab below the pool deck and entrance drive, according to records released by the town of Surfside.

Following the report, the Champlain Towers South Condominium Association put out bids for concrete restoration, but no permits were pulled.

In April, condo association president Jean Wodnicki sent a letter to unit owners underlining the importance of completing repairs to the building. Wodnicki wrote of “observable damage,” including in the underground garage that “has gotten significantly worse since the initial inspection.”

Re-roofing work had started, in light of the approaching hurricane season.

The National Institute of Standards and Technology, a federal agency, will investigate the collapse. Miami-Dade State Attorney Katherine Fernandez Rundle also vowed to empanel a grand jury investigation to determine the cause.