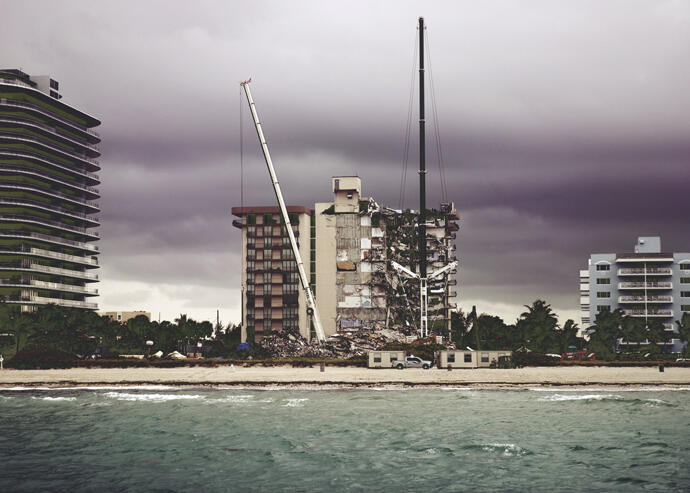 BREAKING: Rest of Champlain South to be demolished Sunday ahead of Tropical Storm Elsa The rest of Champlain Towers South will be demolished on Sunday as Tropical Storm Elsa approaches.

Fire Rescue Assistant Fire Chief Raide Jadallah told family members of those still missing that demolition of the remaining Surfside structure is planned for Sunday, according to the Associated Press. He said the building would be demolished “as soon as possible. First thing tomorrow.”

Levine Cava signed a demolition order on Friday without a timeframe. She assured the families of those missing that the demolition will not interfere with ongoing search and rescue efforts.

Confirmed deaths stand at 24, and 124 people remain unaccounted for more than a week after the northeast portion of the 12-story building at 8777 Collins Avenue came down in the middle of the night. The search and rescue operation was paused on Thursday for more than 14 hours after the portion of the building that is still standing shifted.

“Taking the building down, given the fact the storm was coming and given the fact you were going to have to do this anyways, is the prudent thing to do,” he said during a Saturday morning press conference. “And I think it will lead to the course of action that most minimally disrupts the rescue efforts.”

The state will pay for all costs associated with the demolition, DeSantis said.

Surfside Mayor Charles Burkett congratulated the mayor for taking action so that the demolition could happen as early as Sunday.

“The fear was that the hurricane may take the building down for us, and take it down in the wrong direction on top of the pile where we have victims,” Burkett said during the press conference.

The collapse prompted Miami-Dade County and other municipalities to audit older buildings, which already resulted in the evacuation of more than 300 residents at a North Miami Beach condo complex. An inspection report from January, submitted on Friday, determined the 156-unit Crestview Towers Condominium at 2025 Northeast 164th Street was structurally and electrically unsafe.