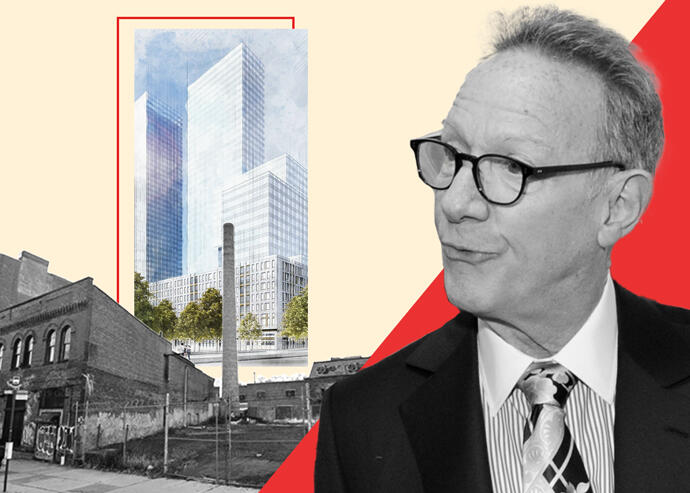 Continuum Company founder Ian Bruce Eichner, the former spice factory at 960 Franklin Avenue and a rendering of what he proposes to build there (Getty, Google Maps, Continuum Company)

It’s just an abandoned spice factory — a beat-up, vandalized, forgotten plant in Crown Heights that hasn’t made a strand of saffron in 20 years. Next door, barbed-wire walls frame an empty square of gravel. A yellowing smokestack soars above the stout brick buildings nearby.

But in recent months, the decrepit property has become the locus of an intense rezoning battle, stirring up long-festering concerns in Central Brooklyn over gentrification, development and affordable housing. And a new one: shadows.

Two blocks west, tens of thousands of plants at the Brooklyn Botanic Garden gorge on unobstructed sunlight thanks to the low-rise buildings beside it — the spice factory, for example.

While the garden’s greenery thrives, many of Brooklyn’s human residents struggle to lay down roots. The median home price in Brooklyn rose by 89 percent over the last decade to $915,000, according to data from StreetEasy. About 1 in 4 households in Crown Heights’ City Council district spend more than half of their monthly income on rent, according to the Institute for Children, Poverty, and Homelessness.

One proposal to close that gap championed by Eric Adams, the Brooklyn borough president and presumptive next mayor, is upzoning low-rise buildings to make way for more housing. Since 1991, the zoning for the spice factory site, 960 Franklin Avenue, has capped building height at 70 feet. Then-Mayor David Dinkins did that specifically to preserve the Botanic Garden’s unobstructed sunlight.

In April last year, Eichner’s Continuum Company filed plans for a massive development there. The megaproject’s centerpiece, two 39-story towers, would rise from a base of smaller glass structures, spanning some 1.4 million square feet. The project would create more than 1,500 residential units, roughly 790 of which Continuum says it would earmark as affordable.

Opposition to the project was immediate. The Botanic Garden, with $5.8 million in cash and a reported operating budget of $23 million, quickly organized against it. The nonprofit’s Fight for Sunlight campaign warns of “irreparable damage to the Garden” should Continuum’s towers be built, blocking sunlight to the plants for several hours a day.

An environmental impact statement conducted by the city, which consulted horticulturists and arborists, found that “the decline of plant health is not anticipated for the vast majority of plants.” However, it did note that for more sensitive blooms, “significant adverse impacts are likely.”

The Parks Department objected to the study’s shadows analysis: “NYC Parks does not agree that the information … provides a basis to conclude that project-generated shadows would not lead to significant adverse impacts to natural resources,” David Cuff, the department’s environmental review head, wrote in a December 2019 memo.

The review points to an alternative plan that reorients the towers to block less sunlight, but stops short of endorsing it.

The Botanic Garden found friends in City Hall, too. After initially supporting the project — apparently confusing it with one nearby — Mayor Bill de Blasio reversed course in December, calling it “grossly out of scale with the neighborhood.” Council member Laurie Cumbo, who represents the district, and Council Speaker Corey Johnson followed suit in February, panning the project in a joint statement.

At the community level, Alicia Boyd, a controversial local activist, Cumbo nemesis and thorn in developers’ sides, mobilized her group, Movement to Protect the People, against the project.

In March, Boyd delayed the rezoning review with a lawsuit alleging public hearings on Zoom would prevent some residents from weighing in.

Continuum, though, plowed ahead. As Community Board 9 prepared for the non-binding but tone-setting first vote in the review process, Continuum, which did not respond to requests for comment, hired Mercury Public Affairs to organize grassroots support for the project.

Mercury has a long history of bending the political narrative in favor of its clients. In one classic example a decade ago, the firm helped torpedo a bill that would have legalized wine sales in New York grocery stores. Its client was a trade group of liquor store owners which it folksily named the Last Store on Main Street Coalition.

Mercury’s website boasts “unparalleled government relations expertise on Capitol Hill, in statehouses throughout the U.S. and within local city councils.”

In April, Mercury published social media pages and a website under the name Housing for All New York. The site calls the group a “coalition of activists, working people, labor union members, and residents of the community.” Its Facebook page has 13 likes; not to be confused with that of similarly named tenant-rights group Housing Justice For All, which has 5,255.

The firm also launched a digital ad blitz on behalf of the project, focusing on Central Brooklyn’s affordable housing shortage. The campaign has a “five-figure” budget according to Jake Dilemani, a Mercury strategist and spokesman for Housing for All New York.

Other key support has come from unions. While they may never have heard of Housing for All New York, labor leaders have been vocal in their support of the project.

In June, Kyle Bragg, president of the property service union 32BJ SEIU, and Gary LaBarbera, who heads the Building and Construction Trades Council, wrote an op-ed in Crain’s calling the 960 Franklin Avenue project “a model for how smart economic development could be a boon for community residents and for the union members who would build and maintain it.”

Indeed, unions are deeply involved in the project, which would be built by construction unions, maintained by 32BJ members, and receive financing from the AFL-CIO Housing Investment Trust.

The Housing for All NY group focuses heavily on that union support. It also paints the tower’s opponents not as concerned residents, but illegitimate critics: “We demand the out-of-touch elitists framing the construction of affordable housing as a plot to block the sun tell the truth — it’s really a problem with housing for regular people who work in the neighborhood,” one section reads.

To be sure, Continuum’s project is a for-profit endeavor. Its market-rate units are expected to not only subsidize the affordable ones but also to generate enough money to justify the developer’s risk and effort. By the same token, without the profitable units, the income-restricted ones would not be built.

Even as public opposition swells, the developers maintain that a quiet core of support exists, but are not the types to testify at community board meetings. “The most vocal people are typically not reflective of the majority of people, who would be positively impacted by the project,” said Dilemani.

On June 23, Community Board 9 convened over Zoom to finally hold the first vote on 960 Franklin Avenue. Its president, Fred Baptiste, said the board received over 200 written testimonies in anticipation of the meeting. “The response was overwhelming in one direction,” said Baptiste.

So was the board’s vote: 23 to 2 margin against the rezoning.

But it went a step further, resolving that the original 1991 zoning should remain in place indefinitely, and that proposed scaled-back alternatives should also be denied, as the developer had not given the board sufficient documentation on their environmental impacts.

“At the end of the day, we really couldn’t support the project because the sheer scale is unprecedented,” said Baptiste. On top of concerns about the Botanic Garden, Baptiste pointed to quality of life concerns.

Next stop on Rejection Road is Adams’ desk. As with the community board’s vote, the borough president’s opinion is advisory but influential.

Despite opposition to the proposal from local activists, the community board, the local Council member, the Council speaker and the mayor, the project is not dead. Continuum has a trump card: It can build a smaller-but-still-large, 100 percent market-rate building under current zoning.

That is what Fortis Property Group did at the Long Island College Hospital site in Cobble Hill when it couldn’t make a rezoning deal with Council member Brad Lander several years ago.

Continuum’s version could climb seven stories tall and house nearly 550 units, according to an analysis by Gridics, a real estate software firm. Continuum says its as-of-right condo project would have 518.