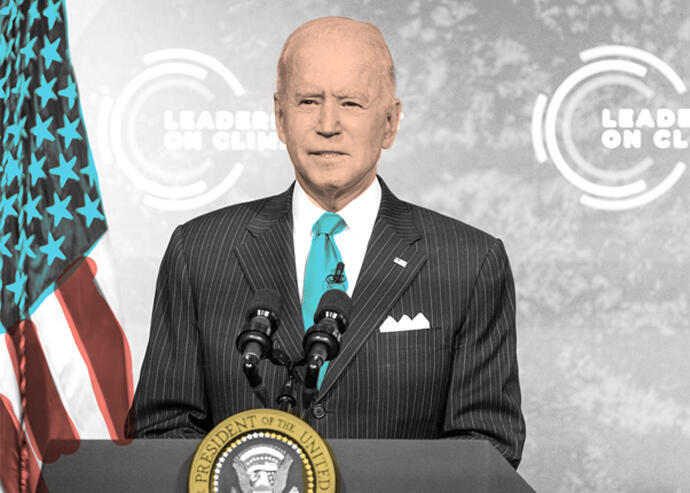 President Biden at the Leaders Summit On Climate. (Getty)

If President Joe Biden is to slash the country’s greenhouse gas emissions in half by 2030, he will need a lot of help from residential and commercial buildings owners.

The president announced the goal, which is based on 2005 emission rates, Thursday during a global climate summit. The new target greatly accelerates the Obama administration’s reduction target of 25 percent by 2025.

Biden billed his goal as a way to both address an “existential crisis” and “create millions of good-paying, middle-class, union jobs.”

“I see the engineers and the construction workers building new carbon-capture and green-hydrogen plants to forge cleaner steel and cement and produce clean power,” he said. “That’s where we’re headed as a nation, and that’s what we can do if we take action to build an economy that’s not only more prosperous, but healthier, fairer, and cleaner for the entire planet.”

Residential and commercial buildings respectively accounted for 19 percent and 17 percent of carbon emissions from fossil fuel combustion (including allocated electricity emissions) in 2019, according to the U.S. Environmental Protection Agency.

Much of their energy consumption comes from electricity for heating, cooling and operating appliances, along with natural gas for cooking and heating. Together, these properties made up nearly 40 percent of the country’s energy use that year, according to the U.S. Energy Information Administration.

Though full details of Biden’s proposal have not been released, the administration has indicated it will invest in the electrification of new buildings and retrofitting existing ones. Doug Vine, director of energy analysis at the Arlington, Virginia-based Center for Climate and Energy Solutions, said initial steps for property owners could include providing charging stations for tenants’ electric vehicles and upgrading heating systems.

“It is about getting the incentives right and prioritizing the things that are going to move the needle,” Vine said. “We cannot get to zero without responding to the emissions from the building sector.”

“[Federal officials] still have a strong role to play in supporting buildings,” he said. For instance, Washington could further incentivize building retrofits and the development of high-efficiency technologies.

He said the federal goals complement New York City’s, including Local Law 97, which calls for a 40 percent reduction in citywide greenhouse-gas emissions by 2030 and 80 percent by 2050. James Whelan, president of the Real Estate Board of New York, commended Biden but blasted the city’s approach to climate change. His group has criticized the local law’s emission caps as unreachable for some buildings and has advocated for new ways to comply.

“Hopefully [Biden] will avoid the mistakes made in New York City and prioritize planning and tangible progress over ideology and lofty rhetoric,” Whelan said in a statement. “To effectively decarbonize buildings and achieve our shared goals, it will be crucial for the federal government to deliver significant investments in renewable infrastructure, including generation and transmission, and building efficiency rather than simply putting unworkable mandates on buildings.”