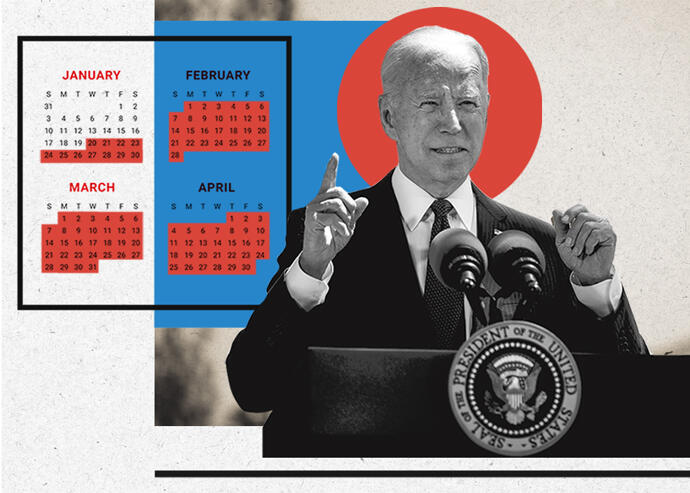 The partial demise of that tax break, mentioned briefly as part of the American Families Plan, is just one of several policy initiatives affecting real estate that have started to take shape under Biden, some of which fulfill promises he made on the campaign trail.

As Biden marks his first 100 days in office on Thursday, here are the five issues that the real estate industry is watching.

That “special tax break” the Biden administration alluded to is the 1031 exchange. Also known as like-kind exchanges, it allows real estate investors to defer capital gains taxes by funneling the proceeds from a sold property into a new one. Ultimately, this means investors can defer tax liabilities indefinitely by repeatedly selling properties and rolling the proceeds over.

The American Families Plan, which would help fund access to education and child care, would eliminate 1031 exchanges in cases where the gains are more than $500,000. Industry experts have warned that changes to the program would prove economically devastating as the nation recovers from the pandemic.

During his campaign, Biden vowed to reform the Trump-era tax incentive aimed at encouraging development in designated “distressed areas.” But the question remains: What exactly will his administration try to do?

On the campaign trail, Biden identified a few areas he sought to change, including increasing reporting requirements for investors. He also floated an incentive for Opportunity Zone funds to partner with community organizations to ensure that investments are dedicated to distressed areas.

The key concern with the program is that it has failed to fulfill its goal of infusing investment in low-income communities. The program allowed investors and developers to defer unrealized capital gains by investing in “opportunity funds” that would, in turn, pour money into underserved communities.

The latest report to find fault with the program was published last week by researchers from the University of California, Berkeley. It found that only 16 percent of the 8,000-plus census tracts designated as Opportunity Zones received investment in 2019. It also concluded that much of the money was sunk into real estate, construction and finance businesses in areas “with pre-existing upward trends in population, income and home values” and with fewer elderly and non-white residents, according to the New York Times.

Shortly after his inauguration, Biden signed executive orders instructing the secretary of the U.S. Department of Housing and Urban Development to study the effects of the Trump administration’s actions on key fair housing measures. One was the 2015 Affirmatively Further Fair Housing rule, which required local governments that receive federal funds to identify discriminatory housing policies and map out plans to combat them. Donald Trump repealed AFFH last summer.

Another was the “disparate impact” rule, which codified a legal standard allowing claims of housing bias to move forward in cases where there wasn’t an explicit intent to discriminate. Last September, Trump upped the standards for such claims, establishing a five-pronged test for pursuing allegations of unintentional discrimination.

This month, HUD took the first formal steps to reinstating the AFFH and “disparate impact” rules.

There is a lot packed into Biden’s $2 trillion infrastructure plan, which not only pledges funds to roads, bridges and public transit, but also proposes changes to zoning laws and the public housing system.

The plan reportedly includes funding for the long-delayed Gateway Tunnel under the Hudson River, a lifeline for commuters and nearby property owners when existing tunnels are eventually shut down for much-needed repairs. It also calls for the construction or rehabilitation of 500,000 homes for low- and middle-income buyers and an infusion of $40 billion into the country’s public housing system. According to a fact sheet on the plan, Biden is also pushing to eliminate exclusionary zoning laws including bans on multifamily housing.

Last week, the president pledged that the U.S. would halve its emissions, from 2005 levels, by 2030.

The plan’s success will rely, in part, on property owners. In 2019, residential and commercial properties accounted for 19 percent and 17 percent, respectively, of carbon emissions from fossil fuel combustion, including allocated electricity emissions, according to the U.S. Environmental Protection Agency. Buy-in from those sectors will likely rely on incentives and investment at the federal and local levels in electrification and retrofitting programs.