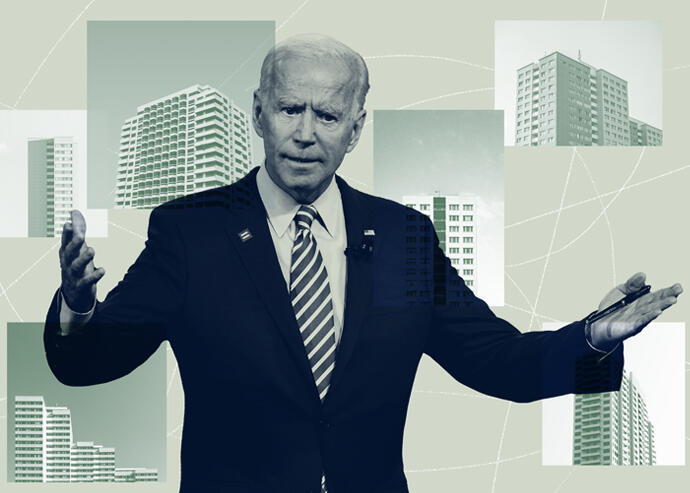 Biden’s proposal to cut 1031 exchanges may be “tremendous blow” to real estate: experts Last spring, Newmark broker Ken Zakin was hustling to find a buyer for a client’s retail property in Queens. The tenants had stopped paying rent because of the pandemic, leading to a major loss in income for the landlords, a family that owned the building for four decades.

Zakin planned to take advantage of the 1031 exchange program, which allows real estate investors to swap one investment property for another while deferring capital gains taxes. He’d sell the retail complex, then use the proceeds to buy a more stable income-generating property for the family.

Then came then-presidential candidate Joe Biden’s campaign proposal to eliminate the popular tax deferral tactic, also known as like-kind exchanges, as part of a broader plan to finance child and elder care. Though it was merely an idea at the time, Zakin said it started a countdown clock — he needed to get the deal done on the off chance that his client might lose the deferral benefit.

“We were definitely focused on closing it before the end of the year,” said Zakin.

Zakin’s client was one of many real estate investors who jumped through hoops to complete 1031 exchanges before the end of 2020, anticipating the program could be cut if Biden was elected president. And 100 days into his administration, the president has called for partially eliminating like-kind exchanges.

Now, investors and their advisors are stepping up efforts to preserve the tax break — and to mitigate the potential impacts that they’ve feared for months.

The proposed change to IRS Section 1031 — which would affect real estate investments where the profits exceed $500,000 — is part of Biden’s $1.8 trillion American Families Plan, which targets several longstanding tax loopholes to fund early education, direct payments to families with children and more.

But some experts believe losing like-kind exchanges could be more harmful than helpful.

Targeting 1031 exchanges reflects a “misguided view of the actual purpose and benefits of like-kind exchanges,” said Suzanne Baker, general counsel for Investment Property Exchange Services and co-chairperson of the Federation of Exchange Accommodators.

Eliminating the program would impact real estate investing across multiple sectors. A 2019 survey from the National Association of Realtors found that multifamily properties and single-family rentals made up a chunk of 1031 exchanges among its members, with many done by smaller investors.

Net lease properties, such as single-tenant Walgreens, McDonald’s or 7-Eleven stores, are also popular for like-kind exchanges — around a third of those buyers have used the program, according to Alex Sharrin of JLL, who oversees the firm’s national net lease investment practice. Those investors can grow their wealth and defer taxes while also collecting rent checks.

In the fourth quarter of 2020, $16.4 billion was invested in triple-net properties nationally, up 7 percent compared to the prior year, according to JLL Research. The increase is significant, especially considering that sales volume fell in most other asset classes, Sharrin said. He noted that many of those deals were investors swapping properties in high-tax states for ones in states where taxes are lower.

“It’s safe to assume there would be a strong incentive for investors sitting on large unrealized gains to pursue exchanges which would obviously be a strong tailwind for the remainder of 2020,” he said, in response to Biden’s proposal.

Marc Landis, who heads real estate practice at New York-based law firm Phillips Nizer, said that fewer real estate deals would be a “tremendous blow” to state and local governments that are already on weak financial footing due to the pandemic.

“If the transaction volume is driven down, that’s going to be another hit on tax collections,” he said.

Investors may rush to swap properties before the tax break is eliminated — but the process isn’t always a simple one.

In September, Newmark’s Zakin successfully sold the Queens retail property for more than $10 million. He then identified three income-generating replacement properties, including a net-lease auto-service shop in Columbia, South Carolina, and completed those sales in early December.

“It wasn’t that big a transaction, but it was complicated,” Zakin said. “And there was a lot of pressure. Because my client had put so much faith in me, I felt a lot of responsibility to do everything right.”

CBRE’s Anthony DeLorenzo, who specializes in investment sales in California and beyond, said one of his clients recently sold an office building in Orange County for about $9 million, and hopes to complete an exchange with a single-tenant retail property.

But because of the strict timeline for 1031 exchanges — replacement properties must be identified within 45 days of the closing of the original sale — not all investors may be able to reap the benefits.

Property owners in the industrial sector may also be in a race against the clock. Deals for factories and warehouses can’t always be made quickly, according to Landis.

“For them to be able to accelerate the sale of an original property, and quickly identify a replacement property that meets their investment goals, and close on that property in a short time frame,” makes a quick exchange difficult, Landis said.

Scott Caswell of Lee & Associates LA North/Ventura in California helped a client sell an industrial property in Los Angeles’ Van Nuys neighborhood in November for about $3 million to a 1031 exchange buyer. Spurred by Biden’s proposed changes, Caswell’s client wanted to finish his own like-kind exchange before the end of the year, but ended up paying taxes instead.

“As it turned out, as much as he thought he was going to find a replacement, he couldn’t find something that he was satisfied with,” Caswell recalled.

The industry has already been working to preserve like-kind exchanges, and those efforts are likely to accelerate.

In mid-March, a coalition of 31 trade associations — including American Farm Bureau Federation, American Hotel & Lodging Association, Mortgage Bankers Association and National Association of Realtors — sent a five-page letter to treasury secretary Janet Yellen and members of the Senate Finance and House Ways and Means committees, underscoring the importance of 1031 exchanges to the nation’s economic health.

Citing research from Ernst & Young, the letter said that like-kind exchanges support an estimated 568,000 jobs, generating over $55 billion annually, in addition to $27.5 billion in labor income. It also asserted that provision helps prevent properties from being “underutilized and underinvested.”

Investment Property Exchange Services, also known as IPX1031, has an ongoing campaign to preserve 1031 exchanges, encouraging people to send emails in support of the program to their elected officials.

How the Biden administration specifically plans to tackle like-kind exchanges remains to be seen, said Garrett Watson, a senior policy analyst at the Tax Foundation. And enforcing regulations may be tricky; no matter how the law is written, real estate lawyers may try to come up with a way to minimize the impact. To get around the $500,000 ceiling, for example, investors may try to divide up a property to make the profits smaller before exchanging it, Watson said.

“It’s one thing to put this on a fact sheet,” he added, “But it’s a whole other thing to try to figure out the rules.”